As mentioned in a couple of earlier blog entries, the Friday night gaming group began the Shadows of Esteren game campaign with the start of character generation. So I figured that I would go into the session from Friday night somewhat.

For those who don't know, Shadows of Esteren is a mediaeval fantasy roleplaying game with horrific and gothic influence. The game is set on a peninsula attached to a continent, but the continent is not the focus of the game (though it definitely has a strong influence on matters). The game also has a bit of a steampunk element to it as well, but that's more along the lines of a fantasy steampunk vibe, so that's not necessarily a bad thing. There's a lot more to it than that, of course, but that sums it up in a nutshell. 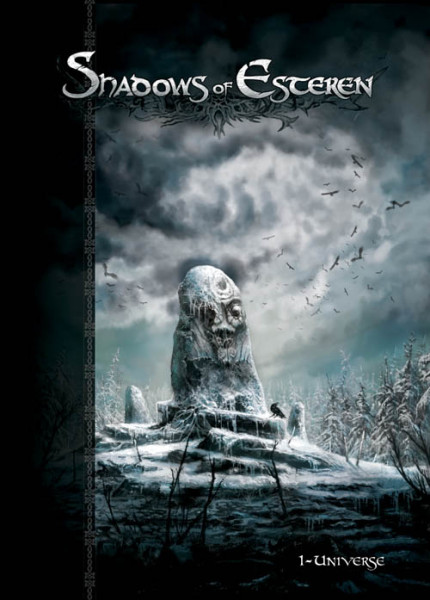 The six players, plus my goddaughter Ellie, sat down with me, the large game world map under glass on the table, and started to create their characters. The first two and a half to three hours were spent going over the game world in some detail. The reason I did this with the Friday night players was because the game is very much a layered world in some ways, there is so much detail on the world (even if told from the pov of characters living in the world), and this game is very much about building a *character* for this world rather than just a set of game numbers.

The process of character creation in Shadows of Esteren is quite long and somewhat more involved than a few other game systems, as you can see in my detailed write-up on Reyaldine here, but the Friday night players always tend to enjoy somewhat detailed character generation. They tend to prefer the roleplaying elements of games to the roll-playing ones, and this game seems tailor-made to their needs in that regards, with characters that are very much rooted in their psychology and personality. In any event, after going through the physical game world, the elements of the cultures and other societal aspects of the peninsula of Tri-Kazel, and answering a lot of player questions about different aspects of the characters, it was time to get into the game mechanics and numbers.

One of the really interesting aspects of the Shadows of Esteren game and player characters is the strong social and psychological aspects of the characters, and the fact that Sanity in this game is not just a phrase used to describe a somewhat meaningless concept that players pay lip service to at the best of times. Sanity in Shadows of Esteren is a concept that the player characters adored when we discussed it, and they were looking forward to its implementation as it concerned their player characters. After going over the basic game mechanics, so the players could get an idea of how all the numbers the players are going to generate for their characters connect in various ways, we got down to it.

Suffice to say, the group of player characters are somewhat diverse, and look to have an interesting set of relationships among themselves. Bear in mind that the number generation is barely a quarter of the way done, but here's how the player characters are shaping up. Kathy has created a Gwidrite ex-thief (surprise!) who now leads a bit more sedate life in a small village. Nick went the route of a Reizhite former soldier with an interesting sideline, now living in a small community in Taol-Kaer. Tom has chosen to play a Talkéride peasant whose dull, unadventurous life is about to take a turn for the...different. Joanne decided to play a Talkéride Demorthèn with what may be a serious mental complication or two (depending on how the rest of character creation goes). Angela has gone down the road of playing a Varigal born and raised on the Gwidrite/Taol-Kaer border whose view on life seems to be going in an interesting direction. David has opted to a Merchant character with some tendencies to explore the continent. Finally, my goddaughter, Ellie, is creating a Tarish (a nomadic people akin to gypsies in some ways) youngster who was abandoned on one of the other player character's doorsteps (she hasn't decided whose, just yet).

So far, an interesting group of player characters, but there's still so many decisions to be made about some aspects of the characters. But that will have to wait until this coming Friday night.

Ah, a lovely, crisp (some would say brisk) Sunday morning in the Ottawa valley.

I woke up this morning, and decided to take a 20-minute walk before breakfast, since I really do need to get as much fresh air as I can, and while it was a bit brisk (around 30C) outside, I put on a warm sweater and did as I had promised I would.

After returning to the house, I went inside and started to make a nice, simple omelette with a bit of ham, spinach, and cheese. While cooking the omelette, I turned on the tv and saw, to my surprise, that the SPACE network was running a marathon of Primeval episodes, seemingly having started with the first episode, and running all the way through (according to

spross, whom I called) 'til 7:00 pm tonight. That'll get them through about half of Series 2. Neat development. Makes me wonder if they're doing this as a lead-in to the Primeval: New World series later this month, mayhaps?

After breakfast, I sat down and wrote up the previous journal entry on the Friday night session of character creation for Shadows of Esteren, and I'm just getting ready to hop in the shower before starting the character generation process with the Sunday group (minus Douglas, who won't be out today).