Well, I don't know what I've caught, bug-wise, but it seems to be well and truly entrenched.

While I'm not running a fever, I've got a bad cough, lots of phlegm, stuff head and sinuses, and a few other symptoms that I'm not going to bother mentioning here.

Suffice it to say, I called work and told the boss that I'm sick and won't be working today or possibly Monday. He was quite sympathetic, and just asked me why I called him by my former boss's name!

In the meantime, I'll let Kathy and the Friday gaming group know later today that we won't be gaming this evening. I can barely talk as it is, so...

Sarah Werning talks about why palaeontology isn't just a "gateway science". It's a powerful way to understand past and future of life.

Why Palaeontology is Relevant

"Sexual parasites" aren't unpleasant exes, or irritating little hitchhikers, but an even stranger category of creatures...

Baleen whales used to have teeth, and over on the National Geographic website, palaeontologists have just announced 4 (!!) new species of the archaic cetaceans!

Women in Paleontology: Where are they?

Supposed parasites of pterosaurs and feathered dinosaurs turn out to be amphibious flies.

Amphibious Flies and Paedomorphism in the Jurassic period

Although dinosaurs and other Mesozoic critters may have suffered the bites of super-sized fleas.

As part of the continuing series of photos I took at the Canadian Museum of Nature, here's another couple of photos that I took.

Plesiosaurs are so big that, well, it requires two views of it from the front and the rear. :) 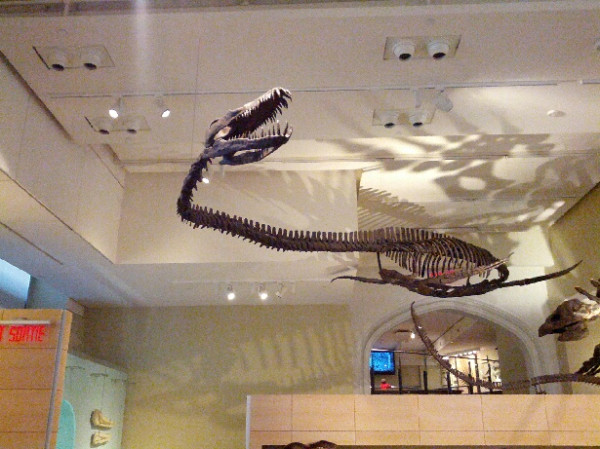 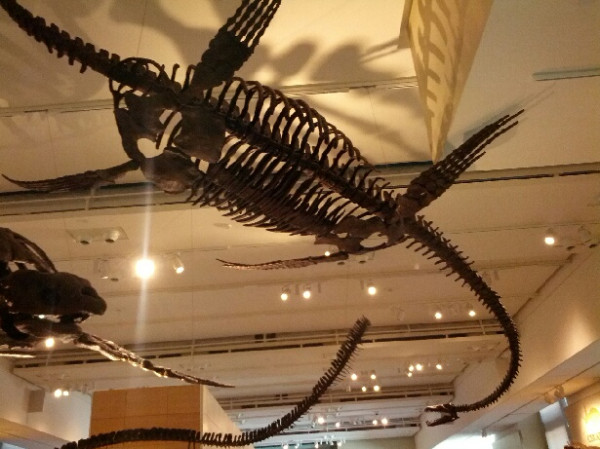 Absolutely awesome creature, and quite terrifying.

I just spoke... well, made myself understood, at any rate, and informed Kathy and the rest of the Friday night gamers that tonight's session of a|state is not going on. The reason being... well, let's just say that I'm hacking away and feel somewhat beyond exhaustion.

I went out and did a bit of grocery shopping for stuff. There's just certain stuff that you cannot find in the stores on a Saturday afternoon, and so I went out and picked a few things up. A bit of rest now in bed, and a couple of Tylenol are next on my plate. Supper, maybe later.

Okay, let me get this straight...

The ratings on Canada's Space Channel for the Primeval: New World tv series weren't great, heck they weren't good. So, they cancelled the series. I understand the premise behind the cancellation... NOT!

To be honest, the series had actually picked up steam as it wended its way through the five final episodes of the first season, and was getting much better, starting to focus a bit. The acting on the series was a bit lacking in places, but even that was getting better and the characters were beginning to come to life for the viewers. Not just that, the series was finally getting ready to air in the United States, and is airing already in several other countries where the ratings appear to be adequate.

And what does Space go out and replace Primeval: New World with? Robot combat leagues; Ripper Street (which I like but isn't all that science fiction/fantasy to me; Bitten, a series based on the Kelley Armstrong series of vampire/werewolf novels (oh, no! not another series about those!), and...and... airing the Castle detective series with Nathan Filion from the beginning!! Now don't get me wrong, I liked Castle for a couple of seasons until they had the two characters sleep together (ooooh, spoilers!), but on Space????

Primeval: New World, like its British parent show, is one of those series that you can't just give 13 episodes and expect it to get massive ratings on a station that hasn't really done all that much advertising and distribution of the series. Not to mention, it didn't actually concentrate on what made the original UK series so good - the Anomalies and dinosaurs/prehistoric beasties.

Frankly, I think this is just an absolute travesty, and I really hope that the series goes on to find a new home with a tv company that actually respects what they were trying to do with this show. So here's hoping that Primeval: New World surfaces somewhere else, and puts Space and what they did to it to shame.

In the meantime, I guess I can do nothing but await the arrival of the series DVDs.
Collapse