Whatever I've caught or got, it's not letting go of my body at all. While I don't seem to be running a fever (95.6oF), my chest and upper back hurt, the coughing tends to wrack me when it happens and I'm coughing up some bloody stuff when it comes up, my head is completely blocked (though the Tylenol Sinus helps somewhat), and it hurts to use my arms a lot. The latter is probably due to the chest muscles being abused when I'm coughing. Heck, who am I kidding? Breathing hurts a bit, but that may just be the strained chest muscles.

I don't fight off infections or whatever this is all that easily as a rule, but I've been feeling... I don't know, somewhat worse, as this goes on. And I probably didn't help myself when it started last Wednesday by going out and doing stuff on Wednesday through Saturday (including a trip to the doctor's office). The problem is that I don't know what to do, and my somewhat addled brain state isn't helping in this regard. On top of that, the car is buried from the snow storm and I don't want to go anywhere and thus have to clean the car off (not like my aching body wants to do that).

Just sick. Hate my life. And am getting worried.

Why do you have such a crappy immune system?

Why can't you fight off this infection, whatever it is, with a minimum of fuss?

Why am I bothering to write this blog entry? You don't care, do you?

Like I don't have enough on my plate right now...

The snow continues to fall, my car is absolutely buried and I don't have the strength to dig the damn thing out even if I was feeling well enough to do so, and... Ah hell, just look at the photo. 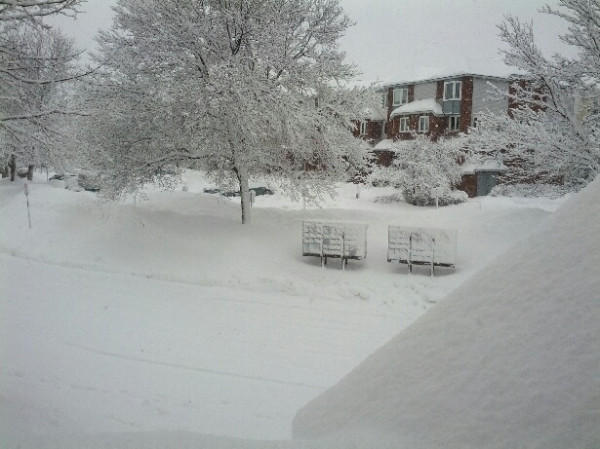 Further to the blog entry with the new abstract about crocs that crunched dinos, here's some additional thoughts on that one.

In the third entry of the FossilPlants series on "Prehistoric Plants", the letter "C" gets its turn.

Another entry from the folks at FossilPlants, the fourth entry in the series on "Prehistoric Plants", gives you the letter "D"...

Over on the Slate website, there's an interesting piece: Did we doom the mammoths? And can we find lessons about the future in the details of the Pleistocene extinction?

Did We Doom the Mammoths?
Collapse