I woke up this morning feeling somewhat better than I have the last few days. At least, until I got out of bed.

I've spent the early part of the morning just puttering around, doing a bit of reading, and otherwise just taking it easy after breakfast and with my morning cup of decaf coffee.

I don't actually have any set plans for the day, other than to possibly go over to the WIND Mobile store this afternoon. We'll see how things shape up, and how I feel as the day progresses.

I've been home for about half an hour after an afternoon jaunt out, and am somewhat exhausted.

spross came over this afternoon, after lunch, and we went out and took care of a few things.

The first stop on the itinerary was over at the WIND Mobile</i> store so that I could pay off my bill for the month. The fellow that I usually deal with there wasn't around, but I did learn that service in Ottawa has recently been improved with the addition of several new mobile towers.

spross mentioned that he's now in a roaming zone, as opposed to being in a non-network one. It's good to hear that they're spreading out a bit more in the Ottawa area.

From there, we drove over to one of the CD Warehouse locations, as

spross wanted to sell a bunch of his CDs for various reasons, but primarily because he hasn't listened to them in a while. He ended up selling a batch of the ones he'd brought with him in a box, but took him a whole batch because they wouldn't buy some of them and because I convinced him (I think) to keep some of the others. While we were there, I looked around at a batch of CDs by different artists, but nothing jumped out at me and said "Buy me!".

From there, we went over to one of the Tim Horton's in Ottawa East, and had a snack of a marvellous bowl of beef noodle soup. It was an amazing bowl of soup, rich and hearty, but I would have liked it a bit hotter. 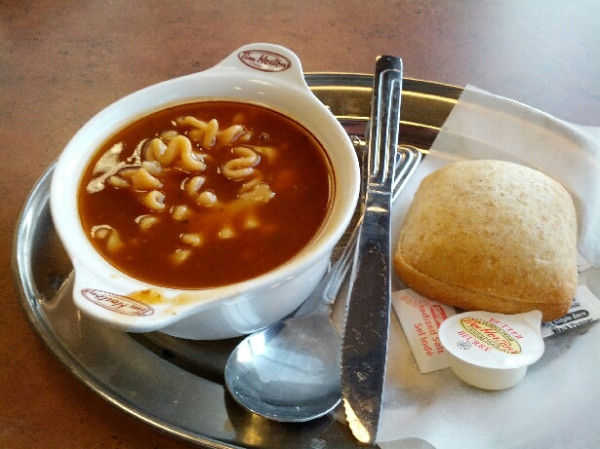 Satisfied by the snack out,

spross gave me a lift back to the house, and then headed home himself.

Overall, a good afternoon out and about, though by the time I got home, my left ankle and leg were throbbing somewhat fierce. I've been sitting for 20 minutes or so with my leg elevated, and feel somewhat better. Going to make a cup of tea, and then relax for a bit more before supper this evening.
Collapse