I have something of a light day today, so that's going to be good.

For that reason, I plan to post up several more of the game session reports of my Yggdrasill game campaigns notes here on the blog.

So for those who don't care about the rpg stuff, have patience. :)

And for those who do care for that stuff, enjoy! :)

May the Goddess bless you with happiness, good health, love, prosperity, and good cheer for the coming year. And may a warm breeze always blow at your back.

Looking forward to seeing what sort of stuff you get up to Primeval-wise, but start off with a Happy Birthday and toss down a draught or two (or whatever your beverage of choice) is for me this day. :)

Here's the fourth session report on the Sunday afternoon Yggdrasill game campaign. This session dates back to October 20th, 2013. You can read about the previous session of the campaign in this journal entry. This post is somewhat long, so I've put it behind a cut so that folks who don't want to read any detailed rpg posts don't have to.

The Sunday gaming group continued to play in their Yggdrasill RPG campaign, and seemed to have had a pretty good game session of it.

Tammy is doing a pretty good job of playing her character, Dagmar Ivarsdottir, and is rather enjoying getting into her character and dealing with the day-to-day issues of being a volva as well as the basis of the current scenario that they've just started.

spross, on the other hand, is struggling somewhat with his character, Adalstein Ulfarsson, for some pretty apparent reasons. He has no grasp on the character's personality, character background, and history, and hasn't really done up a character background as far as I can tell, and is playing the character extremely inconsistently. He knows about this (I've been over it with him the past week or so). Given the character's got this major, campaign-shaking plot going on, he really needs to get his act together for this, or the game will likely fall apart.

As for the adventure itself, the current scenario deals with some of the aftermath and fallout of

spross's main plot, and that part of the game is developing nicely. Tammy's got the sense of social responsibility that goes along with the Norse culture, but the problem is that SteveR's lacking in that respect, and there are several issues of how the two characters are going to function together, if at all, in this situation.

Since I won't be running any games for the next two weeks (stuff going on next weekend, and then the weekend after that is HammerCon), I'll have time to figure out how to proceed with the major plot, and see what I can work out for the smaller plot going on.

Here's the sixth session report on the Friday night Yggdrasill game campaign. This session dates back to December 6th, 2013. You can read about the previous session of the campaign in this journal entry. This post is somewhat long, so I've put it behind a cut so that folks who don't want to read any detailed rpg posts don't have to.

The Friday gaming group had a pretty good game session.

The Friday night group continued their game of Yggdrasill, the scenario having been interrupted by the trip to HammerCon at the beginning of November and then interrupted again by my bout(s) of illness since then.

The scenario that is in progress wrapped up quite neatly last night, the player characters having one very large combat with a group of brigands and making some friends from a town down the river. There was some lovely game interaction between the player characters and several of the NPCs from the neighbouring (despite the significant distance in these Norse times) town, and the group worked well together once more. The relationship between Angela's Sigrun Evardsdottir and Tom's Vigfur Egilsson is starting to heat up, and that between Sigrun and Kathy's Ingrid Horoldsdottir is coming along quite nicely as well. Magic use in this particular session was quite prevalent, with both Joanne's Dagna Styrsdottir and David's Amund Torkelsson using their Seidr and Galdr magics respectively in combat, fast casting their spells (and suffering some spectacular problems when things didn't go as expected).

Overall, the second scenario went over pretty well with the players, based on their comments afterwards, and they had a good time with this Yggdrasill scenario. The players are getting more comfortable with the game mechanics as they play the game, and are looking forward to the next adventure in the Norse world.

Over on the River of Heaven RPG Kickstarter, Newt Newton has posted a somewhat revised, sharper piece of cover art for the game. I figured I'd post it here so folks can have a look at that. (Comments and thoughts are also welcome.) 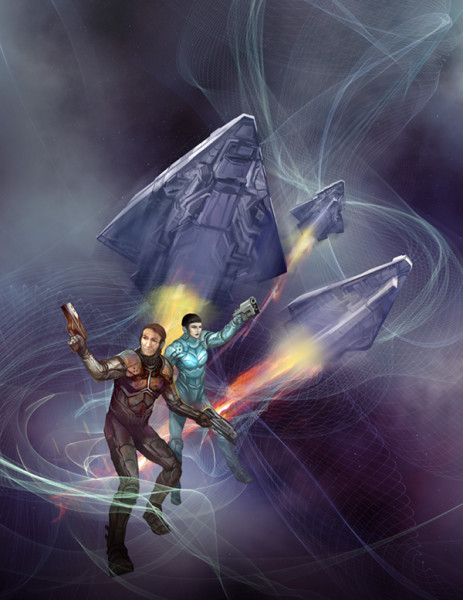 Here's the fifth session report on the Sunday afternoon Yggdrasill game campaign. This session dates back to December 8th, 2013. You can read about the previous session of the campaign in this journal entry. This post is somewhat long, so I've put it behind a cut so that folks who don't want to read any detailed rpg posts don't have to.

The Sunday afternoon players got back into the scenario of the Yggdrasill RPG that they were playing back when I stopped running right before HammerCon. The players got back into the game rather slowly, having to get the mindset of the Norse gaming world and the game mechanics once more, and so this session was, to be honest, a bit slow in feel and style, and somewhat along the lines of a game of catch-up.

spross or Tammy felt the game session was all that productive, I found that things did move forward somewhat. Sure, there were no fights or battles or skirmishes, but there was some good roleplaying, though SteveR is still having a lot of trouble coming to grips with his character's major plot as well as with who/what his character is.

Given my health today, I was honestly glad that I didn't have the characters engage in any combat situations, as I don't think my head could have processed a skirmish or larger fight all that well. I thought the game session went as well as could be expected, and had a pretty good time of it.

Here's the seventh session report on the Friday night Yggdrasill game campaign. This session dates back to December 13th, 2013. You can read about the previous session of the campaign in this journal entry. This post is somewhat long, so I've put it behind a cut so that folks who don't want to read any detailed rpg posts don't have to.

Last night, the Friday night gaming group continued on with the Yggdrasill game that they are playing in. This session marked the start of a brand new adventure for the group, one that I've done up based on one of the old Desolation RPG scenarios that I ran on them a while back. My Friday night players don't mind playing adventures that have been re-cycled from one game system to another, although the same cannot be said for the Sunday gaming group (well, at least one of the players in that group). As long as the scenarios fit the game system they're being used in.

The players had a good time with the game system once more, as the Yggdrasill game system is turning out to be one of their favourite sets of game mechanics, easy to learn and fun to play within and implement. Joanne's Dagna Styrsdottir and Nick's Ogir Haralfsson had a testing time, figuring out a few things and dealing with some of the magical elements of the game world. Kathy's Ingrid Horoldsdottir and and Tom's Vigfur Egilsson had their work cut out for them, both from the point of view of trying to protect Angela's Sigrun Evardsdottir and in their profession as hirdman and scout respectively. David mentioned that he felt the skald, Amund Torkelsson, was pretty useless, until they encountered a situation where he realised that his magic (Galdr) would save the day, and that's how things shaped up. I definitely need to remember to devote more time to his character, and have some sort of major plot or minor story arc come his way.

Overall, the players told me they had a good time with the game session, and are enjoying the spin on this adventure that I've given it. They're also enjoying the mythology of the Norse game world, finding it more challenging than the standard European stuff that is so prevalent in most fantasy rpgs. What strikes me most about the players and their characters is the relationships that have developed between the player characters, and some of the conflict that has come out of these relationships and the game situations they've found themselves in.

As for me, I'm enjoying running the game, as the simple mechanics are helping me given my current state of health and mental frame of mind. So... I'm rather looking forward to next week's game session. :)

Here's the eighth session report on the Friday night Yggdrasill game campaign. This session dates back to December 21st, 2013. You can read about the previous session of the campaign in this journal entry. This post is somewhat long, so I've put it behind a cut so that folks who don't want to read any detailed rpg posts don't have to.

Last night's game session was an interesting one, though time-shortened due to weather (i.e., snow, snow, snow), but the players were quite satisfied with the session as quite a bit happened as they continued on with their current Yggdrasill adventure. There was a bit of fighting, a bit of negotiation, and a bit of disagreement on the part of the player characters on how to handle some stuff, but overall the player characters did a good job with what they had, and the players continued to keep their characters interesting and focused on the task at hand.

We managed to get in about three hours of gaming, the players leaving my place around 10:45 pm last night, as it appeared the weather outside was getting nastier.

Looking forward to next week's game, the Snow Gods willing. :)

Here's the ninth session report on the Friday night Yggdrasill game campaign. This session dates back to December 27th, 2013. You can read about the previous session of the campaign in this journal entry. This post is somewhat long, so I've put it behind a cut so that folks who don't want to read any detailed rpg posts don't have to.

I continued to run the Yggdrasill game that I've currently got going, and the players had a good time with the session.

Everyone showed up by about a quarter past seven, so we got the game underway at that time. This particular session of the adventure had a bit of everything in it, some really heartfelt moments, plenty of combat, and was fraught with danger for the players and their characters. One of the combat sequences was the most complex and taxing (for me, anyway) that I've ever run in a game over the past ten years or so, but the players gave me a lot of help handling keeping track of some of the game numbers and the like, so that made things so much easier for me. There was also a good deal of player character interaction in the session, that highlighted some of the relationships that have developed among the characters, but there was some tension between the players' characters about some of the actions taken in the session.

This was the last gaming session for the Friday gaming group in 2013, and to be honest it was a satisfying game session and one that made for a fitting end to this year's gaming on Friday nights. I can't wait for the start of gaming in 2014! :)
Collapse