Another somewhat cold day in the Ottawa valley, though it can't be that cold as it snowed outside last night and I can see from the window there's a few flakes of the white stuff coming down.

Friday night was pretty good. As that was a gaming night, I'll be blogging about that later today and posting up the transcript of the game session as near as I can figure it out (with some help on the combat sequence events from the Friday night players).

I don't really need to do any grocery shopping today, so there's nothing on the day's agenda for me going out at all. I will take a walk outside, if possible, right after I finish this blog entry, as the fresh air will do me good and so will a bit of exercise. :)

After that, I plan to spend part of the day working on some gaming stuff, notably the Atlantis: The Second Age scenario(s) for CanGames 2014, and sorting out some more of the games that I want to sell this year at the convention.

Beyond that, I'm not thinking that far. :)

May the Goddess bless you with happiness, love, good health, good fortune, prosperity, and may a warm breeze always blow at your back.

Have a good one, mate, and hoist a wee dram for me in your honour today! :)

Last night's gaming session with the Friday night group went really well and was a lot of fun to boot.

The Friday night game continued on in the Yggdrasill RPG campaign that I've got going right now, finishing up another scenario in what turned out to be a somewhat longer session than usual.

The players showed up at my place around 7:10 pm last night, and we gamed until roughly 12:30 am with a 5-minute break for tea and stuff. The game session itself had the player characters continuing their quest to find the missing Astrid Infredsdottir in the Tornede forest, and having a terrible battle on their hands at the end to save her, with several player characters almost losing their lives in the process.

When the gaming session was done for the night, the players were in a bit of shock at how rough a time they'd had of it in the final battle with the creature (see the separate blog entry later on the whole business), but were also rather ecstatic that they had survived the fight with the creature. Kathy and Nick told me that this was the first time in Yggdrasill that they actually worried about their characters' lives, while David said that he really had the blood flowing during the fight, having to watch as those more combat-oriented than his character dealt with the creature. Lovely stuff!

Since the players finished the scenario that they were playing, I don't know what we'll be doing next Friday evening. The players are chomping at the bit to do Atlantis: The Second Age, but I'm loathe to run that again until the physical book is actually out. There was also talk of doing some Atomic Highway for several weeks, at least until Atlantis comes out, so there's also that possibility. Maybe a couple of one-shots of that game, but we'll see.

In the meantime, I'm just having a lot of fun running stuff at the moment! :)

Here is the twelfth session report on the Friday night Yggdrasill game campaign. This session was played last night, and is the most recent game session of the Friday group. You can read about the previous session of the campaign in this journal entry. This post is somewhat long, so I've put it behind a cut so that folks who don't want to read any detailed rpg posts don't have to.

I don't think there's a lot to add to this post given what I said in the previous journal entry on last night's game session. I will just add that I am quite proud of the job that the player characters did in last night's Yggdrasill game session, and that this was really the first time that the characters have truly faced death in the game system since I started running it. The adrenalin was definitely flowing last night. And that's good.

As I said, I don't know what next week's gaming session will bring, but I'm looking forward to it! :)

I've had many regrets over my years of playing and running roleplaying games.

One of the biggest regrets that I've had over the last few years was that I allowed myself to let go of the English version of the Agone roleplaying game. I sold most of the English stuff and some of the French stuff that I had at a CanGames several years ago, but the rest of the Agone stuff that I had was destroyed during the flood that I suffered in my basement a couple of years back.

I'd been meaning to find copies of the English products for the game - Agone RPG, The Agone GameMaster Pack, King of Spring, The Grimoire, Vol 1, and The Grey Papers - again, but kept putting it off and so forth. Well, no more...

They are mine again!!! HAHAHAHA!!!

As the photos below prove! (And yes, I am a shite photographer at times, but today's been a bad day for the headaches and the shakes. Tough.) 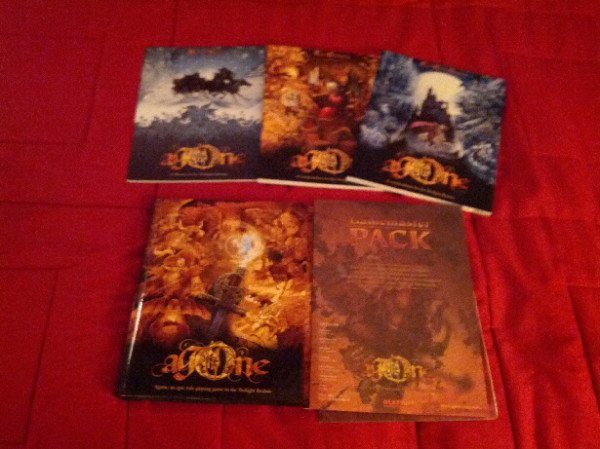 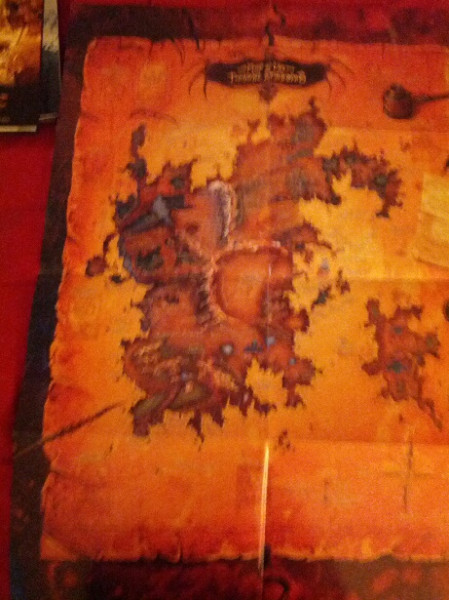 Had a pretty decent, if somewhat tiring afternoon today.

spross dropped by the house with some print-outs of stuff for me for gaming purposes, and then he helped me out with sorting out and purging the roleplaying games. As I plan to get rid of and sell a lot of stuff at CanGames 2014 this year.

I'll be posting all sorts of photos (some good, some really bad) in the near future in multiple posts of what I'm going to be selling off, but in the meantime, here's the list of the game lines that I'm not getting rid of (and that will hopefully go to my grave with me!). LOL!

and a few more that I'm blanking on right now, including most of the games that I've written for, edited, etc... Still, not as many games as I expected. Though it still comes out to five boxes of games. (And

spross, if you remember any that I forgot, please let me know. ;))

And just wait until you see the surprises in among the stuff that I'm going to sell! :)
Collapse