Woke up this morning to a crisp and sunny day, warmer than it's been, so that's good.

I actually slept quite well last night, though the evening was a bit miserable. My vision in my left eye started to go blurry by around 7:00 pm last night, and while I was a bit worried about it (given that it was likely my loose retina again), I decided to take it easy and relax for the evening, so that's what I did. I figure that the retina thingie got aggravated a bit by the bouncing ride to the hospital yesterday from the office and then on the ride home from the hospital.

In any event, this morning my vision is A-okay once more, but I'm thinking of going back to the eye doctor again. We'll see how things go the rest of the day today, though I've got things to do both on the work front and the gaming front.

Back to the morning work load and stuff. :(

With both the Friday night and Sunday afternoon gaming groups having wrapped up their latest Yggdrasill RPG scenarios, I spoke to the Friday night group about what we're going to play tomorrow night.

The consensus there is that the Friday nighters are waiting for the release of the Atlantis: The Second Age RPG rulebook in a dead tree edition, so they said they'd rather play a game to "fill in" the gap between Yggdrasill and Atlantis: The Second Age. Since I've been thinking about running the game for one-shots and the like for the last month or so, I raised the idea of playing Atomic Highway, and the players were pretty stoked about the game, other than the two players who had never played the game before as they weren't part of the Friday night group the last time I ran it.

So, what is Atomic Highway, you ask? 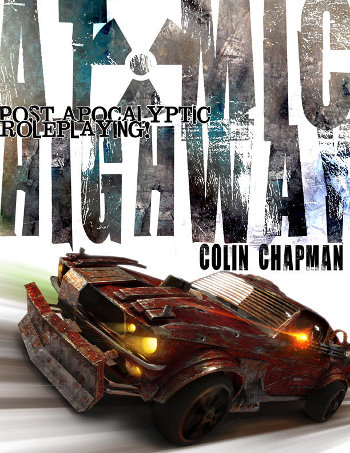 Atomic Highway is a roleplaying game of post-apocalyptic adventures using the cinematic style V6 Engine system, and emphasizing GM creation of the setting. Here's the blurb from the back of the book:

A new Dark Age has begun. The descendants of the apocalypse's survivors scavenge the remnants of the Before Times, struggling to build a new life amidst the ruins of the old. In a savage world where the strong ravage and exploit the weak, the survivors' settlements are oases, connected only by the convoys of armed and armored vehicles that run the gauntlet of raiders...and worse.

Though the threats of chemical and biological agents and radiation have all but faded, their taint lingers on in every mutant born to man and beast.

This is the world of Atomic Highway.

What's not to like, right? The best news is that the game is now available for free on DriveThruRPG!

In any event, I'll be running Atomic Highway tomorrow night on the Friday gaming group.

And I'll be whetting your appetite with a sample of character creation later today. :)

Looking forward to this game. :)

Fossil "Devil Frog" Beelzebufo was stranger than expected, but not quite the giant dino-chomper it was thought to be.

Fossil "Frog From Hell" Gets a New Look

Since I've been talking a lot lately about the Atomic Highway roleplaying game, I thought I would present an example of character creation for folks to check out. I've already done one of these up in another life (you can check out that character here), but figure there's no harm in another one. :)

Game: Atomic Highway (AH)
Publisher: Radioactive Ape Designs (via Cubicle 7, now free on DriveThruRPG
Degree of Familiarity: The game's been around for a while. I've run it a few times as one-shots and the like. So I guess I have a good degree of familiarity with the game. :)
Books Required: The Atomic Highway rulebook.

Please note that this is quite long, as I've gone into the game mechanics a bit in terms of character creation, and have provided background on the character and the choices I've made here.

And there you have it, another character that I've created in detail for the Atomic Highway roleplaying game. This character took me roughly 20 minutes to create; I suspect that while a newbie to the game might take twice or three times as long (sorting through choices, and potentially building a customized vehicle such as a car or motorcycle for their character), it can be done in less time than that by an experienced gamer. This may or may not include the character background and the like, depending on how detailed the player wants to get. If nothing else, I hope this encourages folks to take a look at the game system.

So roll on down that Atomic Highway!
Collapse