Woke up this morning, Saturday, feeling somewhat woozy and a bit headachy and stuffed up, but overall fine. Got out of the bed, and the ankle and leg immediately broke out in pain.

Breakfast is done, a simple meal of scrambled eggs and spinach, with a bit of cheese, two slices of toast, and some yogurt, washed down with decaf coffee.

Since the Friday night gaming group didn't play last night, due to the fact that I wanted the weekend off and because three of the players are still pretty ill with the flu that's going around, I had an easy night of it, and watched a bit of PVRed stuff as well as just doing a bit of non-gaming reading (Jasper Fforde's First Among Sequels) and got an early night's sleep on a Friday for a change, though I read while I was in bed a bit as well.

I plan to take it relatively easy today (well, as easy as I can), but I have to go out this afternoon. I need to do the photocopying of the player character sheets and the like for the two Atlantis: The Second Age scenarios that I'll be running at CanGames next weekend (eek!), and need to see if I can find a map tube as well.

Might watch some more PVR stuff this evening, but we'll see how that goes as the day wears on.

Just came back from being out for most of the afternoon.

spross came over this afternoon after taking care of some stuff downtown, and we went out and did some photocopying of stuff. He needed to photocopy stuff for the games he's running at CanGames this coming weekend, and I needed to print out the player character sheets for the Atlantis: The Second Age games that I'll be running at the convention (the ones for the Yggdrasill game are already printed out).

We then went into a card store, as both he and I needed to pick up some Mother's Day cards (yes, I know, I left it very late, but what can you do?). Once that was done, we went on an errand to find a mailing tube/poster tube/map tube/whatever you want to call it, but no one seemed to have them anywhere, and the one store that did have them were in the wrong size. I need the new tube for the Atlantis: The Second Age 24x36-inch map that came, as the tube on that one got damaged in the mailing system, and the map inside is somewhat damaged by the damage to the tube itself.

Anyway, from doing that shopping, we stopped at a Dairy Queen and had a couple of smoothies, which really helped with the dehydration and stuff, though the orange one that I had was a bit sour to my tastebuds.

We then went into Wal-Mart so

spross could pick up a few things, and then he and I headed back to my place.

By the time I walked in the house, I was feeling dead tired and exhausted, my left ankle and leg were hurting seriously bad, and I just wanted to get off my leg and rest. I had some cucumber with a bit of cheese, and a bottle of water, and am about to go and sit down for 10 minutes or so and hope my leg rests a bit before I go and make some supper for my mother and myself. (This being the Mother's Day weekend and all.)

As mentioned in the previous post, I finished off the photocopying of the character sheets for the players for the two Atlantis: The Second Age scenarios, "The Medallion of Ssthauga" and "The Curse of Maugr-Threnn", that I'll be running at this year's CanGames next weekend.

Here's the proof, as I provide a photo of the sheets for one Halicarios the Historian... 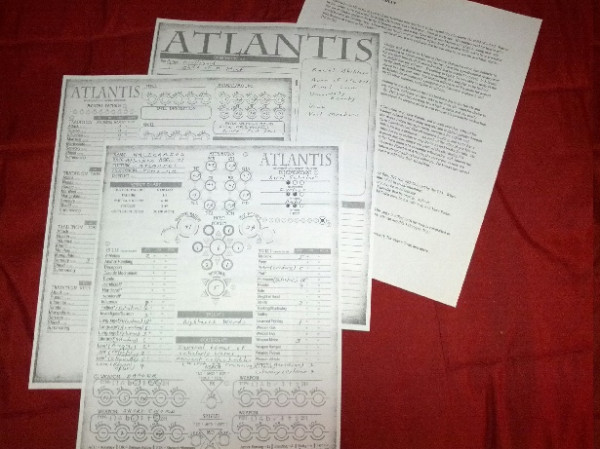 And now, I'm off to bed for the evening. :)
Collapse