It's Sunday morning on the Easter weekend, and I plan to have a pretty quiet day of it.

I woke up this morning feeling as "blah" as I've been feeling the last week or so. I managed to get a decent night's sleep last night. That said, I did go to bed somewhat later than planned as I played with the Friday night gaming group a night later than usual. Gaming went pretty well, a good session of River of Heaven and I'll blog about that game session later this morning, though I wasn't sure how long my voice would last due to whatever's going on in my chest and throat.

That said, today is a planned quiet day, if I can manage that. Gaming with the Sunday players is not on for the afternoon, though

spross is supposed to drop by today to work on his land-based campaign character for the Atlantis: The Second Age game. Not sure what will happen with that, since I don't know what he's planning to do in terms of possibly changing characters or revising the one he's got.

Meanwhile, my throat is hurting somewhat, so a hot cup of tea is called for.

As mentioned yesterday, the Friday night did not play their usually scheduled game on Friday night due to circumstances, but all agreed that they wanted to play this weekend, and managed to fit the game session into their Saturday schedule. So last night (Saturday), the Friday night gamers continued their play of the River of Heaven RPG campaign they've got going. Here is the write-up on that game session. You can read about the previous game session in this journal entry. Since this post is quite long, I've put it behind a cut for those who don't want to read about the roleplaying game campaigns that I'm running.

Last night's game session of River of Heaven marked the start of a brand new adventure for the players and their characters. I thought things went well, the characters interacting quite nicely together and some personality aspects of the characters coming to the fore, and then set up the start of the adventure proper. The Blue Daphne's AI, Fritz, seems to be a hit with the players, something I'm pleased about, though I'm still feeling out the game system in terms of how shipboard AIs work and interact with the characters aboard ship. The players had a good time of things, though Kathy and Angela worried several times about whether my voice was going to hold out for the evening. Fortunately it did, but I'm still a bit hoarse this morning.

Overall, I thought the game session went well, and I'm looking forward to running the game next week, health and weather problems hopefully not hindering things. What I've got in store for the player characters-- Oh, not telling! <g>

Since it's Easter, and there's all sorts of thoughts about eggs, thought I'd toss this one out (written by Paige Madison) for today... Dinosaur eggs, and how scientists tell them apart and classify them.

A nest of prosauropod dinosaur eggs for Easter. 190 million years old, from the Elliot Formation, South Africa. (From the folks at the Royal Ontario Museum.) 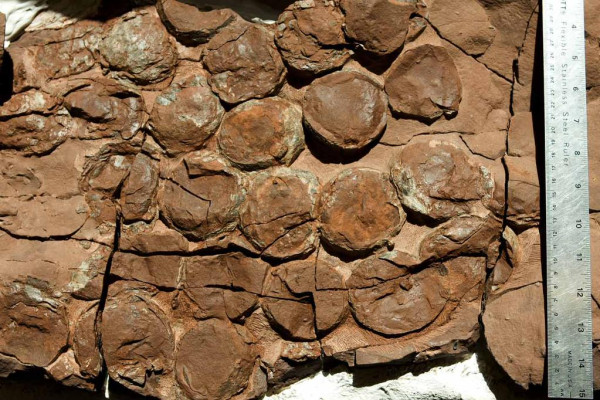 Back in 2012, Brian Switek posted up this lovely one for Easter, and I thought it was appropriate to link to it today.

Easter eggs are dinosaur eggs. Here's a guide to who laid the candy in question.