It's Monday morning, the first Monday of July.

I was supposed to have today off after putting in the work hours last week, but that all blew up in my face yesterday when I got a call from work that things had gone to heck in a handbasket. Apparently the back-ups of the translation project my team and I have been working on for the last month weren't made, and a hardware glitch yesterday wiped out some 70% of the work we'd done on it. So today is a damage control day, among other things.

And I really wanted and needed another day off. Dammit!

As per the usual routine, I spent yesterday afternoon gaming with the Sunday group.

The players continued on with the Atlantis: The Second Age game campaign that they're playing, and started a brand new adventure. Yesterday was also an interesting game session because I had a new player join the gaming table. I'm hoping that he likes the game and the group enough to stick with the group, but we'll see. I thought the gaming session went well enough, but you readers will have to be the judge of that when I transcribe what notes I did take and post them up here.

That said, yesterday was also the day that my birthday cake got eaten. I didn't have a very large cake this year, just a 6-inch blackforest cake that made for 6 servings. One of those has been put away for my mother, and one has been put away for Kathy and Ellie to split (possibly this evening). It was a lovely and delicious cake, but I'm glad I only do this once per year. Because I don't eat a lot of sugar during the year, I find the cake to be super sweet. But that's a good thing, right? :)

Anyway, here's a couple of photos of the cake... 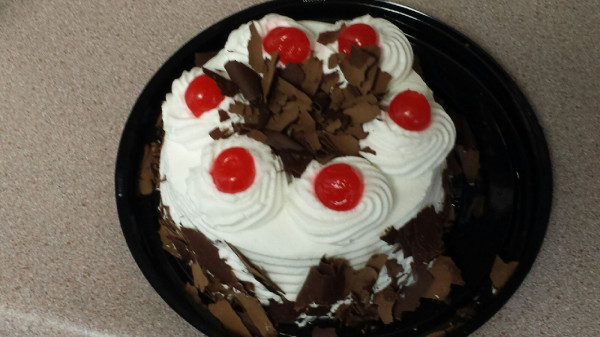 Overhead view of the cake 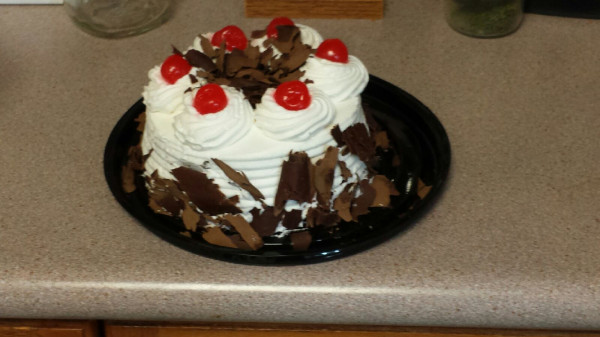 Side view of the cake 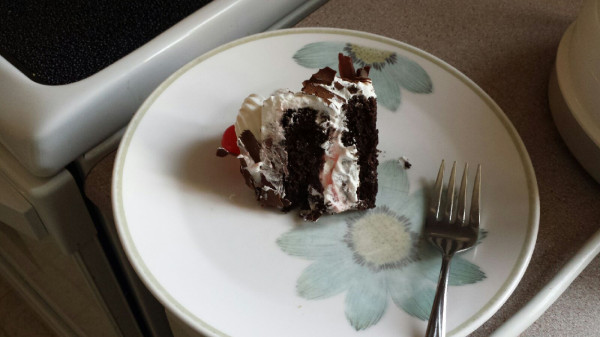 My slice of heaven (err...the cake)

On Friday night (July 3rd), the players from the Friday night group continued their campaign and played another session of the Atlantis: The Second Age sword & sorcery game. You can read about the previous game session in this journal entry. This post is extremely long, so I've put it behind a cut so that folks who don't want to read any detailed rpg posts don't have to.

In a lot of ways, this was one of my favourite all-time sessions that I've run of the Atlantis: The Second Age RPG in all its forms. While the write-up of this game session is relatively short, a lot was happening in this game session, and there was a good mix of roleplaying and good old-fashioned sword & sorcery style combat. When the session was over, the players were all breathless from the thrill and the danger of the combat just passed, and everyone really praised Kathy for her realisation about the undead priest and stuff.

A very satisfying session of Atlantis: The Second Age in so many different ways, to be honest, and I'm looking forward to the continuation of this adventure as the player and their characters have barely scratched the surface. Next Friday can't come soon enough!

Yesterday, the Sunday gaming group players continued their play in the Atlantis: The Second Age campaign, continuing on from where they left off (though at the start of a brand new adventure, and the introduction of a brand new player character into the mix). Here are the game session notes. You can read about the previous game session in this journal entry. This post may be somewhat long, so I've put it behind a cut so that folks who don't want to read any detailed rpg posts don't have to.

Yesterday's session of Atlantis: The Second Age was one of the more interesting ones I've had in a while with the Sunday players, as it introduced a new player to the group, Dan (who I hope will be sticking around with the group for a long time to come). The session had a lot of stuff going on in it, as the introduction of Dan's character was topmost in my mind, but the whole situation in which the player Heroes found themselves worked pretty well, I thought. The session was marred by a 15-minute sequence of

spross figuring out what he wanted to do mechanically in order to avoid being struck by a nasty dark bolt of arcane energy, and it looked to me like Dan was seriously bored at that point (and I actually thought we might have lost him). I worried needlessly on that score, as he told me that he'd had a good afternoon, had a lot of fun, and liked the game system (and hopefully my GMing of it!), so I was pretty relieved about that. The set-up for this session worked well, and there are a few surprises in store for the players and their characters before this adventure is a wrap.

Overall, it was pretty successful game session of Atlantis: The Second Age, but I do have to admit that I was pretty tired when we wrapped up the session just after 6:00 pm. (There was an overly long break for cake and tea (see this blog post for more about the cake.) In any event, I'm quite looking forward to continuing this new scenario next week.
Collapse