Had a lovely session of the DragonQuest game system with the Friday night group last night. So much so that they expressed an interest in playing another "full, proper" game session this evening.

Looking forward to it. :)

But should be an interesting night's sleep, given that we turn the clocks ahead tonight by an hour. I will be truly sleep deprived on Sunday, I guess. :)

Yesterday evening, Friday, the Friday night gamers came out for the weekly gaming session all hyped up and ready to go. We've started off on the DragonQuest RPG game campaign. You can check out this post to read about the player characters that have been created for the game. Since there's not a lot of stuff here about the player characters and the game session, I've not put this post behind a cut.

Given that the majority of the players (with the exception of Kathy) had never played DragonQuest before, they decided that they wanted to get a good session in about the game's combat system. So I started with the usual. The players begin with an introduction to the world of the DragonQuest Roleplaying Game. The players learn some of the basic mechanics of the game, get a bit of a lesson on the DragonQuest Glossary and some terms used in the game, and partake in quite a few samples of combat using the Tactical Display that teaches them the basic (combat) mechanics of the traditional, old school fantasy roleplaying game. And how deadly the combat system is.

The Friday night session of the start of the new DragonQuest RPG campaign began well enough, and saw the players enjoy themselves in a rather visceral manner all evening. The five players played out quite a few (something like 10) sequences of combat, more than I anticipated, with their characters, and had a good time of it, maiming and mutilating each other quite eagerly. I haven't seen this many Grievous Injuries rolled in a long time! :) It was a good learning tool for the players, and they seem to be pretty ready for the start of the campaign now.

Overall, a good gaming session. I'm looking forward to the next session of the game as well. :)

Just starting to get to work creating a player character NPC for the Sunday gaming group of the DragonQuest campaign. 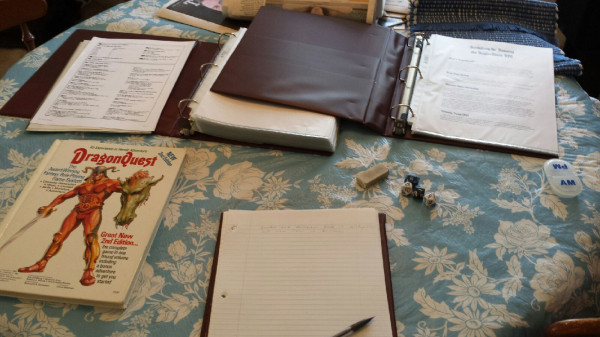 And the player character NPC for the Sunday group DragonQuest RPG campaign is done.

Tanar Ranvek is a hunter and ranger.