It's the 1st of September. A new month.

I have to say that I'm quite relieved for the most part to see the end of August. As most folks know, the first seven months of 2016 weren't exactly great for me, but August was a month where most of it was spent in pain. And I still have few answers to the problem, although some of the medication I'm on seems to be helping a bit.

I have just a couple of medical appointments for this month, unless something unexpected comes up ::knock on wood:: and I have to say that I'm feeling pretty decent this morning, so hope that continues for the month.

On the roleplaying game front, with character creation for all three groups for the Polaris RPG almost complete, I'm looking forward to actually running the game, and getting into the mysteries of the underwater world. It's a fascinating game world, and has lots of promise and potential.

But for now, back to the job stuff.

A new fossil suggests life during the late Cretaceous was not quite what we thought.

Last night, the Wednesday gaming group met up and created their player characters for the Polaris RPG. All four players were looking forward to creating their characters, notably Donna, who had peered over my shoulder most of the last two weeks at work while I was going over the game books. :) 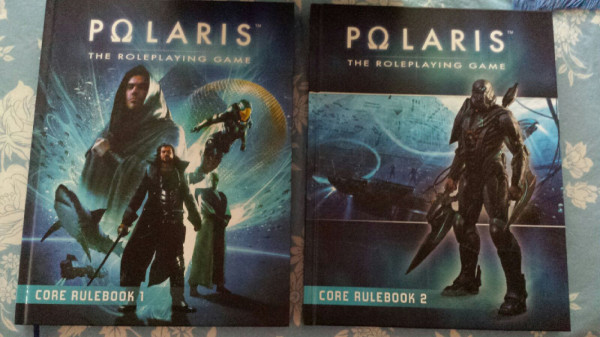 The Wednesday night gamers arrived around 7:00 pm or so. After we spent about 10 minutes going over the week's details, and setting things up for gaming, everyone gathered around the gaming table/area, and we got down to it. As I had with the Friday night and Sunday afternoon gamers, I started off by talking to the players about the game world, giving them an overview of everywhere and some of the important elements of the game, and explained to them the basic game mechanics. After answering some questions the players had (more than I expected, and definitely more than what was asked by the two other groups), we got down to the character generation process. This initial step of character creation took a little over an hour, and was time well spent, though I was feeling a bit hoarse. (Nothing that some hot tea and a couple of Ricola lozenges didn't help with.)

I gave the players a quick overview of the character creation process, and they weren't the least bit worried about the math, though Crystal took out a calculator "just in case".

*****
Donna - Donna looked at the list, and decided she wanted to play something different, and she certainly is. Donna's creating Stefania Marigold Kormer, a former Navigator aboard the Mediterranean Union ship Ariston, whose vessel was destroyed and and she was stranded at an abandoned station. She's now made her way to Equinox, and is looking for a way home. She thinks.

DavidW - He had his doubts about the game, but after we went through the basics, he developed an eagerness to get involved in it. DavidW's creating Kevin Howagan, a former Mercenary in Hathaway's Marauders, who's been exiled from the gang for saving the life of Stefania (he did it for nothing!!). He's not sure how he feels about the former navigator, but something's there...

Kendall - Kendall and Donna came up with an interesting connection for their characters. Kendall's going to play Hayma Locke, a Submariner who served aboard the Med U vessel Ariston, and who was a "close friend" of Stefania's (did she have something on her?). She somehow survived the attack on the Ariston as well, but is she what she seems to be?

Crystal - Crystal decided that they needed some balance in terms of DavidW's character, and so she's going to be playing Arissa the Black, a pirate and smuggler who may or may not know what happened to the Ariston and has a past with Kevin. There's some other stuff going on there, too, so it should be interesting to see how her character shakes out.
*****

As you can see, even though the players aren't finished creating their characters, the four characters involved are a neat mix of types, with several connecting themes and potential conflicts connecting them all. If this works out half as well as it's already sounding, this should be a fascinating game campaign with lots of inter-player character conflict. I can't wait!

The players finished working on the characters for the night around 10:05 pm, so they got in about three hours or so (including about an hour of learning about the game world and asking all manner of questions), so they still have a ways to go with the process. I'm looking forward to that in two weeks, for sure.

If anyone has any questions about the character creation process for the Polaris RPG, please don't hesitate to ask. :)

Since I'm getting ready to run the Polaris RPG that has just come out commercially from the folks at Black Book Editions on my three gaming groups, I thought I would post up here a detailed example of character creation for the Polaris Roleplaying Game.

Whew! Well, that was quite long and definitely detailed, and shows folks how character creation works for the Polaris RPG (though it's missing some of the fine steps and explanations, that I just didn't have the energy to type in!).

This was the first character for the game that I created, and to be honest, in the original version of this character I fouled up some of the mechanics, and everything fell into place after talking with the lead writer of the game, Philippe Tessier. That said, the big mistake I made with Marco Callardin was to do him as a multi-Profession (Militiaman and Bartender) character. Having to roll under those Global Skill Levels on a D20, albeit with some modifiers, isn't going to be easy. Still, I rather like him as characters go.

The Polaris RPG character generation system and game world does give for some interesting characters, and my three gaming groups and the players there are proving this in spades. Character generation in Polaris can definitely take a while, as there are some choices that need to be made in character creation that require information about the game world to be given to the player. If one has an idea of what one wants in the player character, the process can definitely take less time, but to be honest, this is a game system that is extremely fun to work with and gives an incredibly wide variation on characters.