Peter Jurasik is an American actor who is known for his role as Sid the Snitch on the 1980s series Hill Street Blues and its short-lived spinoff Beverly Hills Buntz, but is best known and loved for his role as Londo Mollari in the science fiction hit series, Babylon 5 (or this site).

The actor, who turns 67 today, is one of my favourite actors for his distinctive looks (in whatever role he plays) and his sheer character-driven performances. While Peter Jurasik has a good resumé in the field, his performance as Londo Mollari on Babylon 5 was a joy to watch, and I have very pronounced, strong memories of his role in the series.

And he still *does* look stunning in purple! :)

I was going to post this as a retroactive post, but have decided not to. Anyway, as mentioned on Friday (April 21st) in this post, 3/5s of the Friday night group was heading to the Ottawa Senators-Boston Bruins NHL playoff game (which Ottawa lost, by the way), but both Kathy and Ellie wanted to play games. I had told them there was the possibility that we might do some characters up for the new Free League game, Tales From the Loop, and they were pretty excited about this (especially Ellie).

As it turned out my package of the Kickstarter backed materials, that was supposed to arrive by "end of business day" on Friday didn't. I figured that we'd do some board games instead, but... 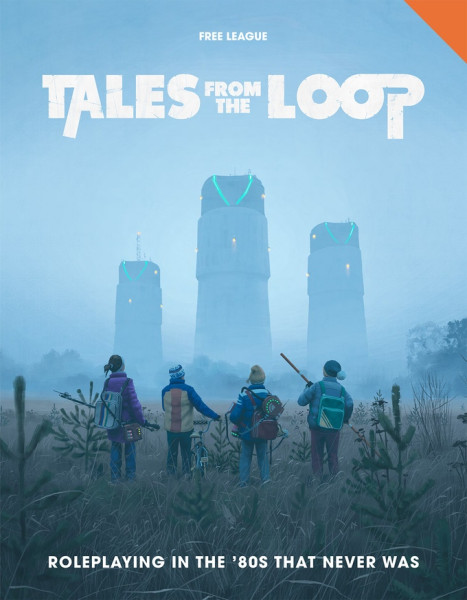 Once Kathy and Ellie showed up at my place around 7:00 pm or so last night, we chatted for around 10 minutes or so and caught up on the weekend. Afterwards, I explained that the Tales From the Loop game material hadn't shown up, and that we would be board gaming that night. However, Ellie said that she knew I had the PDFs of the game and all, and begged me to have her and Kathy create characters. And when your goddaughter pleads with you like that, what can you say? So we sat down and started creating player characters. I started off the night by giving the players a very brief overview of the game world of Tales From the Loop. The game is based on artist Simon Stalenhag's paintings of Swedish 1980s suburbia, populated by fantastic machines and strange beasts. Players play teenagers solving mysteries connected to the Loop (ask me about what it is in the Comments, please!), and the game uses a simpler set of rules based on those found in the Mutant: Year Zero game. I started by going over the basics of the world of the Loop, and Kathy was very intrigued by the concepts found therein. We talked about the basic rules of the mechanics, and then got into a couple of the sub-systems they were intrigued with. Since they were familiar with the game mechanics of Coriolis - The Third Horizon>, we discussed the basics of character creation, I answered a few questions about that, and then we got down to it.

The players decided they wanted to have their game set in the Swedish setting, and I was cool with that. The two player characters that Kathy and Ellie created are both interesting, and will make for a good variety and some sub-plot material as well.

*****
KathyB - She wasn't sure what she wanted, but Kathy settled on Sara Stahlberg, one of the popular kids at school who has an interest in ornithology and wants to find a cute guy for herself (as she's still never been kissed).

Ellie - She, on the other hand, new exactly what she wanted. Ellie created Linnea Sundstrom, a troublemaker with a knack for skateboarding and an alcoholic father.
*****

Character generation took less than an hour and a half, even with going over the game world stuff and mechanics, and both Kathy and Ellie wanted to *play* the game somewhat given that we still had a good 2-1/2 hours of time left for the session. So I started a scenario...

The session of character creation and a short scenario of the Tales From the Loop went pretty well, I thought, given that I was running it from the PDF of the game on the laptop and that I put together the basic scenario that I ran (see above) in about 15 minutes or so while Kathy and Ellie were just putting their character game stats on character sheets. Both players told me they really enjoyed themselves (though Kathy did mention she had to remember what it was like to be a tween/teenager!), and they loved the sheer simplicity of the game mechanics, even easier than those in Coriolis as Kathy said. They were curious about where the antagonists in this one came from, but I wasn't about to give away that secret. :) Ellie mentioned that she was suspicious about Miss Malmstern, but she couldn't put her finger on why.

So, a very enjoyable Friday night impromptu game session of the Tales From the Loop RPG, and I'm looking forward to getting a chance to run this again. Especially now that I've received my actual books and maps from the KS. Much easier than having to read material off the computer to run the game. :)
Collapse