My own dad died when I was pretty young (around 13 or so), so I can't really celebrate today, of course.

However, I want to wish everyone a Happy Father's Day, and to take the time to be with your father today if possible, and to at least talk to your dad today by phone if you can't be in the same house with your dad. Treasure the time and the moments that you have with your father, because for some of us, well...the memories are all that we have left.

My best wishes to all the Fathers out there.

Now be good to your dad today. That is all.

Haven't said that in a while.

Getting ready to game with the Sunday group. I've got four options in mind for gaming this afternoon, and while I know what I'd like the players to decide to do, I'm not sure which option they'll choose. So we'll see which way things shape up.

I'm just starting to make lunch here at Casa Kahane, and am rather looking forward to these hot dogs in buns. Better get on with it.

The Sunday gamers have left for the day, actually having departed around 4:30 pm, though

spross stuck around for a bit afterwards as I showed him what Torg: Eternity's basic game mechanics are like (more on that in a bit).

Once the players arrived around 12:45 pm, we chatted for a bit, and then I gave the players the options that I had in mind for today's gaming (see the previous post): 1) Continue the campaign of the Coriolis - The Third Horizon RPG; 2) Start of the renewed SkyRealms of Jorune RPG with some character generation; 3) Play a board game of some sort; and 4) Play the Torg: Eternity Free RPG Day little adventure thingie.

They vetoed 1) because they felt that...well, never mind what they felt about the game after the hiatus they've had. They vetoed 2) for the moment because they were concerned with my voice. They vetoed 4) because Tammy felt that Torg without the Drama Deck just wasn't Torg, so she'd wait for the game in October or so (assuming everything works out with the Kickstarter. So in the end, it was decided to play a board game. The two players settled on Tales of the Arabian Nights, so that is what we played.

To be honest, I wasn't feeling it for most of the afternoon and while I guess the game went all right (well, at least for Tammy it did, as well as for SteveR), I was somewhat...bored...with it. Absolutely nothing was happening for me, playing Ali Baba, other than getting Scorned and then being Enslaved towards the end of the game. Here's a photo, not a great one, that I took of the game board and the surrounding area at one point late in the game. 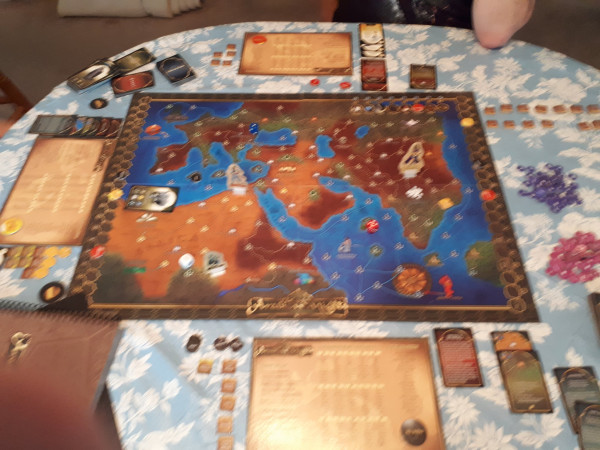 We wrapped up the game around 4:30 pm, and it was clear that SteveR was the winner, based on the fact that he'd completed 2 Quests to Tammy's 1 (and I hadn't even finished my first one). After SteveR helped me pack up the game, I grabbed the Torg: Eternity Free RPG Day material, and for 15 minutes he went through a couple of encounters for the game using the Celebrity player character. He rather enjoyed it, and I think he regretted not playing the Torg: Eternity game this afternoon.

Once SteveR took off, I collapsed on the couch and had a cup of hot tea and half a bagel with vegetables for snack.
Collapse