One of my good friends, Tammy Powers, is celebrating her birthday today!

Tammy doesn't have a blog here, but I know that she reads my blog from time to time, so I hope that you see this entry, m'dear. :)

Hope you have a terrific day today, and that you celebrate your birthday with lots of flair. May you have good health, happiness, prosperity, and love over the coming year, and may there always be a warm breeze at your back!

Getting ready for Sunday afternoon gaming.

I'm not sure whether I'm running a roleplaying game (the only one I've got nothing ready for haha is Torg: Eternity, so I'd be running "On a Wing and a Prayer" if that's what we do) but I'm not sure what SteveR and Tammy will want to do.

In the meantime, I'm running late so I need to get upstairs and make some lunch. Vuhr (sp?) salad I guess, with a couple of slice of bread.

(Oh, and there will be black forest cake this afternoon, as it's my birthday tomorrow. And I can't eat the whole cake myself, much as I want to these days.)

Gaming is done for the day. Thank Goddess.

I finished lunch a bit late, but that was all right. I'd eaten a slightly late breakfast, and then I had the misfortune of breaking two glasses in the kitchen. Couldn't hold the two glasses in my hands. (Part of the shoulder issues, which are getting worse.)

When Tammy and SteveR showed up, we got ready for gaming and discussed what we were going to do. Tammy decided that she wanted to give me the Sunday off from gaming (since tomorrow is my birthday), so SteveR agreed with her that we'd do a board game, and I didn't run Torg: Eternity. When it came down to it, we played a game of The Princes of Machu Picchu for the afternoon.

About 2 o'clock or so, the accident occurred. Tammy had her tall glass of water on the gaming table (which I've repeatedly told her not to do over the years), and she accidentally dumped a third of the glass on the table, soaking part of the game and several of the counters, as well as getting SteveR pretty wet and part of the living room carpet under the table. Several of the counters and a large summary tile got soaked, and are pretty useless for playing the game now, as they haven't dried out completely. And the large tile is...squishy and bendy. The other counters are starting to peel apart. Anyway, I was pretty annoyed as you can imagine, but didn't comment on it (though my face showed my feelings, I guess), and we re-started the game and had a pretty good afternoon of it. 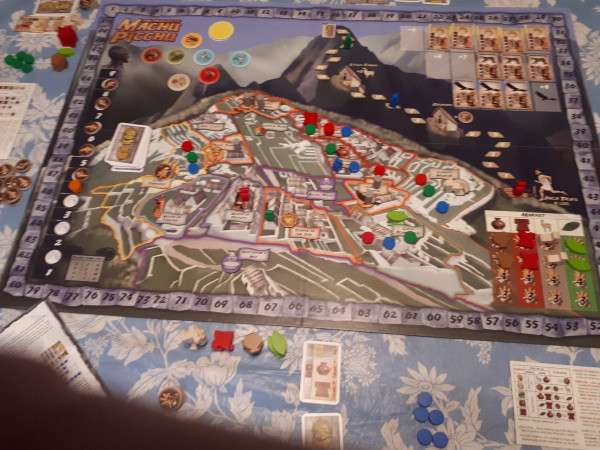 I didn't play very well, distracted by what had happened and the shoulder pain that I was in despite trying not to move around too much. Didn't manage to get myself a High Priest until late in the game, though I did respectably when the final Victory Points were counted out.

The Princes of Machu Picchu is a game that I really like, though I hadn't played the game in some time. Overall, a decent afternoon of board gaming marred by a few bad things and silly things.

As is my standard usage of my blog space at or near the beginning of the month, I present the listing of my June, 2017 reads.

All Our Wrong Todays by Elan Mastai

River of Teeth by Sarah Gailey

The Stars Are Legion by Kameron Hurley

Creating Life: The Art of World Building 1 by Randy Ellefson

Sword and Verse by Kathy MacMillan


And those were my reads in the month of June. Given everything that was going on in June (primarily health-wise), I'm a little surprised at the sheer amount of stuff that I read in the month. More surprising than anything else, I didn't read any roleplaying games or rpg supplements at all, other than the stuff I was editing (and that doesn't count). The books I enjoyed the most were:

Broadchurch: The Official Novel by Erin Kelly - This book is the official novel of the 1st series of the Broadchurch tv series, and is well-written and well-told. What surprised me about this was some of the background scenes and "in the head of the character" scenes that shed a lot of light on some of the goings on in. A really nice book, with relatively short chapters. Entertaining. And worth the read if you're a Broadchurch fan.

Echo by Jack McDevitt - The fifth book in the Alex Benedict series by the author, this tale about the antiquities dealer and his assistant/point-of-view character is somewhat darker than the previous works. When Alex is called by a local woman to pick up a tablet she's had in front of her house for years, the mystery begins as Alex believes it has unknown, alien writing. However, when the item is taken before Alex's people can get to it, the real story begins. Who took it? Why did they take it? Does it contain alien writing? If so, whose? All of these questions are answered by the end of the novel quite satisfyingly, but the book causes both Alex and Chase Kolpath to question their business and several moral issues surrounding the events of the novel. Highly enjoyable book in the series, and I recommend these books to everyone.

Sword and Verse by Kathy MacMillan - This YA novel is one that shows that one should never underestimate the power of language and the importance of the written word. This first novel is the story of a brave girl named Raisa, a descendant of the Learned Ones, and the recollection of Sotia, Goddess of Wisdom, who was wrongfully imprisoned by her brethren who feared her steadfastness to always do the right thing. Without going into the plot, I will say that this novel has a lot of things going for it, from the very clean writing to the fact that the author's protagonist, Raisa, doesn't talk down too much to the reader. While a few of the relationships between characters felt a little forced, Raisa's romance with Prince Mati doesn't, and the bond that forms between them carries much of the novel. Coupled with the rebellion in the Kingdom that creates most of the conflict in this novel, and some of the secrets revealed about various characters, this novel was highly enjoyable. I adored the unique amount of research and the depth of exploration in verbal and written language, and the story/history of the Goddess Sotia at the beginning of every chapter. This is definitely a "must read" book in my opinion, and was one of the highlights of the year so far.

These were the highlight book reads of June for me, though I did enjoy the other books that I read this past month as well.