The Friday night gaming group decided that they wanted to try out the new, forthcoming (in English) Ambrosia fantasy RPG. Since I have the Quickstarter document for the game, the players agreed to play in the scenario included with it.

You can read my original thoughts on the Ambrosia Quickstart product by following the link to my previous post on the subject. 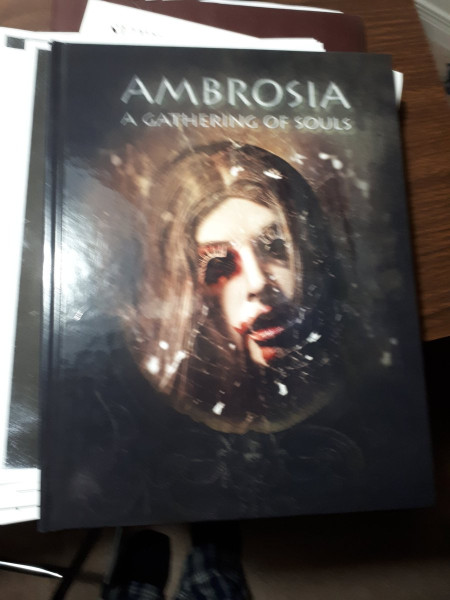 The players arrived around 7:00 pm last night, but I was surprised when Kathy arrived and told me that Ellie had begged off roleplaying for the night, since she wanted to spend some time with friends. I was a bit sad (she's obviously growing up a bit, and may not want to roleplay much longer), but was somewhat content. After chatting for a few minutes, we got down to the nuts and bolts of the Ambrosia RPG. I went over the basics of the game world of Ambrosia that we know through the Quickstart book, and the players were quite intrigued by the world. Kathy commented that it seemed rather different than the "standard" fantasy rpgs, but that's another matter. I then went over the basic mechanics of the Ambrosia RPG, and the players struggled a bit with these, because of some of the simplicity of the game mechanics of RPGs that I've been running of late. The players got the gist of the rules, but felt they'd be better off seeing them in action (as in, play). The four players then chose their characters from the mix provided (details of which I'm not going to go into here).

I'm not going to go into details about the scenario or the game play last night. "A Gathering of Souls" is one of the most challenging introductory scenarios for an rpg that I've encountered in a long time. What starts off as a group of characters sitting around a campfire in a forest during a bad storm turns into something completely different that will raise moral, cultural, and ethical concerns that will change the player characters' lives forever. Suffice to say, the players *loved* the scenario, and were somewhat shaken by the end of the scenario and the choices they had to make. Where they struggled somewhat was with the combat system, specifically how combat functioned (at least at first) and how damage was taken. These eventually were worked out in their heads, as practice made more perfect, but the characters discovered the hard way that combat can be lethal in Ambrosia. It's a truly mediaeval society, and combat hurts and can kill easily. It's to be avoided if possible, but the players learned the hard way (not by dying but being seriously wounded - one of the player characters lost their right arm!).

Overall, I had a good time running the Quickstart scenario for the Ambrosia RPG, and the players are definitely intrigued by this game and have told me that when the game rulebook comes out, they'll want to play the game.