Had a pretty good afternoon of gaming on Sunday afternoon, despite the absolute pain in my shoulder.

SteveR showed up around the usual time, and after a bit of chat, we got down to some board gaming for the afternoon. We had planned to play a game of The Princes of Machu Picchu for the afternoon, a fun game that has some cooperation mixed in with some competitive elements, and had a good time of it.

We started off the afternoon by taking all the components of the game out of the box, and counting everything up and making sure that they were all there. We were able to note the condition of the pieces that had gotten wet last weekend when Tammy dumped some water on the game board and pieces (see this LJ entry), and sure enohgh, other than the board itself, all the pieces that got wet are splitting. (I think I've managed to order some replacement copies of those pieces, but am still waiting to hear on this matter.) Once we had taken care of that, we set up the board for a three-player game, and this is what the game board looked like. 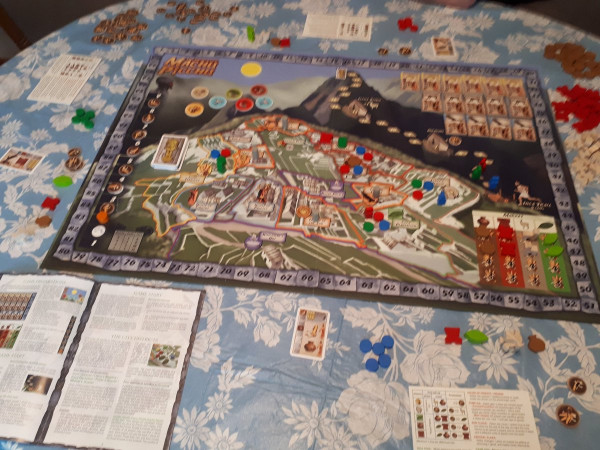 The Princes of Machu Picchu is a game that's lots of fun, and has a lot of different aspects to it the players have to juggle as the game progresses. The Cloth good can be very important in the game, but the Llamas are just as important in their own way. We played for just under three hours, and managed to avoid the win by the Spanish, instead winning the game with the claiming of all 15 Priests and Virgins. Then it was just a matter of totalling up the Victory Points and seeing who won. 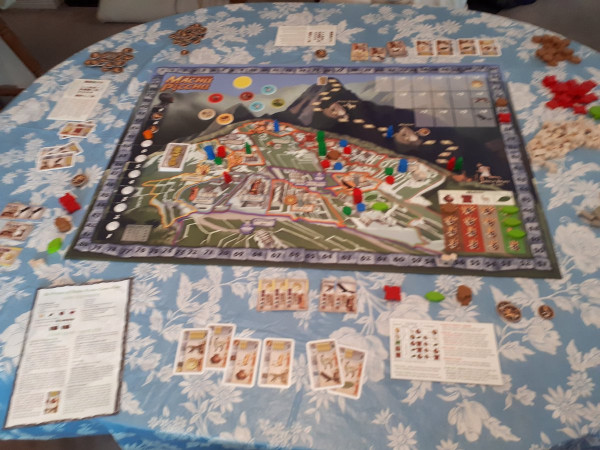 The game play was interesting, as it took a lot more goods (3 Cloth, a Pottery, and a Cocoa) to claim a Virgin as opposed to the Puma or Condor Priests. Since one can only move one area on the map at a time, unless one is willing to pay a Llama, and since Llamas are also used to sacrifice at Temples in order to advance on the Incatrail (and thus gain new Sacrifice cards that are used to determine Victory Points (unless the Spanish win, of course)), there is a premium on certain goods. Corn, the monetary unit for the game, also has its purpose, but so do Pottery and Cocoa goods. One of the things that the game teaches is resource management, since one only has so many Incas in order to produce goods in various production areas. I won the game, beating Steve by the fact that I had lots of Corn producers and snagged several Virgins early on for the win.

Overall, a fun afternoon of gaming with The Princes of Machu Picchu, a board game that has good replayability, and also has elements of cooperation that I really like. Looking forward to playing it again in future.
Collapse