Spent a relatively good afternoon doing some gaming in relation to the Torg Eternity RPG (yes, there's no colon between the two words as I've been typing it all this time).

SteveR told me that he would come over on Sunday to just "do stuff" (and likely get away from his folks and all), but I didn't really have a plan about what I wanted to do for the afternoon. He arrived at my place, and talked about seeing a movie, but I compromised and said that I'd like to do a quick playtest of a basic scenario idea I've got for an adventure for the Torg Eternity game. He was agreeable to that, so that's what we did. 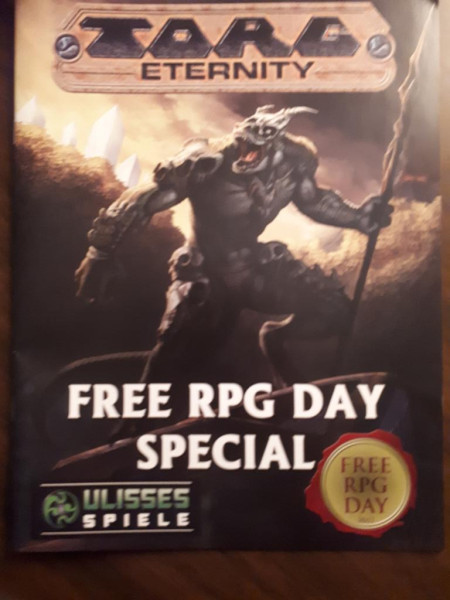 Adventures for the Torg Eternity game (and the previous TORG: The Possibility Wars) are divided down into Acts, and then Scenes (but scenes can have other stuff contained within them, and no, I'm not going into this subject here; maybe another blog entry some time). The adventure in question is on Day 1 of the invasion by the various High Lords, and is set at...a zoo. :) I've got the basic Act structure and the Scene breakdown for the scenario, but needed to fine tune things a bit.

Anyway, SteveR played one of the characters he'd created with me the week before, and I took the adventure through its paces, making notes here and there about changes that need to be made. Suffice it to say that SteveR had a lot of fun with it, but the Act Two material will need to be somewhat altered from what I've got, and there are some minor changes that need to be incorporated into several of the Scenes. The one element that I couldn't really take into account for the scenario were the Drama, Destiny, and Cosm cards, since I don't have the Decks as of yet. (I do have the cards in PDF, so have some familiarity with them, and was able to make some notes about using several of the cards in different circumstances and the impact the cards may have on some of the Scenes.)

Overall, it was a really good afternoon of working on some of the kinks in the Torg Eternity scenario that I'm working on. I need to do some re-writing and restructuring of the Act One material first, and then see how the Act Two material shakes out. SteveR seemed to enjoy himself, and I really am finding that I've missed running the Torg system in any shape or form. Can't wait for the new version of the game to come out!

Hail, hail, my copy of Michael Scott Rohan's The Winter of the World RPG book has finally arrived! :) 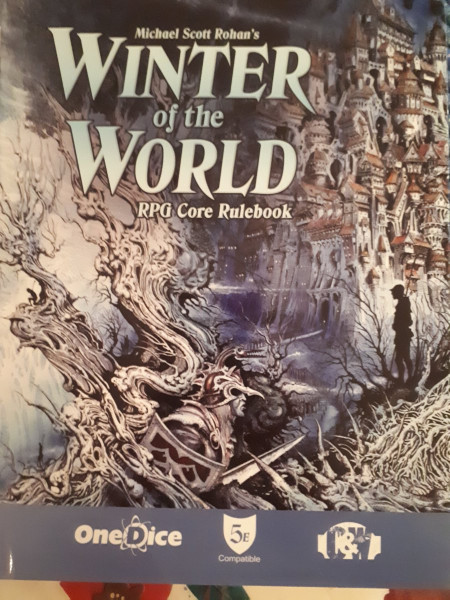 This ice age fantasy RPG based on author Michael Scott Rohan's six book series (starting with The Anvil of Ice) is a roleplaying game I've been waiting forever for, and the good folks at Cakebread & Walton (sold through DriveThruRPG in PoD format) have finally delivered on the game.

I placed my order with DriveThru a while back, and was actually wondering if I was going to have to find a copy of the game at this year's GenCon 50, but the copy of the book is here in my hot hands at last!! Hooray!!

The one regret that I have with the game is that the game stats use the One Dice system developed by C&W, but is also dual-statted for D&D v5 (boo! hiss!) Waste of paper space, if you ask me.
Collapse