An interesting question, and one where I don't really know what "staying power" means in this case, but...

If nothing else, I look forward to seeing what other folks come up with in answer to this question. :)

The snail mail this afternoon provided me with a package I've been waiting for all week. Since this is a long weekend here in Ontario (and much of Canada), if it hadn't come today I would have had to wait until at least Tuesday for it to hopefully arrive. But I'm impressed. I received my copy of the game exactly one week after I received the shipping notice from GameQuest in the UK. 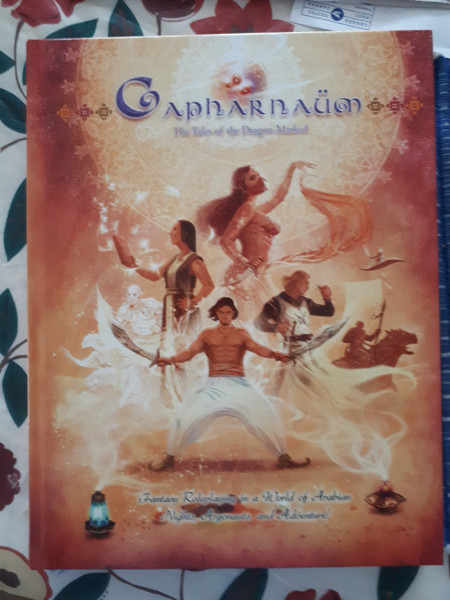 My Kickstarter backer copy of Capharnaum - The Tales of the Dragon-Marked RPG has arrived and it is... stunningly beautiful!

Capharnaum – The Tales of the Dragon-Marked is a fantasy roleplaying game set in a world of Arabian Nights, Argonauts, and Crusaders. It was inspired by the One Thousand and One Nights, the myths of ancient Greece, and the legends of the Crusades, and is a game where history meets myth, and legends are born.

One of the questions that I always ask about roleplaying games I'm thinking of purchasing is: What do player characters *do* in the game? As mentioned, Capharnaum - The Tales of the Dragon-Marked is based on the myths, legends, and histories of our own world, but it’s very solidly a fantasy roleplaying game. You play heroes – holy warriors, arcane sorcerers, kings of thieves, merchant princes, scholars, explorers, travellers, and more. The adventures you have can range from zero right through to hero – you can adventure in the danger-filled warrens of ancient cities, intrigue with courtiers, battle with armies against ancient foes, or join with those like you – the mysterious Dragon-Marked – to change the world itself. Capharnaum is a heroic game, filled with action and adventure.

The rulebook is a beautiful thing in appearance, some 384 pages in total, with nicely solid paper that isn't too thick, only somewhat glossy pages, and full of stunning artwork and a superb layout that is sure to engage the reader. The artwork is of variable quality, most of it exquisite and highly evocative of the setting and the material contained within the book and the writing (from what I've read of it so far) has that sensa wonda that is so much a part of the style of the Arabian Nights stories. I cannot wait to delve deeper into this game and its magnificent world!

While the game is due for release to the marketplace on August 31st, you can actually pre-order the game right now by following the link I've already posted. I promise that you won't be disappointed! :)
Collapse