Day 26 - What is your gaming ambition for the next year?

That's a tough question, and not really sure I have an answer for it.

On thinking about this, I would say that my gaming amibition for next year is to run no more than three different rpgs over the course of the year, and to actually play in some games at conventions (if I manage to attend any). Oh, and if I can, supplement my pension with a few more editing, proofing and writing jobs in the rpg industry.

That's about it, to be honest.

I won't be gaming this afternoon, sort of.

Tammy is still on-call this weekend, so SteveR won't be able to finish creating the player characters with her and me for the Star Trek Adventures RPG. So no roleplaying games for the day.

spross is coming over this afternoon, and we'll be playing some more Terraforming Mars today, so looking forward to that.

Well, as mentioned earlier today, Tammy wasn't able to make it for gaming as she was on-call again for work, so SteveR and I had arranged that we'd play another game of Terraforming Mars again today. 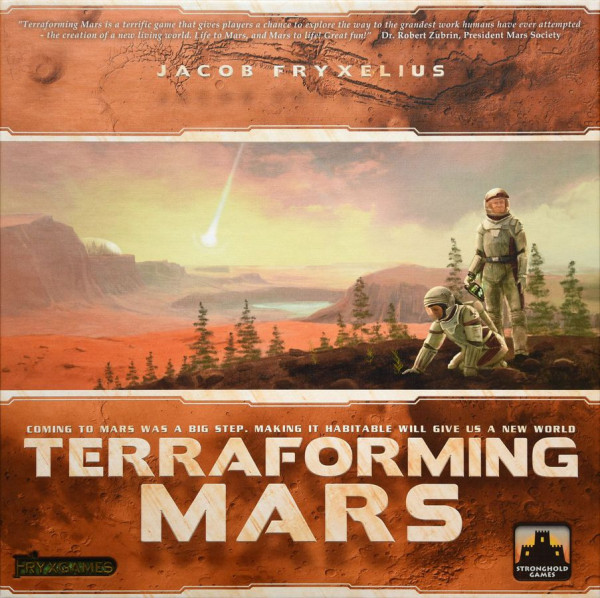 spross arrived at my house, we sat down and set up the game for play. I tried a variant of the game, in that I wanted to get ready to play with a named corporation, so rather than play the Beginner Corporation game as stated, we started with 4 Project cards that had to be bought for the regular price, rather than the 10 cards that we got for free. It made for a decent game, to be sure, and was much closer to a regular game than a beginner game. 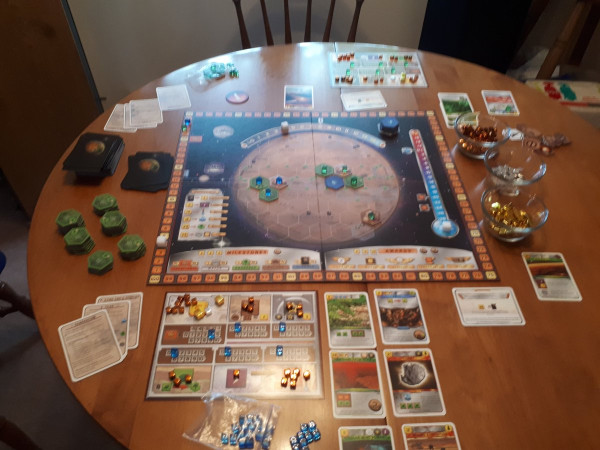 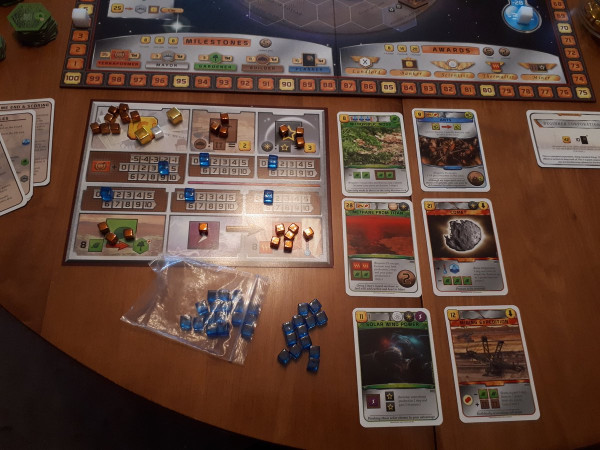 As you can see from the two pictures above, I got off to a slow start, and by the end of the 3rd Generation, the score for Victory Points was still pretty tight, but I was losing. The Project cards in my hands were all pretty expensive ones, there was no pattern that I could discern in the cards (like I said, I'm still relatively new at playing this game), though I'd already put a city on the gamp as well as two Greeneries. 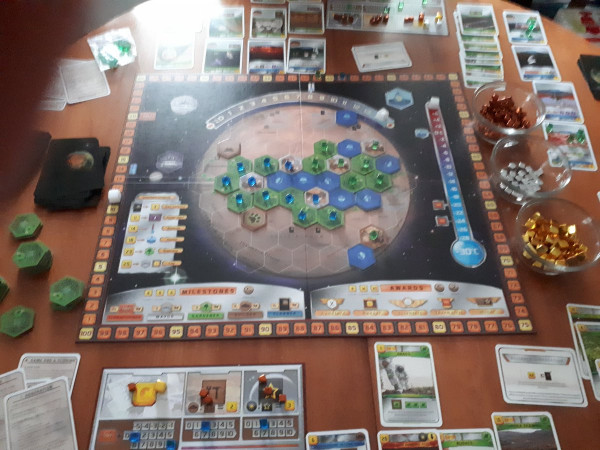 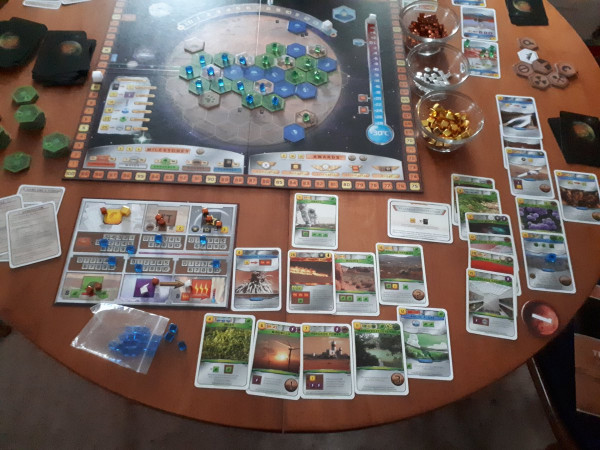 By the end of Generation 11, I needn't have worried. Not only had SteveR and I terraformed Mars, but I pulled out a 63 to 57 point victory in the game. It was all the green tiles that I had around my cities that made the difference, and to be honest, the game was a close one all the way through. That said, the important part was that we terraformed Mars! This was the first time since I've played the game that we accomplished that feat before we had to stop gaming for the day, so I'm really pleased about that result.

Terraforming Mars is such a fun game, even at this still early stage of playing the game for me. I love the decisions that have to be made, I love the way things turn out, and I love how the game plays. It doesn't feel competitive to me, even though it does have quite a few (conflict) elements to it, but it has a large, cooperative overview that one has to see. It's a game that I really like, and I don't see myself getting tired of it. Not that I get to play it as often as I like, but who knows what the future holds? Definitely play this board game if you get the chance. :)
Collapse