Just want to wish everyone a Happy Towel Day!

While it is a celebration of the life of Douglas Adams and all that good stuff, there is a message in there as well for everyone, even if one doesn't see it. So do something towel-ish today, and celebrate all things Hitchhiker. :)

After the conclusion of the CanGames convention, I usually write a "Final Thoughts" post about the convention. I wasn't going to do so this year, for a variety of reasons, but in the end the words seemed to come to me.

And that's it. The final post about this year's CanGames gaming convention in Ottawa. Hope everyone enjoyed these four journal entries about the convention, and please remember that comments are welcome. :)

As noted in yesterday's blog entry, the Friday night gamers have for the moment wrapped up their Capharnaüm - The Tales of the Dragon-Marked RPG campaign for the moment, and are eager to get into the John Carter of Mars Roleplaying Game. I had meant to post this blog entry this morning, but things got away from me and I was too dizzy to do so earlier in the day. Ah, well, better in the day than not at all, right? :) 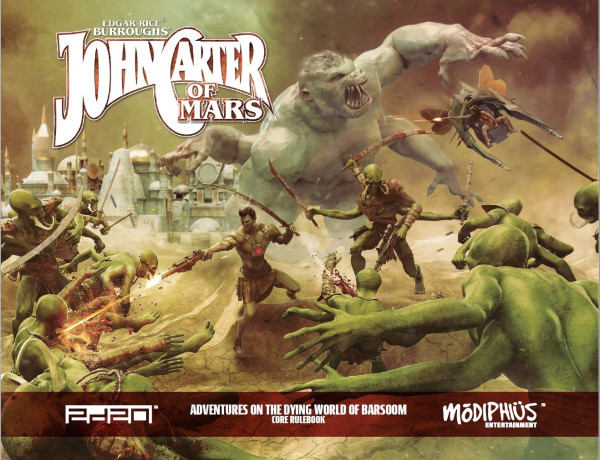 The Friday night gamers have started to play the John Carter of Mars Roleplaying Game of adventures on the dying world of Barsoom, published and distributed by Modiphius Entertainment. John Carter of Mars Roleplaying Game is a science fantasy sword & planet roleplaying game set in the world of Barsoom (what we call Mars) created in the various Barsoom novels written by Edgar Rice Burroughs.

Once the Friday night gamers showed up at my place for the evening, around 7:10 pm or so, I started off by showing them the map of Barsoom, talked with them about the game world and answered their questions to the best of my ability for about 30 minutes or so. This covered everything from basic game mechanics, the use of the d20 dice, Momentum, Luck, and some of the other unique features of the game, the various cultures of Barsoom, and a couple of other things that they asked about (including the religion aspects aspects of the game world). From that starting point, we moved on to character generation.

Character generation in the John Carter of Mars Roleplaying Game is a relatively straightforward process, made easier if you have an idea of what you want to play, but does require some thought when it comes to the Talents. (You can get an idea of how character generation for the game system works with the detailed example, Haju Hallan, that I posted up to the blog a couple of days ago.) That said, half the fun of the character generation system for John Carter of Mars Roleplaying Game is making some of the decisions around Talents as well as several other choices that are present in the character creation system. The fifteen basic Archetypes for the game - Airship Officer, Assassin, Beastmaster, Duelist, Envoy, Explorer, Fugitive, Gladiator, Guide, Healer, Panthan, Rogue, Scientist, Soldier and Spy - are a good guideline to use for creating character professions as well, as they seem to be the most typical archetypes that are found in the stories by Burroughs.

*****
KathyB - She pretty much knew what she wanted to create, and decided on a somewhat reformed Rogue, mostly a thief but with some interesting twists to the character. Santi Sarkos is a red Martian thief with a penchant for exploring and stealing and has a way with a knife.

Angela - She looked over the Archetypes and decided that she wanted to play an adventurer, specifically an explorer. Ollia Tarkun is a red Martian Explorer who doesn't tend to take risks unless she can avoid it.

Ellie - She looked over the various character Archetypes, but wasn't sure what she wanted to play at first. She decided to play Xosa Sassek, a First Born Airship Pilot who has been exiled for something she did. She's under pain of death to never reveal the secret of the religion surrounding Issus.

Mark - Looking over the Archetypes, Mark was pretty taken with the Envoy, and created a red Martian diplomat by the name of Atros Aasan who is very much in love with a woman he met in his home city's rival. He's relatively smart but gets people.

Peter - He was quite looking forward to playing the game, and looking over the Archetypes, he decided he wanted to play a former healer turned panthan (mercenary). Kantos Shamm is a Panthan with a secretive history and a knack for healing those he fights and seriously injures.
*****

All in all, an interesting group of characters with a lot of potential, and the players had a good deal of fun with the process and really did a good job of coming up with ideas on how their characters would meet, though not necessarily know each other. The players didn't really struggle with character generation, finding things relatively simple, and Ellie was fond of the Momentum mechanics. From start to finish, character generation went from 7:20 pm or so until about 9:20 pm (about 2+ hours), including going through the game world stuff and the Talent material.

After we finished character creation, I managed to go through the game mechanics with the players (who only had problems remembering the differences between using Momentum and Threat) and then ran a few nice and quick one-on-one combats as well as teaming the player characters up to face a few red Martian and then creatures in battle as well. Overall, the players told me they quite like John Carter of Mars Roleplaying Game system and rather enuoyed character generation, and are now looking forward to starting their game on Friday in two weeks (my health willing).

For that matter, so am I! :)
Collapse