Today, one of the saddest and shocking stories in Legion of Super-Heroes history to that point... 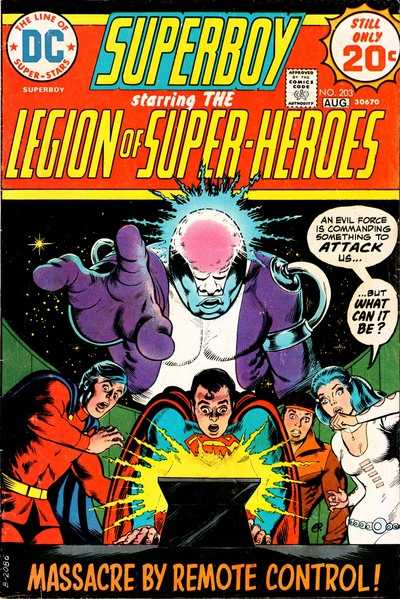 In the self-titled Part 1, at Legion Headquarters, a group of black-garbed intruders with the numbers “I” through “IV” attempt to break in. Inside, with the alarm going off, Mon-El tells Sun Boy to alert the others. In the area near a ventilation shaft, Sun Boy stops one of the intruders, dazzling them with brightness. In the lowest level of the building, two of the intruders are met by Mon-El, who wraps them up in his cape. In the Legion Museum, one of the intruders succeeds in entering and activates an infra-red effect that means the intruders have won. As the aura subsides, Superboy comes upon the intruder - who is revealed as Element Lad. It turns out this was a test of the LSH Headquarters’ security. The other three intruders are revealed as Karate Kid, Phantom Girl, and Lightning Lad. A furious Mon-El comes into the Trophy Room, looking for the member who was supposed to be on duty - Invisible Kid - who did not appear when Element Lad entered the area. With a moan, Invisible Kid appears in the Trophy Room, and collapses. In the Legion’s advanced medical lab, Brainiac 5 tells Mon-El that he’s determined that Lyle (Norg, aka Invisible Kid) is suffering from shock, from something that happened while he was invisible. Brainiac 5 uses a mento-scanner that scans his memory cells and shows them Invisible Kid’s recent memories. On a vidi-screen, Brainiac 5 and Mon-El see Invisible Kid enter a bizarre, invisible, other dimension that he can enter when he dematerializes. There he meets up with a beautiful girl named Myla. She tells Invisible Kid something that causes the screen showing his memories to explode, and Invisible Kid wakes up. Lyle doesn’t answer any of Brainiac 5’s or Mon-El’s questions when they ask if he’s been seeing Myla every time he enters that other world. He leaves the medical bay for his quarters. Brainiac 5 and Mon-El continue to talk, and Brainiac 5 hypothesizes that Myla told Invisible Kid something so nerve-shattering, so startling that it sent him into shock and that he’s suffering from hysterical amnesia. The next day, Invisible Kid talks to Phantom Girl in the Legion Museum about his powers. She understands his analogy, and realizes that when he concentrates on the invisible world, our world goes out of focus. Lyle tells her that he’s in love with Myla and that when the ban on using his powers imposed by Mon-El is lifted, he plans to ask Myla to come into his world - as his wife. That night, Dream Girl is shocked awake by a nightmare, and informs Mon-El and Superboy that she dreamed that the Legion was attacked by Validus. Mon-El is doubtful, as his master, Tharok, is locked up millions of miles away in a space prison. Saturn Girl arrives to say that her telepathic powers have picked up Tharok’s thought waves, and that he’s summoning Validus. Superboy flies to the prison to check up on Tharok, while Mon-El puts Legion HQ under alert. Superboy arrives at the space prison (Complex X33) to verify that Tharok is out of commission. He sees that Tharok is undergoing surgery after the events of his recent battle against the Legion, and that some of his brain components are on display in the Legion Museum.

In Part 2, “Invisible Kid’s Last Try”, the Legionnaires inside Legion HQ spot the arrival of Validus, and a figure racing to intercept him/it. It’s Superboy, who’s returned to Earth just as Validus has come into sight, the Boy of Steel thinking he knows why Validus is attacking the Legion HQ. The two battle high in the stratosphere, and Superboy loses. Validus throws him towards the planet, and he crashes into the Legion HQ. Taking advantage of the Legionnaires’ disorientation, Validus attacks. Karate Kid and Sun Boy attack Validus, while Brainiac 5 and Phantom Girl go to warn the others, but the Fatal Five member shrugs them off. Mon-El goes after Validus, but he uses his mental lightning to render the Daxamite unconscious. Meanwhile, in the Trophy Room, Invisible Kid realizes that it’s the components of Tharok’s computer brain that they have there that have re-formed and *that’s* what is actually controlling Validus. The invisible Lyle tries to destroy the computer brain components and does so, but only as Validus squeezes the life out of him. As Invisible Kid dies, Validus, now free of Tharok’s control, flies away. Mon-El, Superboy and Phantom Girl arrive in the Trophy room to find Invisible Kid’s corpse, and Superboy says that Invisible Kid must have figured out what was going on, just like he did. Phantom Girl bemoans the loss of Lyle’s love of his life, but Myla appears to them. She tells them she’s a ghost, though her spirit remains in the strange dimension that Lyle discovered. When she told him she was a spirit, he couldn’t accept the truth and suffered the shock. She tells them that she will now take care of him from that point on.

Commentary:
A truly beautiful in many ways, but shocking and horrifying Legion tale in others. One of the Legionnaires who has never gotten enough credit has been Lyle Norg/Invisible Kid. While he is a scientist in his own right, though not on a par with Brainiac 5, he is highly intelligent and was even elected Legion leader, meaning that (at least to me) he had a good character. Aside from the fact that invisibility is a really cool power, it was one that the writers on the Legion title over the years really didn’t do justice to, and the character faded into the background (no pun intended) at times. In some ways, Invisible Kid gets the short end of the stick (in the ultimate manner, of course) this issue, as the manner of his death is somewhat weak. In the sequence with Lyle’s death, since Lyle was invisible how did Validus know where to find him, let alone grab him? And if you are Invisible Kid, do you really just stand there and let Validus grab you and then crush you? That doesn’t sound like the smart fella that Lyle Norg/Invisible Kid was. One can credit this to writer Cary Bates, of course, who’s not been known for his strong writing since he started scripting Legion stories, but still... Then there’s the twist ending to the story, where Myla reveals that she’s a ghost. Why would Invisible Kid’s spirit end up in the same dimension as Myla, other than to give the story a sort of “very happy ending” kind of feel to it, despite Lyle’s death. I think if Lyle had reappeared at the end of the story, Jedi-like, I would have been happier, rather than having Myla play the role. On the plus side of the story, the reveal of Tharok’s brain components coming together in the Legion Museum during Lyle and Phantom Girl’s chat was a really nice touch, and I’m hoping that it was part of the script. Good foreshadowing for the reader. That said, this marks Mike Grell’s first solo job on the Legion, and it is a gorgeous issue, with Lyle and Phantom Girl never looking better. The sorrow on Tinya’s face at the end of the story is just stunning. The fight sequences with Superboy and Validus and then Sun Boy, Karate Kid and Validus are very good, and very action-packed. A couple of notes... The story references the attack that damaged Tharok in Superboy Vol 1 #190’s “Murder the Leader!”, but we saw Tharok perfectly fine, though a bit “melted looking” in “The Fatal Five Who Twisted Time!” in Superboy starring the Legion of Super-Heroes Vol 1 #198. When exactly did he suffer that massive damage that required constant surgeries in the prison? (An untold Legion tale, perhaps?) Once more, Validus escapes at the end of this story, the third time in a row where he’s not captured by the Legion. And finally, long-time Legionnaire Invisible Kid dies in this issue, only the second Legionnaire (after Ferro Lad) to die in the line of duty. (Lightning Lad’s death way back when doesn’t count, since he got brought back).

Rest In Peace, Lyle. You earned it.
Collapse