Looking at the calendar, I see that today is the 25th of July.

This means that GenCon Indy starts exactly a week today.

Dear Goddess, where has the time gone?

I have to say that I'm not going to Indy for the convention this year due to health issues, but primarily due to a lack of finances for it. The convention has just gotten so expensive and so much more expensive to attend every year, and the killing the Canadian dollar is suffering under isn't helping at the moment. And to be honest, I'm having nightmares about the blistering that my feet took at GenCon two years ago. So, no, not going this year. And to be honest, I don't know whether I'll ever go to GenCon again, as it's just... ah, never mind.

That said, I do hope that all my friends, both those I know personally and those I know virtually, who are going have a safe trip, a good convention, and don't spend *too* much money. :)

Another day means another Legion of Super-Heroes re-read. 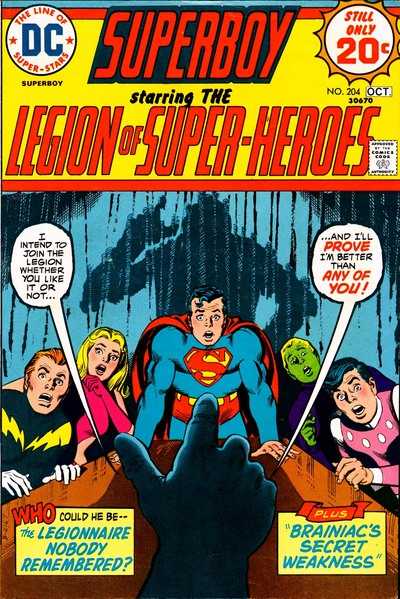 In the 30th Century, five Legionnaires - Mon-El, Superboy, Cosmic Boy, Lightning Lad, Saturn Girl - are standing before a photo-grid that they confirm as being authentic, that shows a much younger Cosmic Boy, Saturn Girl and Lightning Lad seated at a Legion table with another Legionnaire, Anti-Lad, whom none of them remember! The answer to that lies in... the 75th Century! A young man conducting a Superboy biography realizes that his time-scanner is defective as it has been warping the time stream, not just observing it. If Superboy is not inducted into the Legion of Super-Heroes, it will be catastrophic. His father, a member of the Science Court, tells his son that he will take things up with them, and they’ll send an agent to rectify the problem. However, the son feels responsible, and after fashioning a visor-like device, decides to use the in-house restricted time machine to go back to the 30th Century and fix the problem himself. However, first he makes one other temporal stop. Appearing on the table in the meeting hall where the Legionnaires from the early days in the 30th Century are deciding what to do after Superboy failed to be initiated into the Legion, the boy from the future, calling himself “Anti-Lad”, convinces the Legion to test him. He shows off his “anti-power” against Lightning Lad, Colossal Boy and Cosmic Boy and then passes the initial tests. He gets his commemorative picture taken with them (the photo-grid that the current Legionnaires have found). Anti-Lad tells the Legionnaires his “origin”: ever since he can remember, he’s had the ability of turning someone’s strength into a weakness. He also tells Brainiac 5 that he cannot take off his visor, as he comes from a world where things are 1,000 times brighter. However, Brainiac 5 is suspicious of Anti-Lad’s story, and that night, Brainiac 5 wakes him (he’s not wearing his visor) with the light from the Legion guest quarters. Brainiac 5 determines that Anti-Lad’s visor is also his power source, a sophisticated computer that analyzed the opponent’s strengths and counteracted them with a weakness. But Brainiac 5 notices that the computer also recently analyzed and created some Green Kryptonite. At Cosmic Boy’s suggestion, Brainiac 5 analyzes the soil sample from the bottom of Anti-Lad’s boot, and determines that it is composed of 20th Century minerals. The Legionnaires reach the conclusion that Anti-Lad wanted them to... He went back with them to the 20th Century when they recruited Superboy and sabotaged his initiation with the Green K, planning to take the Boy of Steel’s place as a Legionnaire. Activating a device on his glove, Anti-Lad vanishes from the scene, along with the visor that Brainiac 5 is holding, and the Legionnaires decide to give the Boy of Steel another chance. In addition, due to the post-hypnotic suggestion, none of the Legionnaires remember the last 24 hours or the Legion candidate known as Anti-Lad.

Commentary:
You would think that a time travel story about a time traveller who had mucked up a crucial event in history and wants to fix it would make for a good story. The basic concept of the story is pretty good, but once again Cary Bates turns a story that could have been great into something that is pretty much a mediocre, or perhaps average at best, tale. I don’t know why, but the denouement feels rushed and to be honest, the Legionnaires come across like idiots in some ways (and I’m not even sure why I feel that way about the story). Part of it, perhaps, comes from the fact that Anti-Lad doesn’t come across as more than two-dimensional and while I don’t think he’s handled badly, there’s a lot to be desired in him. Or maybe it’s the fact that he’s not really a villain at all. The one strength of the story is Mike Grell’s artwork, and the early versions of the Legionnaires who appear here have a terrific look under Grell’s pencils and inks. What is a bit jarring about the artwork is the future technology of the original Legion, which is of course like that of the current Legion. I really was expecting “Iron” Mike’s version of old Legion tech, and so was disappointed with that, but the story looks terrific due to “Iron” Mike’s artwork. One thing to note here is that showing Brainiac 5 as a member of the Legion before Superboy joins is a good way of lending credence to the fact that Supergirl joined the Legion before her cousin. It’s important to remember in this context that Brainiac 5 joined the Legion at the same time as Supergirl.

And the issue's controversial second story...

Atop one of the Legion of Super-Heroes’ landing pads, Saturn Girl is telling Star Boy to “cool up” (30th Century slang for “calm down”), as he’s going on furlough for the first time in over two months. His teammate, Brainiac 5, arrives to begin his own furlough. Saturn Girl tells him that she thinks he needs it more than Star Boy, as he’s been tired to the point of exhaustion every day for the last two weeks. As the two Legionnaires head for Recreation Asteroid 7, Brainiac 5 gets lost in daydreams of Supergirl, though it’s been years since she joined them on a mission. Back at Legion HQ, the Legionnaires are surprised by the arrival of someone, who tells them that given what they meant to her/him, he/she feels that he/she owes them an explanation. Arriving on Recreation Asteroid 7, Star Boy goes off to make them reservations to have a good time, and Brainiac 5 goes to check-in to their accommodations. As he finishes that, he is surprised by the arrival of Supergirl, who tells him she’s there to be with him, and convinces him to go off with her. Star Boy learns of the arrival of Supergirl, and when he finds them about to board the cruiser and head off, Brainiac 5 tells him that he quits the Legion to be with Kara (Zor-El) and tosses him his flight ring, since he won’t be needing it. Star Boy is crushed, but lets them go, and contacts Legion HQ; he’s informed that they find it very difficult to believe what he’s just told them. In their cruiser, Brainiac 5 and Supegirl run into trouble - a deadly zotron belt of radiation ahead of them. Supergirl says he’ll be fine, and wraps her indestructible cape around him to protect him. When the rays pass, Brainiac 5 thanks Supergirl, the real Supergirl, who arrived just in time to save him. She shows him what’s left of the Supergirl android he was with and all that’s left of her cape. The dying android tells him that for the past two weeks he constructed her while sleepwalking, building the Supergirl android to fill the void left by the real Kara’s absence. Coincidentally, the real Supergirl arrived to save him. And she does so yet again, as Supergirl detects that the zotron rays overheated the ship’s photon engine, that is about to explode. Wrapping brainiac 5 in her cape once more, the two escape the explosion. Back at Legion HQ on Earth, Supergirl explains to Brainiac 5 why she came to the 30th Century, to resign from the Legion. She tells him that she will return someday, and perhaps then they can pick up where they left off. The story ends with the two kissing passionately on the Legion grounds.

Commentary:
What to say about this story? Over the years of the Legion’s existence, Brainiac 5 has been portrayed as a very smart character (12th level intelligence, after all) and somewhat emotionless, but there is no doubting that he’s human and flawed in a lot of ways. His biggest fumble, up to this story, being the creation of Computo back in Adventure Comics Vol 1 #340-341 (February and March, 1966). The fact that Brainiac 5 has an obsession and crush on Supergirl to the point that his subconscious goes and spends two weeks creating an android version of the Girl of Steel, and the fact that it may be an unrequited love, says something about him. The seeds of madness are obviously a part of our Brainy, to be sure, and I remember when I first read the tale that I never thought I’d trust Brainiac 5 again. Silly me. I mean, what does it say about Brainiac 5 that he was willing to quit the Legion at such short notice and so quickly for Supergirl, even if he didn’t know she/it was an android at the time? While I was pleased to see the real Supergirl back in the pages of Legion comics, I was somewhat saddened at the decision to resign from the team. Not surprised, since she hadn’t appeared in a Legion story in what seems forever, but still... That said, her appearance in the story is too coincidental, given the whole Brainiac 5/Supergirl android story going on here, but Mike Grell’s artwork does justice to her, both the android and the real Supergirl. One thing that surprised me was that Star Boy and Brainiac 5 were going on furlough together. I mean, the two have nothing in common and you’d think that Star Boy would want to spend some time with Dream Girl, you know. Oh, and needless to say, Supergirl resigns from the Legion with this issue.
Collapse