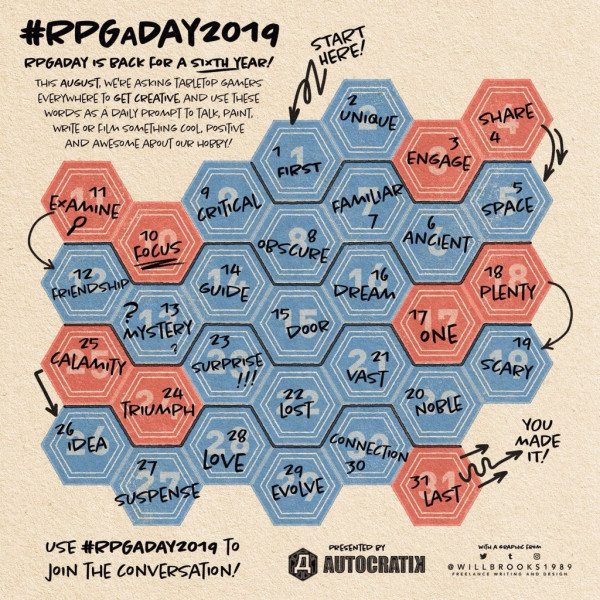 What an interesting word for the day, but so many ways to go with it...

Well, as you may have noticed, I love roleplaying games. I have quite a few rpgs in my repertoire, but most of the rpgs I have these days are in boxes in my storage room here at the house. I tend to keep the games that I'm running or the stuff that I'm reading on shelves in my den, but this has gotten tedious of late because the Torg Eternity RPG boxed sets just don't fit anywhere nicely.

That said, I've noticed that my love of roleplaying games hasn't stayed the same over the years. That's to be expected, I suppose. I started gaming when I was 20 years old or so and I'm now an aging 64 years of age. While there are certain genres (such as horror and cyberpunk and anything Japan style) that I dislike and won't play or run (with one exception), I've found my taste in games has changed. I used to be able to run games that involved math when I was younger, but now I find myself gravitating towards systems that have simple rules. (Science fiction systems are exceptions to that, as while I won't run hard sf games too much any more, there are semi-hard sf rpgs that I adore, such as Coriolis - The Third Horizon.) And not just the rules: I prefer dice mechanics to be simple, even if that means a dice pool, but prefer single type dice pools. I still love historical game settings, the purer the better, but find that these days I don't seem to have the patience for them. I could go on and on about this, but I won't. Don't want to ramble here. :)

Suffice it to say that I still love roleplaying games. Some would even argue too much, but we've all got to have our hobbies, right? :)

Now, you'll excuse me... I'm going back to reading some rpg goodness. :)


And there you have this twenty-eighth post for #RPGaDay for August, 2019. Comments, thoughts, questions, etc. are all welcome, of course.

Time for today's reread of another Legion of Super-Heroes story from the mid-1970s. 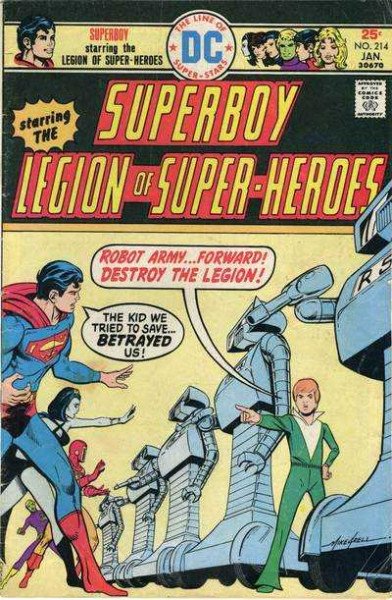 On the automated factory world of Gyrich, five Legionnaires are skulking about under Shadow Lass’s cover of darkness in order to escape detection by the robotic guards. They are there to fix what they believe is the malfunctioning defense computer. Superboy sudden takes off toward space, blowing the Legionnaires’ cover, as he has spotted a passenger ship entering the atmosphere. He manages to rescue the lone occupant, an arrogant adolescent boy, before the automatic defenses blast the ship to smithereens. The boy identifies himself as the son of Leland McCauley, the owner of Gyrich. Robot guards respond to the Legionnaires’ activities, and Karate Kid alerts the others. He and Wildfire destroy a whole batch of attacking robots. Some time later, with the Legionnaires and the boy concealed by Shadow Lass’s powers, the Legionnaires debate matters. When he hears that they may have to fight to get to the defense computer, the boy thinks he can order the robots to let them go. He shows himself to the robotic guards, and Superboy is forced to save his life again as he’s attacked by one of the robots. The robots attack again, this time taking the boy hostage, and Brainiac 5 orders the Legionnaires to stop fighting. Some time later, in a cell deep within the Central Control Complex, a mysterious older man called the Overseer arrives to gloat. The Overseer tells them he was the last living worker on the planet before McCauley fired all of the employees. It took time, but the Overseer eventually snuck back to the planet and took over the entire automated system, now holding the planet hostage. He desires revenge against McCauley, but he doesn’t yet know who the boy is. Using Superboy’s super-ventriloquism, the Legionnaires warn the boy to keep quiet about his actual identity, but thinking they are tricking him, the boy calls the guard and says he wants to talk to the Overseer. Superboy has had enough of Wildfire’s cavalier attitude, and the two come to (energy) blows, with Superboy walking through them like rain. Slamming Wildfire into a wall, Superboy tells him he doesn’t care about his personal feelings; he’s a Legionnaire, and he should act like one. Wildfire manages to keep the boy quiet when the Overseer arrives, using a pencil thin beam of energy to traumatize the boy’s vocal chords. The two Legionnaires make up. Later on, at the spaceport deck, the Overseer prepares to have the Legionnaires executed, allowing the boy to leave in a shuttle only after they are dead. Seeing the shuttle, the boy blurts out that it has his father’s name, and the Overseer grabs the boy and prepares to kill him. Superboy offers to allow the Overseer to blast the Legionnaires if he will let the boy go. While considering the offer, the Overseer is surprised when the boy fights back. The Legionnaires also fight back, Karate Kid knocking the Overseer out before he can shoot the boy. The Legionnaires destroy the robotic guards as well. Some time later, after Brainiac 5 has repaired the defense computer and got the factory back into regular operation, the boy tells them that he’s learned his lesson, that he was wrong about them, and then departs in one of the shuttles. When Shadow Lass asks about it, Superboy explains that he would have let the Overseer shoot them, but none of them would have gotten hurt - he and Wildfire are immune to the Overseer’s weapons, Brainiac 5 had his force-shield belt, and he would have wrapped Karate Kid and Shadow Lass in his invulnerable cape.

Commentary:
This is one of those strange tales that I never know really what to say about it. The basic premise of the tale, a Legion team sneaking onto the factory planet to repair a defense computer, doesn’t make a lot of sense to begin with (why does a factory planet need a defense system to begin with?). That said, the team of Legionnaires is an interesting one - Brainiac 5, Superboy, Karate Kid, Shadow Lass and Wildfire - and each of the characters is used pretty effectively. I can’t say that I was surprised by Superboy and Wildfire coming to blows sort of, as these two heroes have a very much antagonistic relationship in their beliefs and the like. The resolution (for the moment) of their differences was handled well and to the point in this tale, but the story does show Wildfire’s basic personality here quite effectively. Superboy is obviously the mission leader in this one, and I actually liked how he handled Wildfire. Two Legionnaires with some interesting future clashes ahead of them, methinks. Shadow Lass doesn’t get as much panel time as I would have liked in the story, and I do have to wonder about the ability of her darkness power to shield the Legionnaires from the sensors of the robots.

Two end notes... While we don’t learn the boy’s name in the story (which was quite annoying!), it is reasonable to assume that this is Leland McCauley IV, so this marks his first appearance in the series. It’s also interesting to note that Jim Shooter used the name Gyrich again later, as a government agent (if I remember correctly) who was a thorn in the side of Marvel’s Avengers for several years.

And then there’s the second story of the issue…

In Brainiac 5’s lab, he and Saturn Girl watch Shrinking Violet’s nightmares on a video dream scanner. She is convinced that if she ever shrinks down again she’ll be trampled by a monster. She has been traumatized by an incident in the Legion gym, when Sun Boy almost stepped on her when she was a mere three inches tall. Saturn Girl and Brainiac 5 can’t agree on a prognosis or treatment for Shrinking Violet. Brainiac 5 wants to use a hypno-beam and shock her back to her normal senses; Saturn Girl argues for a “wait and see” approach, as she’s not willing to push her friend over the edge, which she is already close to.

However, Brainiac 5 is certain he’s right, and that night he sneaks into Shrinking Violet’s room and using the hypno-beam kidnaps her. He takes her to the planet Klorra, a planet of giants whose natives all died in a world-wide plague years ago. As Violet comes around, she believes she’s shrunken down because of the giant objects around her. She’s attacked by a large, rat-like robotic “pet” of a Klorran, programmed to collect and dispose of refuse. Dodging out of the way of the blob-like almost plastic wire hairballs of matter it ejects at her, Violet falls off the table and is engulfed by another one of the blob-like balls. Brainiac 5 is revealed to have already been captured by the robotic creature before he had the chance to use his illusion-meter. Now, both he and Violet are captured and in deep trouble. As Brainiac 5 is starting to think he’s not as smart as he thought he was, the robotic creature seems to short-circuit itself. This was, in fact, Shrinking Violet’s doing. She’s back to her old self again. When the robot forced her off the table, the air currents should have slowed her fall if she’d been shrunk; when she realized that, she shrank down and eluded the strands of glob. Brainiac 5 thanks her for saving his life, but Violet thanks Brainy for teaching her a valuable lesson: “No matter how small you are, if you’ve got confidence in yourself, you’re 10 feet tall!”

Commentary:
This is a story that I have really liked over the years, as it puts the focus squarely on Shrinking Violet, and offers a bit of insight into a woman who regularly shrinks down to small size and has to deal with “giants” all around her. However, it is also in a lot of ways a rather creepy story. In this tale, Brainiac 5 not only lies to his teammates, but sneaks into another teammate’s room, hypnotizes her, kidnaps her, and takes her to Klorra where she (and he) are put in mortal peril. Brainiac 5 may be doing this out of logic and compassion (in his own way), but this is very indicative of Brainy’s personality and his arrogance that he’s right much of the time. This time doesn’t exact a price as some of his experiments and theories have in the past, but it does show that he’s not overly trustworthy in some ways and that his moral code is a bit...skewed. And to be blunt, when Brainiac 5 kidnaps Violet, it appears that she sleeps in the nude so that caused current me all kind of other thoughts about Brainiac 5 that we won’t go into here. When I take this into account with Brainiac 5’s other nocturnal adventure from Superboy starring the Legion of Super-Heroes Vol 1 #204, this led me to lose trust of the heroic Legionnaire at this point.

Final note... In an interesting coincidence, both stories in this issue feature the Legionnaires facing robots.
Collapse