Time for another Legion of Super-Heroes re-read blog entry, once more another issue of Karate Kid's solo comic... 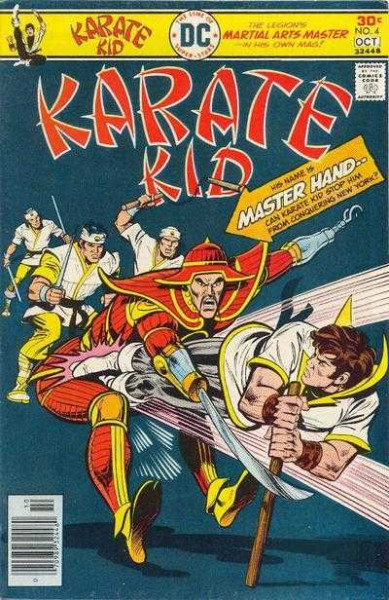 Opposition:
Raider robot; Master Hand, a samurai, and his minions

Synopsis:
The story begins in the 30th century on a mining asteroid as four Legionnaires (Brainiac 5, Lightning Lad, Princess Projectra and Mon-El) are battling a chromium-steel robot armed with sensors to detect and nullify super-powers. Mon-El shouts for Val to act now, and Karate Kid appears suddenly and attacks, destroying the robot. The Legionnaires are grateful for his help, Brainiac 5 pointing out that he doesn’t have any powers so that the robot was helpless against him. Karate Kid flares up that his team-mates pulled him back to the present-day in order to save their lives because he doesn't have any natural abilities and says they can just “stuff the humility bit and send me back!”

Karate Kid returns to 1976 New York City just in time to learn that at PS 38, a new terrorist who calls himself Master Hand has taken one class of students hostage as well as a teacher, Val’s friend, Iris Jacobs! Master Hand demands that all Western trade and influence in the orient be removed within one month or the streets of every American city will run red with blood. He tells them they have 24 hours to agree, or the bloodbath starts here in the school with the death of one of the “purveyors of decadence” that they call teachers, starting with Iris. Needless to say Karate Kid is anxious and eager to rescue them, but he is stopped by the police. Or at least they try to stop him. After a small fight with them, New York City Police Commissioner Banner arrives, and tells Val to stand down; he knows who he is, but refuses to tolerate vigilante-ism in his city. Banner summarily orders Karate Kid off the premises. Inside PS 38, we learn that the so-called samurai Master Hand was born without hands. He grew up in Japan with hooks instead of hands, a lowly bureaucrat slowly seething that Japan was becoming more and more Westernized. Finally having enough, he switched one of his hooks out for a samurai sword and came to New York to take little children and women hostage. When he talks of justice, Iris tells him that she suspects that there will be a bunch of parents demanding justice in about 24 hours. Later that night, Karate Kid stows away hanging on to a patrolling NYPD helicopter and drops to the roof of the beleaguered school. Unfortunately, Master Hand has placed some men on the roof of the school in case someone thought to come at him from the roof entrance, and what follows is a scene of carnage as Karate Kid battles the henchmen on the roof, making a few puns along the way. Crashing into the room where Master Hand is holding Iris and several of the children, he attacks the villain, telling Iris to get the children and flee. This proves impossible, as Master Hand’s henchmen are holding most of the children in an adjacent room (perhaps the gymnasium?) and so Karate Kid stands down. Karate Kid makes a snide comment about true honour and how little bravery there is in murdering women and children, and issues a challenge to Master Hand to fight him. Master Hand agrees to the challenge, to the death, and his men will obey the winner of the fight and bury the loser. The Kid and Master Hand fight and surprisingly, for someone who’s faced Mano and other 30th Century threats, Master Hand is able to cut Karate Kid a couple of times. Finally, Karate Kid is able take him down using a barbell shaft to defend against Master Hand’s sword arm. Master Hand, totally beaten and his honour intact, attempts to take his own life but Karate Kid prevents him from committing suicide, shattering the sword arm with a devastating kick.

As Karate Kid and Iris lead the children to safety, Police Commissioner Banner catches up with him and is about to arrest him when Perkins, an agent from the Governor’s office, arrives and grants Karate Kid Honourary Police Officer status in the state of New York. This leaves Banner annoyed, and with egg on his face.

Comments:
This fourth issue of Karate Kid’s solo comic is one that, for me, is a story that isn’t anything special but does have a few things worth commenting on (and not necessarily in a good way). The opening sequence with Karate Kid back in the 30th Century, helping the Legion on the mining asteroid is one that I wasn’t expecting, but is there to enhance or reinforce the Karate Kid idea of “I don’t have powers, now send me back to the 20th Century.” It’s a trope that through the first four issues is starting to get tired. This is compounded by the fact that Brainiac 5 is one of the Legionnaires who needed saving and he doesn't have any super-powers that the robot could have nullified, either. Not to mention I find it hard to believe that Lightning Lad and Mon-El couldn't have found some way to destroy a measly robot. Of course, the whole purpose of the scene is to make sure the reader knows that Karate Kid is currently living in the 20th Century, so... The sequence where Karate Kid wants to go into the school to help save Iris and the kids was fine, except for the part where there’s a page of him fighting the police. This just seems a way of extending the story another page or two, as frankly Commissioner Banner (really?) could have just arrived on the scene and forbade him to go in on pain of jail time - which is what happened anyway. Shoddy plotting and writing here. The plot of the story seems a bit stereotyped. Yes, there’s the matter of Master Hand and his plan overall, but this seems to echo the plot of Karate Kid Vol 1 #2. The desire of Nurike to get rid of the United Nations can be compared to this story, though this has a wider vision to it in some ways with less of a chance of it succeeding. In terms of Master Hand himself, I’m not sure how I feel about the character, but based on what I know of Japanese culture and the samurai (admittedly from reading books and the like on the subject), his origin story didn’t seem quite right. I think there isn’t a Samurai class any longer in Japan, the closest being something along the lines of the Daughters of the Revolution, perhaps? And I don’t think that people in Japan who are different are embraced so well. If this man was born without hands, most likely he would have been hidden from society and kept away from city hall or wherever it was he worked.

The artwork by Ric Estrada and Joe Staton is all right. The fight and combat scenes are well staged and paged, but there’s nothing too exciting or “jump off the page” for my tastes. Once again, I liked the fact that Karate Kid is actually drawn and portrayed as being Asian, and one of the best parts of the story was the scene where Master Hand sees how well Karate Kid can fight and says that he must have some Japanese blood in him. The end of the story appeared to be somewhat rushed and confused. In the end, Karate Kid embraces his more occidental roots and saves Master Hand, rather than letting him commit seppuku, which would have saved everybody the trouble of incarcerating him and re-patriating him back to Japan. I don't mean to imply that Karate Kid should not have saved him, but the way the end of the story plays out proves that either Karate Kid doesn't know as much about Japanese culture as he thinks he does - or the writer doesn’t. There should have been some more dialogue there, but I’m not wise enough in samurai culture to know what it should have been.

Final Notes:
The appearance of the Legionnaires chronologically seems to come between Superboy starring the Legion of Super-Heroes Vol 1 #218 (Tyroc joins) and #219 (the Fatal Five return).


Next Issue: Superboy starring the Legion of Super-Heroes Vol 1 #220
Collapse