The Ottawa Senators will be playing this evening (Wednesday), when they visit the Toronto Maple Leafs, which I'm looking forward to seeing. But...

I don't know whether I'm pleased or not about the off-season and summer that the Senators had, though I will freely admit that changes needed to be made. The deals and signings for former Maple Leafs (not to mention the new coach, D.J. Smith) are...intriguing, and give a whole new meaning to the Battle of Ontario this year, but we'll have to see how the dust shakes out on the deals. Nikita Zaitsev will be a good addition to the team, as will Tyler Ennis, but Connor Brown and Ron Hainsey remain unknowns to me (least of which because of the latter's age). That said, if they bring stability to the Ottawa defense and some scoring punch, I won't be unhappy. Artem Anisimov is an interesting addition, and should make an impact on scoring; hopefully his defensive abilities will be equal to the task at hand. The signing of Thomas Chabot to a long-term deal, and the signing of Colin White to another good deal are indicative that the Sens are trying to build the team around these two, but with a club owned by Eugene Melnyk anything is likely to happen. The rebuilding team this year, with a mix of veterans and youth, will be interesting and fun to watch, but I suspect there will still be some some very loooooong nights ahead for the fans, I suspect. I'm a die-hard Senators fan, and I like to think (as all hockey fans do at this stage of the season) that the Sens will make the playoffs, but I'm realistic enough to know that this isn't likely to happen, though we could all be surprised. That said, the Sens finished in in last place in the league last year (if I remember correctly); the only way to go is up, right? :)

I'm not sure if there are any rules changes this year, but will catch up on those as and when they happen. I still wish the league would get rid of the shootout and overtime business in regular season games, as overtime should be reserved for the playoffs, but 3-on-3 overtime was exciting last year, to say the least! 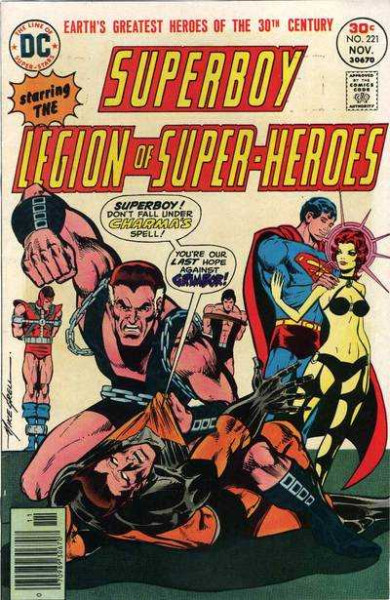 Synopsis:
In Part 1, “The Living Key”, Superboy and Timber Wolf answer alarms at the Metropolis Fusion Powersphere where someone has managed to break in. Ordinary vandals can’t access that place, and thus Legionnaires are on 24-hour guard duty. As they make their way through the complex looking for the intruders, Superboy notes the lead radiation shielding prevents his use of super-vision. The two heroes split up for their search. Grimbor the chainsman ambushes Timber Wolf and between his titanium manganite chains and his super-strength and endurance is able to take down the Legionnaire. As Superboy arrives, he is mesmerized by Grimbor’s accomplice, Charma, who holds him enthralled. When Grimbor is finished with Timber Wolf, he also captures the helpless Superboy. The next morning, the universe’s richest man and the founder and financier of the Legion, R.J. Brande, is going about his morning’s business when he receives an unexpected delivery - two very large metal cubes. Charma arrives with them, and demands 100 million dollars to ensure the safety of the Legion, and then gives him 24 hours to consider the offer. Brande is unable to stop her, but when she leaves realizes there is someone in the nearest crate. He calls for the Legion’s assistance. Six Legionnaires respond to the call, and when Colossal Boy breaks open the crates, Superboy and Timber Wolf pop out of them, trussed up in specialized chains. Shrinking Violet goes inside the chains and determines the locks are very sophisticated, requiring multi-directional expanding keys. Fortunately, Chameleon Boy is able to reshape his hands into the unique keys required for their locks. The chains and locks vanish, leaving no clues or evidence. When Brande tells the Legionnaires what happened, Superboy says he has a vague memory of the helpless looking girl, Charma. The Legion refuses to allow Brande to pay Charma her extortion money.

In Part 2, “Charma and the Chain-Maker,” on the distant lonely asteroid where Grimbor has his smithy, Grimbor tells Charma that they don’t need Brande’s money and that he doesn’t want to risk fighting the Legion. He reminds her he’s the greatest master of bondage, restraint and security in the universe, who even once kept Validus a prisoner. Charma reminds him that she grew up an orphan at an all girls school. She was a mutant with the hypnotic effect to control males who are near her, but her ability has the opposite effect on females. She was tortured by the headmistress and by the other girls at the school. When the headmistress called on Grimbor in order to create special bonds for her, Charma was able to control him so that he freed her. Now, she wants money and a bit of payback. Grimbor still resists, but she convinces him that capturing the Legionnaires will be a new challenge for him. He agrees to go along with it. The next day, Charma calls R.J. Brande to arrange delivery of her money, but he refuses to pay her. She cuts the line, but not before Brande’s special tracing equipment allows him to realize that she was calling from inside Legion HQ! Brande decides to rush over there.

At Legion HQ, Grimbor and Charma tangle with Colossal Boy and Shadow Lass first. Charma controls the male Legionnaire, thus allowing Colossal Boy to be easily be beaten by Grimbor. Charma is attacked by Shadow Lass, whose blind hatred of her prevents her from helping Colossal Boy, but Grimbor then punches her, knocking her out, and Grimbor then uses special chains on both Legionnaires. The two villains next come upon Cosmic Boy, Chameleon Boy and Superboy. While Superboy and Chameleon Boy are unable to do anything, Charma knocks Cosmic Boy out with a chair, and Grimbor binds Cos up in a special rope and then binds the hapless Chameleon Boy (who’s in the form of a comfy chair) in a thymo-plastic bag and Superboy in inertron chains. Timber Wolf and Light Lass have been monitoring Grimbor and Charma and believe that if they divide them then they can conquer them. They maneuver their foes into a hallway where a steel door drops, separating them.

In Part 3, “Divided and Conquered,” Timber Wolf attacks the surprised Grimbor and seems to have the edge on him, but when Charma calls out for help, both the hero and the villain smash through the steel door and Timber Wolf, seeing Light Lass beating the stuffing out of Charma, attacks Light Lass and knocks her out for a good while. Once Ayla is down, Timber Wolf is no match for Grimbor and he binds the Legionnaire once more in titanium manganite shackles. Charma exacts a bit of revenge by kicking the unconscious Light Lass while Grimbor binds her with an absorbium spiral band to nullify her powers. R.J. Brande arrives at Legion HQ, and Grimbor and Charma show him the seven Legion hostages. He is willing to pay Charma’s new amount demand of a trillion dollars ransom, but now Grimbor refuses to sell. He is so proud of himself for capturing them that he wants to keep them as trophies. Charma can't talk him out of it, so she decides to kill Light Lass as an example, hoping he will come to his senses. Charma goes to the storage vault and prepares to kill Light Lass, but Shrinking Violet has been hiding, watching them. As Charma aims her weapon at Light Lass, Violet grows to full size and strikes. Her violent physical attack on Charma enrages the male Legionnaires; they break free of their restraints, and fly at Shrinking Violet at full speed. When Violet times her shrinking just right, they smash through the wall into the room where Grimbor and Brande are, taking out the former seemingly by accident.

Some time later, the Legionnaires discuss the fact that Grimbor is at Science Police Headquarters, ironically in a top security cell. However, ironically as well, while searching Grimbor’s bag for the keys to the girls’ shackles, they also found bonds that fit Charma perfectly and neutralize her hypnotic powers. They realized that Grimbor had planned to keep Charma shackled, a prisoner of his love, and make sure she never escaped.

Commentary:
This is a fascinating, but somewhat disturbing, tale of the Legion of Super-Heroes, but has some remarkable elements to it. First of all, it introduces the two new villains, Grimbor the Chainsman and Charma, and provides interesting bits of backstory to both of them. Charma is more the villain of the story here than Grimbor, with her desire to accumulate wealth and seek a bit of revenge for her abuse at the hands of females all her life (seemingly), but her motivation is reasonable and her power is certainly unique in the Legion comics to this point. Grimbor, on the other hand, comes across as a craftsman who is very proud of his previous work (he even imprisoned Validus!), but has been somewhat corrupted by his love of Charma. Whether he truly loves Charma or that is part of the influence of her power is a matter that is not addressed here, but could easily have been. The two of them make a good team, and their abilities complement each other quite nicely. Secondly, the story sheds some interesting light on R.J. Brande. Aside from his somewhat less corpulent appearance, Brande is obviously not just a rich man and Legion founder and financier; he is very much their friend and their protector and almost seems to like/love them as his own children (which proves to be ironic down the road). Speaking of love, Light Lass’s love and caring for Timber Wolf are obvious in the story (and his for her, as well), but she gets rewarded by being punched and knocked unconscious by her love. Really rough on her, methinks. On that subject, this is the second time within a year that Light Lass has been slapped/hit by a male Legionnaire. I have to wonder if this is coincidence or whether Jim Shooter disliked the character somewhat.

I mentioned to start this commentary that this is a disturbing tale as well. In many ways, this story is infamous, perhaps the most infamous of the Legion stories from the Seventies, due to its subject matter of bondage in various ways and by various means, and in the manner in which Mike Grell chose to illustrate it. This story was definitely shocking to me in so many ways for its time, and yet it’s an effective tale for all of that.

Finally, I will say that I really appreciated the fact that it was Shrinking Violet, the smallest of the Legionnaires, who was able to save her teammates, but I do have to wonder why she wasn’t influenced throughout the tale by Charma’s power that made women hate and attack her.

Final Notes:
R.J. Brande's initials stand for Rene Jacques... It should also be noted that in this issue, Brande is no longer overweight, but appears to be somewhat older than in previous appearances... Grimbor is not shown carrying any chains or bags when he is fighting the Legion. No "gym bag" full of his toys is ever shown, either so where is he pulling them from?... And for that matter, how would the thymo-plastic bag holding Chameleon Boy not suffocate him?