As is my standard usage of my blog space at or near the beginning of the month, I present the listing of my September, 2019 reads.

The Ruinous Sweep by Tim Wynne-Jones

Mermaids and Other Mysteries of the Deep edited by Paula Guran

And that was my reading for September, 2019. This was a pretty decent month of reading all things considered and given the sheer amount of various stuff that I read this past month. There were also a good number of comics thrown in for extra measure. It was actually an average month of book reading for me, and most of the books this month were pretty enjoyable, though nothing really stood out. Anyway, the books that I enjoyed the most were...

None to mention here.

Here's the next entry in the Legion of Super-Heroes classic re-reads, another exploit from Karate Kid's own title. 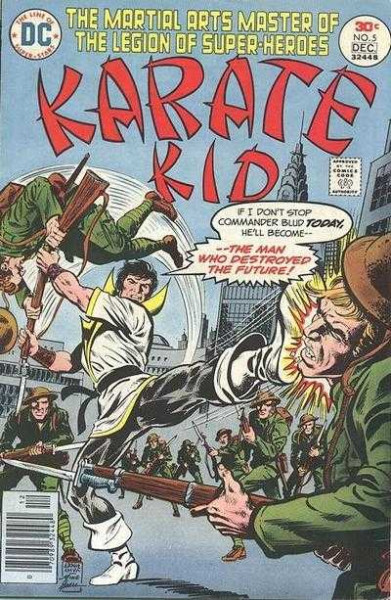 Opposition:
Commander Blud and his soldiers

Synopsis:
It's Veterans' Day, 1976 and Karate Kid is the guest of honor at a New York City parade. The Kid and Iris Jacobs are the only ones at the front of the dais, and Karate Kid tells Iris that in the 30th Century, war is something that is abhorred, but in the 20th Century they seem to revere it. Iris tells Val that he has to stop being so pessimistic and learn to enjoy himself. Suddenly, World War I soldiers marching in the parade turn their weapons on the dais and attack. Karate Kid moves in to the attack, but when they tell him their target is not him but Iris, he leaps at her attackers, but the distraction has been enough for two of them to get their hands on her. As the Kid continues to fight them to free Iris, his wristband starts beeping with one of the wrist decorations flashing. After a moment’s agonized hesitation, Karate Kid rushes off, seemingly to answer it. The fake soldiers are amused by this, but the captive Iris is shocked and horrified.

Ten minutes later, back at his apartment, Karate Kid finishes making his “report” to a monitor globe. He says that he has reported in despite the fact that it may cost a woman (Iris) her life. The voice on the other end reminds him of the conditions of his test: he is to report to the monitor globe whenever the signal coil in his wristband commands it. As their conversation ends, his landlady interrupts and offers him a bowl of chicken soup but he declines, and rushes back out onto the street to rescue Iris.

However, Karate Kid realizes that he doesn’t know where to look for Iris! There is no trace of the parade, the guests, or police investigating the disturbance. Instead, Karate Kid finds an old lady, who drops her hanky, and asks if he’ll be kind enough to pick it up. However, the old lady is actually one of the soldiers from the attack in disguise, who after stunning Karate Kid with his handbag (obviously something heavy there), leaves a note for him with the words “Empire State Building, Reserve Elevator C” and a series of numbers to push on the coded button selector. He goes to the Empire State Building and takes the reserve elevator and presses in the codes. Soon, he is some mile beneath the city, and as the elevator doors open he emerges into what appears to be a museum-like exhibit of various military gear. As he moves through the military museum space, towards a set of forbidding half-arch doors at the far end, he is attacked by another group of soldiers concealed among the various exhibits as part of it. A voice tells him that he’s proven himself, even by *his* standards, and a tall, imposing man walks in and introduces himself as Frederik Sanguine, but tells Val to call him Commander Blud.

Commander Blud explains to Karate Kid that he kidnapped Iris in order to force Karate Kid to negotiate with him. Blud wants to trade Iris for information about the future. Specifically, Blud wants to know who will be in World War III so that he and his mercenaries can support the losing side. Blud wants to give his "army" an opportunity to fight for the "losing" side so that he can prolong the battle and potentially make it possible to win. When Blud read in the newspapers that Karate Kid was from the future, he knew that he wanted to convince Karate Kid to help him. Karate Kid refuses to give him any details to him about the future, so they fight, Blud saying that he wants to see how much pain the Kid can take. As they fight, Commander Blud challenges Karate Kid to deny that he, too, enjoys the "splendour" of battle, and that it is not just some type of "nobility" that motivates Karate Kid to fight against evil. Karate Kid doesn’t give him an answer to the question, and then takes the fight to Blud and seems to be about to win. However, Blud uses knock-out gas on him, from a ring he has on one hand.

Commentary:
And so another issue of the Karate Kid comic comes to a close. Truthfully, I’m still not sure what to make of this issue of the story. The basic premise of the story, a villain who’s out to place the hero under his control by capturing his female sidekick or love interest so that he can learn the future of some events is pretty much a trope in the science fiction genre, especially in the time travel one. The villain knows about Karate Kid’s time travel since the Kid revealed that he was from the future in previous issues of the book. Something that, I have to admit, I would not have done myself. The story starts innocently enough, with a Veterans Day parade, but it’s interesting to note that Karate Kid and Iris are seemingly alone on the dais, with no sign of the mayor or other dignitaries with them. This suspicious element is borne out in the attack on Karate Kid and Iris, but it was a good twist to find out they were after Iris, not Val, to begin with! The fight with the fake soldiers goes as you’d expect, until the unexpected summons that Val receives on his wristband. I was shocked when Karate Kid rushed off to answer it, leaving Iris in such mortal peril. Although Val’s hesitation and anxiety are well depicted here, it strikes me as very, very strange that a Legionnaire in the midst of protecting some innocent civilian would walk off like that. This implies that something important has arisen. The conversation that Karate Kid has with the voice on the other end of the monitor globe is notable for the half-hearted complaint that Val makes about Iris possibly being killed; the fact that he remains there for the communication is made clear by the conditions of his test mentioned, something more for the benefit of the reader than for his, as Karate Kid is fully aware of the conditions of the test. The rest of the story proceeds as one would expect in an issue of Karate Kid’s own comic - there’s fighting, some introspection, a few wisecracks, and a couple of other things that are typical of this series even this early on. But all that changes with the introduction of Commander Blud. Blud comes across as a military man, but his interest in changing the outcome of future battles based on Karate Kid’s knowledge of the future strikes me as being a bit too simplistic. I mean, how *exactly* would knowing which countries were in (or are going to be in) World War Three risk re-writing history and/or the future? For that matter, how does Karate Kid know that World War III wasn't started by this man in the first place?

The reason I’m not sure what to make of this story is that, to be honest, the story introduces some time travel elements that can make my head explode. And for that matter, how does Blud intend to get to the battles of World War III to change the history of the combat and ensure that it continues? And for that matter, why want the fighting to continue? Perhaps there’s another villain behind the plot...

Final Notes:
The term ”sanguine" means to either be positive or optimistic, or to be bloodthirsty or bloody. According to Commander Blud, that is his real last name... Note that no Letterer was credited for this issue.


Next Issue: Superboy and the Legion of Super-Heroes Vol 1 #222
Collapse