And here's another Legion of Super-Heroes classic re-read entry to wrap up the week. 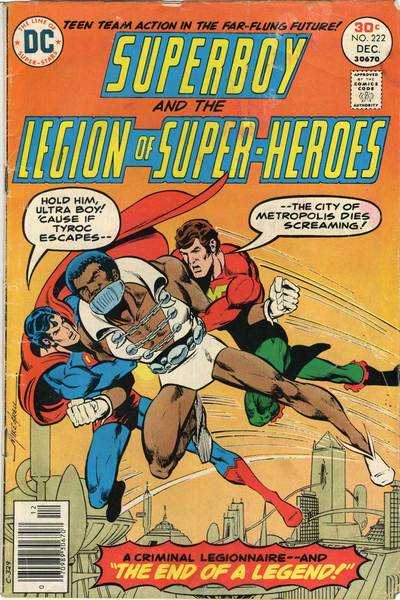 Synopsis:
"This Legionnaire Is Condemned!"
On Earth in the city of Metropolis, a strange sonic cry is heard that shatters reality. Some hours later at Legion Headquarters, Science Police officers arrive to talk to the Legion about the bizarre events that have plagued the city for the last twelve hours. The Science Police believe that one of the Legionnaires, Tyroc, is responsible. Elsewhere, at an outdoor shopping plaza, a strange unearthly cry is heard and then it starts to unexpectedly rain, the rain sticking to everything and everyone it touches. Back at Legion HQ, Legion leader Mon-El explains to the Science Police officers that Tyroc wanted the Legion to move their head-quarters to his island home of Marzal, to help integrate his society into the world at large. When the Legion refused, Tyroc stormed out and vowed to make things difficult for the city so that they would beg the Legion to leave. Mon-El promises the Science Police that the Legion is trying to locate and capture Tyroc. The next day, the trees at Metro-Park suddenly turn into attacking plants and massive branches as another sonic cry rings out. Superboy, Ultra Boy, Princess Projectra and Shadow Lass shed their disguises which they used while staked out at the park. Superboy and Ultra Boy cut the vegetation down to size. With Superboy absent, Ultra Boy tells Princess Projectra that the Boy of Steel suddenly flew into a tree. Tyroc emerges from the tree with a super-sonic cry that makes Superboy dizzy and unable to pursue him, but Shadow Lass blacks out the area, causing Tyroc to slam into a cluster of sky-towers, and the Legion captures him. The Legion turns Tyroc over to the Science Police, and news of his capture is broadcast throughout the city.

Some time later, the Legion arrives at Science Police headquarters with a civilian criminal in tow, telling the Science Police that Tyroc is innocent and they have captured the real culprit. Claiming that Tyroc was framed, the Legion says that their prisoner did so by by recording Tyroc’s super-voice and using it to cause havoc in the city. Brainiac 5 plays the tape recorded version of Tyroc's voice in the SP Chief’s office and sure enough, the room appears to bend the laws of physics, and then muster up the plants such as occurred in Metro-Park. Tyroc is released from prison. As soon as the Legion departs, the "suspect" in the cell flies away in the form of an insect and rejoins the Legionnaires on their cruiser. On the cruiser, Shadow Lass is told the truth and the small insect arrives and transforms back to Chameleon Boy. The Legionnaires explain to Shadow Lass (and the reader) that they framed Tyroc in order to hide the fact that Tyroc was using his voice powers to locate a hidden bomb. Tyroc tells her that no recording device can reproduce the extreme tone frequencies and decibels of his voice. Tyroc departs the ship in mid-flight, and soon the havoc begins again as one of his cries causes a fierce wind to blow. However, Tyroc finds the bomb and defuses it, then takes it away to see if fingerprint analysis will help them determine who set it. Some time later, the Legion tracks down Fenton Pike through his fingerprints; he’s a disgruntled civil employee. Pike had failed the police academy tests, so was extorting the city for revenge. He had boasted that he was affiliated with the SP, so the Legion could not work with their allies to find the bomb, not knowing who they could trust. That night, a Science Police broadcast explains the deception to the public, how Tyroc is not a criminal and the truth of the matter.

Commentary:
This story is one of the more clever tales of the Legion that we’ve seen over the last little while, and it’s ironic that the story is from the pen of Cary Bates. This marked the last Legion of Super-Heroes tale from Cary Bates. Since The Flash was to be published monthly, Bates left this title to concentrate on that one. It’s actually fitting that his last Legion story features Tyroc, as the hero was his own creation, and the story is a convoluted tale where the hero pretends to go bad. The notion that the bad guy in the story is somehow involved with the Science Police, and thus the Legion can’t tell them the truth of what’s going on, is a great idea and works really well in the story. The fact that the Legionnaires hid what was going on from Shadow Lass because there just wasn’t time is a bit of a flimsy excuse, but I guess it worked to make her reactions in the “fight” with Tyroc more realistic. I also liked the idea that Tyroc would ask his fellow Legionnaires to re-locate their headquarters to Marzal. Within the context of the whole Tyroc as a Legionnaire storyline (which was told in Superboy starring the Legion of Super-Heroes Vol 1 #216), this actually makes sense. Needless to say, in typical Cary Bates fashion, the story doesn’t do a straight line plot but rather one with his typical twists and turns instead. I do have to wonder why Superboy or Mon-El couldn’t have used their vision powers to find the bomb. Hmm, I suppose if they had, it wouldn’t be a typical Cary Bates story and wouldn’t have been a Tyroc story. So instead, the Legion goes to an extreme and causes plenty of animosity towards Tyroc specifically and the Legion generally in the minds of the people they are sworn to protect. I would hazard a guess that R.J. Brande will have to pay a pretty penny to fix some of the damage his over-eager Legionnaires caused to Metropolis this time out. Thus, though Cary Bates doesn't necessarily leave the Legion comics stage on good note, there is the plus side that Tyroc is shown to be a strong-willed character with a heart of gold. It’s also interesting that his super-voice cannot be re-created by any recording device. Of course, Princess Projectra can re-create the effects...sort of. She is cast again as the unsung hero in this issue, with almost no dialogue, yet again.


And the second story in the issue…

Synopsis:
Three Legionnaires are on their way to Zentor to help honour the legendary hero Questar. The three Legionnaires watch vidi-tapes of the hero doing his thing, and Light Lass is a little bit of a hero-worshipper of Questar’s. When the Legionnaires arrive on Zentor, they discover it has an orange sun; Superboy notes it will halve his powers. They are greeted by a representative of Zentor, Glad Hander, who checks the guest list. They’ve never heard of the Legion on that world, but the Legionnaires have replaced the Earth President for the ceremony. Questar arrives as if on cue for the ceremony. Timber Wolf notes that he’s never seen Light Lass so starry-eyed before, but she’s got good reason to be. As the ceremony is about to begin, however, the Every-Ten-Years Monster arrives, right on schedule. The people of Zentor knew that the monster would arrive on this day, so had arranged to have Questar on the scene this time around, as he had declined before. However, Questar begs the Legionnaires for help. He says that he’s a writer who uses a mentor-recorder to make up story tapes of his so-called exploits. He freezes with nervousness and indecision. The Legion steps in to take on the creature. However, the monster is too strong for even Superboy, with his reduced powers, and Light Lass’s abilities don’t even slow the monster down. Superboy then uses a maneuver he saw Questar use in one of the tapes, using a heat vision blast to get the creature to expose the pressure point on its neck, and then take it down with an aimed strike. While the Legionnaires discuss what to do with the creature, it vanishes! Questar reveals that he actually does have a super-power: teleportation, which he’s used to teleport the creature to a distant asteroid where it can do no harm. The citizens of Zentor are angry at Questar for being a fake, wanting to shower ovations on the Legionnaires. However, Superboy reminds them that they too were fakes, luring Questar there for the purpose of fighting the creature. Superboy explains that no one is perfect, and that you judge a man by the good in him. And that the legend of Questar should be an inspiration for them all. The Legionnaires say they’d be honoured to remain as guests at the “King of Heroes” celebration for Questar.

Commentary:
This is a story that doesn’t really stand out in any ways, though the premise is a bit of a weak one. The story is written by Jim Shooter, and is not one of his best, to be honest, but the lesson that it teaches at the end is a good one for young readers to learn. There are three things of note in this tale. First off is the odd way that the Zentorians speak and the fact that the Legionnaires’ translation plugs have trouble with it. Second is that this is the first Legion story with a very young Mike Nasser’s art gracing its pages. He would return to the pages of Legion comics several times, and would do outstanding work on the World’s Finest title featuring Black Canary and Green Arrow. Finally, this story is the first time that the Legion’s translator earplugs are specifically mentioned.

Final Notes:
This is the first issue of the title to have the masthead read “Superboy and the Legion of Super-Heroes” rather than “starring” in it, though the legalese still notes that the comic is still legally registered as just “Superboy”... The title of the lead story ("This Legionnaire Is Condemned!") turned out to be sadly ironic, as this adventure was Tyroc's last appearance (in action) for three years. He would reappear in Legion of Super-Heroes Vol 2 #263, only to be written out of the series completely... Although the Roll Call on the lead story lists both Star Boy and Cosmic Boy, neither of them appear in this story. Mon-El appears only in the first scene... A Black Science Police officer is shown in the lead story for the first time in Legion history. Likewise, Black citizens of Metropolis are also shown. After nearly 20 years of publication, the future is revealed to be multi-cultural after all... In the back-up story, Questar never reappeared again in Legion continuity... This is the last issue of Legion of Super-Heroes written by Cary Bates, and the first issue drawn by Mike Nasser and Bob Layton.


Next Issue: Superboy and the Legion of Super-Heroes Vol 1 #223
Collapse