Today's Legion of Super-Heroes classic re-read involves the return of an enemy who hasn't been seen in some time... The Time Trapper! 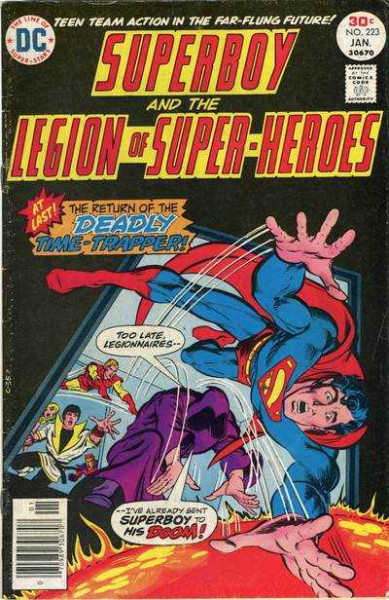 Synopsis:
On Earth, Legionnaires Lightning Lad, Shadow Lass, Princess Projectra, Star Boy, Karate Kid, Superboy, Sun Boy, Chameleon Boy and Saturn Girl prepare to rush off to attempt to deal with a rip in the fabric of space that threatens to annihilate this sector of the galaxy. However, the latter five Legionnaires are suddenly trapped in an invisible force-field. They can’t fly out or exit the barrier at all, and Saturn Girl’s thoughts can’t penetrate the barrier to call for help. Superboy wraps the other four in his cape and attempts to travel back to the past to before the barrier was present to escape it. Instead, they slam into a wall in time and then move through the temporal limbo to arrive in the Time Trapper’s lair some 3.74 days in the future. The Time Trapper shows them the galaxy and the remaining Legionnaires near Schubert’s Planetoid, attempting to seal the fissure in the fabric of space which threatens to open the universe onto an anti-matter universe. This will consume a large portion of both in a anti-matter implosion. The Legionnaires watch in horror as the universe explodes, killing their four fellow Legionnaires, and wiping out Earth and most of the Milky Way in the process! However, the Time Trapper tells Superboy and the others that this is none of his concern. The Time Trapper explains that from every point in time there are many possible futures. His omni-computer has revealed to him that in order to rule the universe, these five Legionnaires have to die. And he has also learned that if he does not kill them, he himself will die. He does something, and splits the Legionnaires up so that he can fight them individually.

Saturn Girl suddenly finds herself alone fighting the Time Trapper in a chamber of some sort. Before he seals his mind against her, she learns they are in another dimension where time is stopped or frozen in some way. The Time Trapper suddenly stops, as if stunned, but then recovers and rushes Saturn Girl, grabbing her by the throat only she is suddenly switched out and is Karate Kid being grabbed by the throat...

Meanwhile, somewhere else, Pulsar Stargrave and his lackeys, Holdur and Quicksand, are watching the battle unfold. Holdur says he thinks the Time Trapper is magnificent, but when asked, Quicksand says that Holdur is a fool, the Time Trapper is a winner, but he talks too much.

Meanwhile, Holdur praises the tactics of the Time Trapper, who is reminded by Pulsar Stargrave that he could crush both him and the Legion at his leisure.

Sun Boy presses his attack against the Time Trapper, unleashing massive amounts of fire and heat against the villain. The Time Trapper walks right through the blasting fiery energies and upon reaching Sun Boy punches him and he is suddenly switched out with Superboy...

Superboy recovers and lands a haymaker of a punch that actually staggers the Time Trapper, who says he’ll make him regret that after hurting him. He shows Superboy a warp-door leading directly to the core of a red sun, and says he’s going to hurl the Boy of Steel through it! The Trapper puts Superboy in a chokehold first, and it is then that Saturn Girl is able to communicate with him. She explains that the Time Trapper has somehow split them up to battle them individually in this dimension where time is frozen and everything happens literally simultaneously. They realize that the Time Trapper is drawing on a source of energy and when Superboy shows her his photographic memory of fighting the Time Trapper, Saturn Girl realizes it’s the hourglass at the Time Trapper’s waist! Superboy shatters the hourglass with a potent blow, and the tidal wave of temporal energy bursts free.

The four Legionnaires find themselves back together, but there’s no sign of Superboy right away. Superboy reappears, clutching a fragment of the Time Trapper’s cloak. He tells the other four that he tried to save the Time Trapper when they were both being sucked into the warp-door. However, he could not and barely pulled himself free. The five Legionnaires suddenly are back where they started, about to head off with Lightning Lad and the others to fight the fissure. During their trip aboard the Legion cruiser, Superboy tells Saturn Girl that he doesn’t understand the heavy temporal physics involved in what just happened and why he’s boning up and re-reading the technical article on the subject written by Brainiac 5 in the Legion manual. This story continues in the next issue.

Commentary:
This is one of the best stories featuring the Legion of Super-Heroes from this time period in their history (no pun intended). It is also one of the most fun stories ever in so many ways. The basic premise of the story is quite good, a group of Legionnaires rushing to avert a potentially galactic disaster. When the five Legionaires (Superboy, Karate Kid, Sun Boy, Saturn Girl and Chameleon Boy) are caught behind the invisible barrier, the focus of the story shifts in a neat twist, and when the Time Trapper is revealed...! Back in the Adventure Comics Vol 1 days, the Time Trapper always seemed meant to be a major foe who never really got the story that he deserved in terms of major, temporal plotting, but here... it’s just fabulous. This is the Time Trapper’s first appearance since Adventure Comics Vol 1 #338, and he/it comes across as a truly malevolent, powerful force. This time out, there is a decent rationale for why he is attacking the Legion (which never seemed to exist back in the stories from the 1960s), and he comes across as quite powerful here. That said, he’s not portrayed as being overly powerful, since his power this time out comes from the energy being harnessed (I guess) through the hourglass at his waist. He is, to put it bluntly, a major threat in the story, but there’s other stuff going on here, methinks (see below). He’s not the one behind the spacial rift that the Legionnaires were going to deal with at the beginning of thd story, and that’s telling in a way here.

The Time Trapper’s fighting the Legionnaires individually, but simultaneously, was a brilliant piece of plotting. More important, however, was the visuals for the fight scenes with the Trapper, and Mike Grell did a magnificent job of the temporal limbo scenes and the fight choreography which was tailored to each of the five Legionnaires involved. Granted, it was confusing but perhaps that was part of the plan and it certainly worked as I was kept guessing until Saturn Girl’s explanation/revelation near the end. While I know that Karate Kid was Jim Shooter’s favourite Legionnaire, part of me wonders if the other four headliners in the story were among them as well. Other than Superboy, they don’t seem to be that important as members (if the Time Trapper doesn’t kill them, he dies? Really?), but the focus on these four Legionnaires was interesting, to say the least. The part of the story that didn’t make any sense to me was the sequences with Pulsar Stargrave and his two henchmen, Holdur and Quicksand, watching the Time Trapper’s plot unfolding. A television/televisor monitor that can pick up temporal limbo? I don’t think so. To make matters worse, the connection between Pulsar Stargrave and the Time Trapper is tenuous at best and not that believable, and for that reason the “second part” of the story in Superboy and the Legion of Super-Heroes Vol 1 #224 is not really a part of this tale, in my opinion. See the thoughts on the next issue of the comics.

Finally, it should be noted that this is the last issue of Superboy and the Legion of Super-Heroes edited by Murray Boltinoff. By agreeing to put the Legion of Super-Heroes back-up feature in the pages of Superboy Vol 1, Boltinoff did more than any creator to save the characters from extinction. Mind you, it didn't hurt that he also hired Cary Bates, Dave Cockrum, Mike Grell, and Jim Shooter to work on the stories, either! :)

Final Notes:
The Legion of Super-Heroes last encountered the Time Trapper way back in Adventure Comics Vol 1 #338... On the cover of the issue, Saturn Girl (what one can see of her) appears to be naked... Karate Kid's collar is consistently mis-coloured as white throughout the story... There is no explanation as to why Karate Kid is present in this story, instead of in the 20th Century where he’s currently engaged in a huge fight with Commander Blud (see Karate Kid Vol 1 #5-6)... The letter column of the issue also announced that a Justice League of America team-up with the Legion of Super-Heroes will be happening “next summer”, in answer to a query by David Pauley... This is the last issue of Superboy and the Legion of Super-Heroes edited by Murray Boltinoff, who was responsible for bringing the Legion back to publishing prominence after Mort Weisinger tossed them out of Adventure Comics.