Time for another Legion of Super-Heroes classic comics re-read, this time out another issue of Karate Kid's own title. 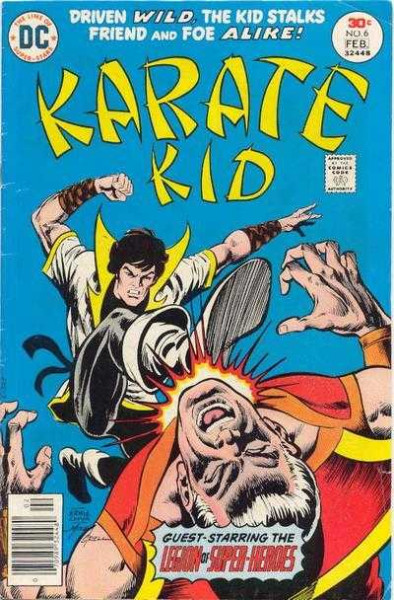 Opposition:
Commander Blud and his soldiers

Synopsis:
Continued from the previous issue. With a quick, text recap of what occurred in the previous issue, the action continues from where it left off. The stark-raving mad Karate Kid has broken free from Commander Blud's mind-torture machine. He is about to kill Blud when four members of the Legion of Super-Heroes suddenly arrive. Cosmic Boy blasts Karate Kid away from Blud, saving his life, repelling the metal rings in his wristbands, but the Kid is still under the influence of the torture machine. While Cosmic Boy, Sun Boy and Star Boy try to calm their friend down and Princess Projectra just stands there looking distraught, Commander Blud takes the opportunity to slip away through a secret door in the confusion. Cosmic Boy finally uses a ku-jiu nerve pinch on Karate Kid, stunning him. He then orders Sun Boy to help him tie-up the henchmen and for Star Boy to free the woman who is chained here (Iris Jacobs) but they ignore his orders and each does the reverse job of what was assigned them. When Iris is freed, she wants to go to Val’s assistance as he may need her, but is shocked to see Princess Projectra cradling Karate Kid in her arms; Iris runs off before the Legionnaires can stop her.
After Karate Kid wakes up, senses restored, Cosmic Boy explains to him that they arrived because their time-scanners detected someone trying to tamper with the time stream. Karate Kid is angry that the Legion interfered, because they allowed the person they’re seeking, Commander Blud, to escape. Karate Kid angrily storms off, refusing to work with them in capturing Commander Blud, though he doesn’t tell them to leave the 20th Century at this point. Both Princess Projectra and Cosmic Boy agree that something strange is going on with him, that there are deeper reasons for his coming to the 20th Century than he’s told them, but they can't worry about Karate Kid while Commander Blud is still free and potentially tampering with the time stream.

Meanwhile, in Karate Kid’s apartment, his landlady enters the place to do some cleaning up. She activates the mysterious monitor device in his room, thinking that it is a television set. She sees an image of what appear to be castle ramparts, and then a voice demands to know why she has activated the monitor. The voice then replies that she has seen too much, and blasts her with a bolt of electricity.

Elsewhere, Karate Kid is feeling sorry for himself and trying to figure out a way to find Commander Blud when a mechanical eagle swoops down and carries him off. It drops him into the filth-muddled Hudson River, but a gravity-defying beam grabs him, parts the waters, and delivers him into an underwater domed area. Instantly, large robotic guards declare him their prisoner, but Karate Kid makes quick work of them, but is stopped when Commander Blud arrives. He tells the Kid that he expected no less of him in defeating his cyborg corps. He demands that Karate Kid tell him what he wants to know about the future conflicts, but when the Kid refuses, Blud shows him the Legionnaires - now captive behind a force field. Blud tells him that the force field prevents them from using their powers, but it also is capable of dissipating their mass, and proceeds to do so, the four Legionnaires starting to come apart. In a moment of seeming weakness, Karate Kid rushes forward to Princess Projectra, apparently distraught. As she continues to dissipate along with the other Legionnaires, Karate Kid manages to pull himself together and then reluctantly agrees to tell Commander Blud about World War III. At that moment, the dome protecting Blud's underwater hideout cracks and river water begins to flood in. With Blud distracted, Karate Kid rushes him and destroys his remote control device, freeing the Legionnaires. Karate Kid tells Blud that he fell for a distraction, Projectra having cast an illusion - her mental powers unaffected by the force field - of the dome cracking to distract him. Commander Blud orders his cyborg troops to attack. While Sun Boy, Cosmic Boy and Star Boy deal with his troops, Karate Kid chases after an escaping Blud. Afraid that Blud will escape in a mini-sub unless he does something drastic, the Kid kicks the wall of the dome, bursting it for real. He then rides the wave forward to Commander Blud and knocks him out. As Karate Kid heads home, dejected and alone, he runs into Iris. She apologizes to him for running out on him earlier, and they start to chat, as friends, until they reach his apartment. Police cars, a cordon, and an ambulance all sit outside his apartment building. As they approach, the police then arrest Karate Kid for murdering his landlady!

Commentary:
This story is, when all is said and done, a disappointing second half to the tale told in the first part of the story (Karate Kid Vol 1 #5). The story continues with Val having gone somewhat mad due to being tortured in Commander Blud’s device, but that is immediately dealt with by the arrival of the Legion of Super-Heroes, headed up by Cosmic Boy. Their arrival makes sense, given what they tell Karate Kid is going on, but... Arguably Princess Projectra is the most powerful Legionnaire in this group, but she does absolutely nothing in the opening sequence. I have never been a fan of super-heroines being reactive rather than proactive, and this sequence and the issue are a great example of how not to write the Legion of Super-Heroes. Add to that the disobedience of Sun Boy and Star Boy when they are told to tie up the henchmen and free Iris, respectively, and they switch tasks. Obviously, both writer David Michelinie and editor Denny O'Neil don't know enough Legion trivia to write this stuff. For those of us who do, this is a rather jarring moment, to be honest.

The artwork by Ric Estrada and Joe Staton is middling to functional in this issue. One of my favourite pieces of their work is the bit when Iris is freed and sees Projectra cradling Karate Kid in her arms. It’s a well-drawn scene, with a full page width panel of Projectra and Karate Kid and then some sombre colouring and a lonely point of view of Iris for the last two panels. Great stuff. On the other hand, the fight scene with Commander Blud’s cyborg corps near the final part of the story left me...cold. I understand there’s probably a mandate about how many fight scenes have to be in the issue, but it just didn’t feel necessary. I also found Ric Estrada’s tendency to pull waaaaay back for certain scenes annoying, to say the least. It makes sense in the sequence where Iris Jacobs is walking off from Cosmic Boy, but the other examples (notably the combat ones) just seem wrong, and perhaps lazy. A scene that bothered me to some extent is the one where the Legionnaires know that Val is acting strangely, but are more concerned about Commander Blud’s escaping. So far, we haven’t seen Blud do any tampering with the time stream at all. How is asking a person from the future for secrets about that future “tampering” in and of itself? To be honest, while I was pleased to see the Legionnaires show up in the role of the cavalry, it was just too...convenient. The most interesting scene in the story, to be honest, was the one with Mrs. Geichman, Karate Kid’s landlady, and the monitor device. That said, the murder of the landlady came out of left field, to be honest, and I’m not sure how I feel about that. That said, it certainly develops that plot somewhat. I was rather put off by the scene of Blud telling Karate Kid that he has the Legionnaires in a stasis field preventing their powers from harming him. He is about to press a button on a remote control device to dissipate them, unless Karate Kid tells him the secrets of the future. First of all, how does Commander Blud even know what the Legionnaires' powers are in order to come up with some technology to stifle them? Cosmic Boy's powers are biological in nature (he was born with them) so it seems like they would be impossible to stop. Likewise, Princess Projectra's powers are magical in nature, and as the reader saw Blud doesn't succeed in stopping them. And finally, but most damaging, is the fact that the Legionnaires were defeated and captured off screen by a guy with no powers! And, if these four people are friends of Karate Kid, who is from the future, is it assuming too much to think that these four people might also be from the future? Especially if you overheard them talking about the future before you escaped from them? So why didn’t Blud try to extort these four people, and leave Karate Kid out of it?

The end of the story redeems itself somewhat, with the accusation of the murder of Mrs. Geichman laid against Karate Kid, and the story undergoing a change in both plot and theme. But there are still questions to be answered: Who is at the other end of the monitor? What is Karate Kid really doing in the 20th Century? And, finally, where did Commander Blud get the cyborg robots and the force field/matter dissipator technology from? Hopefully, we’ll get some answers to those as well.

Final Notes:
There is no letterer or colourist credited for this story… Several pages of the story have reversed colour plates, making Princess Projectra's red uniform purple and Karate Kid's yellow collar blue… The Legionnaires' appearance chronologically falls between Superboy starring the Legion of Super-Heroes Vol 1 #220 (Slave Makers) and #221 (the debut of Grimbor)… On page 4, in the second panel, Sun Boy answers to the name “Thom”. This is odd, since his name is actually Dirk Morgna, but his friend in the issue, Star Boy, is Thom Kallor.


Next Issue: Superboy and the Legion of Super-Heroes Vol 1 #224
Collapse