Time for today's Legion of Super-Heroes classic re-reads. This time out, a story with so much promise but which never came through in its sequels for the fans. 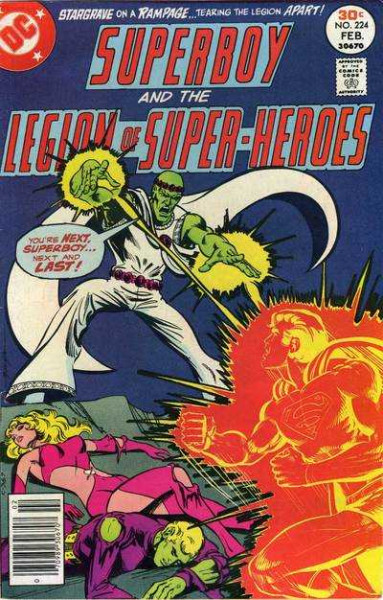 Synopsis:
On planetoid P88-01, the Legionnaires are in the process of preparing to mend the fissure in space when Holdur and Quicksand appear on the scene. Holdur grabs Superboy and even the Boy of Steel can’t break his grip, and he’s too fast for Lightning Lad to hit him with a bolt of energy. As Sun Boy starts to try to attack Holdur, Quicksand turns the ground to liquid around the nine Legionnaires minus Superboy, and once they sink, solidifies it. Before the Legionnaires can free themselves, Pulsar Stargrave appears atop a craggy rock and with a wave of his hand seals the fissure in space. The Legionnaires manage to free themselves, but before they can act, Stargrave teleports them all to his “home.” The Legionnaires demand answers, but Stargrave says he will not be interrogated and imprisons the Legionnaires in a force field so they cannot move and cannot speak. He admits that he opened the fissure in space so as to lure the Legion out to his part of the universe. Stargrave explains that he is looking for an ally to battle his enemy. It was he who freed the Time Trapper from the time-stasis field in which the Legion had imprisoned him, to test him as a possibly ally, but when the Trapper was defeated by the Legion, he decided to use the Legion instead.

Superboy has had enough, and with a herculean effort breaks the rest of the Legionnaires loose. Holdur attacks Princess Projectra, but she stops him with an illusion of Mordru, the hated enemy of Stargrave. Quicksand dissolves the ceiling on Sun Boy, Chameleon Boy and Projectra, and then turns it into a solid column. Saturn Girl and Karate Kid work together to free them, while Star Boy increases Quicksand’s mass, sending her into the ground. Holdur attacks Brainiac 5, but can’t penetrate his force-shield. Lightning Lad’s electrical bolts prove useless against Stargrave. When Superboy attacks Stargrave, Stargrave hits him so hard that he goes clean through the ceiling and out of the atmosphere. This stops the fighting, and the Boy of Steel returns in a furious mood. Batting Holdur aside, Superboy moves towards Stargrave. Stargrave expands to giant size, glowing with the energy of a star, and when Superboy attacks he is knocked down and unconscious by red sun radiation. The rest of the Legionnaires attack Stargrave, but with no effect. With a wave of his hand, Stargrave renders them all unconscious, except for Brainiac 5. Alone with Brainiac 5, Stargrave tells him of his origins: Stargrave was a mortal scientist investigating an unusual stellar phenomenon when his life support system failed; he put himself into suspended animation until he could be found. He was found by a race of aliens who thought he was dead, so they "buried" him in their fashion by teleporting his body into a star that was going nova. As it became a pulsar, he somehow merged with the exploding plasma, becoming Pulsar Stargrave. He was able to reform himself in the body he currently wears. Brainiac 5 says that he looks much as he did before.

Some time later, back at Legion Headquarters, Brainiac 5 tells the recovered Legionnaires that Stargrave is after everything... he wants total control of the universe. Brainiac 5 thinks the Legion should help him, and then tells the shocked and horrified Legionnaires why they should do so and what the alternative is. Some time later, as Brainiac 5 wanders down a hall wondering if he’s made the right decision, Stargrave appears next to him. He tells Stargrave that he convinced the Legion to fight on his side against the ultimate enemy, but if they win the Legion will turn against him and try to stop him achieving his plans. As Superboy listens in from around the corner, Brainiac 5 says he accepts the mission to Zerox and he will leave immediately. And Brainiac 5 recognizes Stargrave as his (altered) father... and the story continues in the next issue...

Commentary:
...and with that, Jim Shooter and Mike Grell said good-bye to The Legion. (More on this below.) That, in itself, makes it very difficult to put thoughts down about this issue. This is so obviously the beginning of a multi-part story. Pulsar Stargrave, as seen in this tale, is a fascinating new character with terrific potential. His abilities, from freeing the Time Trapper from the time stasis prison the Legion left him in (way back in Adventure Comics Vol 1 #338) to first opening and then closing the space fissure, mark him as a powerful entity indeed, though his true motives are unclear here. Is he truly Brainiac 5’s father, and if he isn’t, why is he claiming to be? Why is he going after Mordru, and what does that master sorcerer have to do with matters at hand? So many questions that needed answering, and while we got them from Gerry Conway when he got handed the plot, it would have been more satisfying I suspect to have gotten them from Jim Shooter’s original story. Stargrave’s two minions, Holdur and Quicksand, are both interesting characters in and of themselves, but I can’t help wonder about their relationship and status with Stargrave. Holdur is the more banal of the two, having super-strength, good combat abilities, and speed, but he is very much a physical combatant and likes to attack others (as the story showed). Quicksand, on the other hand, has a unique power in the ability to turn things to liquid and then solidify them again. She is also much wiser and more thoughtful than Holdur, and seems to hold a higher position with Stargrave. In many ways, I wish we had seen a lot more of her in the Legion comics.

The writing in this story is top notch, with Shooter giving us an efficiently written and paced tale, with lots of questions left for future stories. The dynamics of the story are brought to full life by Mike Grell, whose version of Holdur is somewhat creepy, but interesting. His full-page piece of Superboy getting literally knocked out of the world, is just fabulous, and there are plenty of other evocative pieces. The illustrations of Stargrave in pure power mode are just stark and jump off the page at the reader, and I sorely missed him after this issue for several years.

And yes, getting back to my point at the beginning of these thoughts, this is the last issue for both Shooter and Grell. My impression is that neither of the two knew that this would be their last issue, since the story closes on such a great cliffhanger. Shooter, especially, must have had an additional story in mind when he originally wrote this script. After all, he had the Time Trapper in the first chapter, Pulsar Stargrave in this chapter, and presumably Mordru in the third chapter, I would guess. That said, to the best of my knowledge, he has never revealed what he was going to do in the third part of the story. I will say that what we ended up with was a lacklustre conclusion that absolutely did not live up to the drama promised in this issue’s cliffhanger ending.

Oh, and for the record, the story does *not* continue in the next issue!


Next Issue: Superboy and the Legion of Super-Heroes Vol 1 #225
Collapse