Time for another Legion of Super-Heroes classic re-read, this time out another issue of the Karate Kid series. 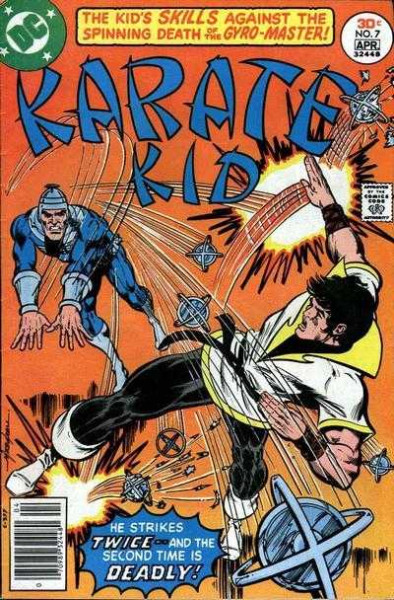 Opposition:
The Gyro-Master and his henchmen

Synopsis:
The story begins as Karate Kid is being carted off to jail on suspicion of having murdered his landlady, Mrs. Geichman. The city block the police car is travelling on is suddenly ripped open by a huge drilling device called the Spin-Borer. The villain of the piece, the Gyro-Master, emerges from the vehicle with his men. He plans to break into the Metropolitan Museum. When the police around the area try to capture him, the villains starts to spin (like a gyro) and sends them tumbling like pins. His underlings use a series of gyro-guns that turn the policemen into spinning tops. Karate Kid, deciding to help the police despite the way he’s been treated, breaks free from his handcuffs and attacks the Gyro-Master’s minions dealing with two of them easily enough. He then heads into the museum.

Inside the Metropolitan Museum, Gyro-Master goes to steal the Milan Gyro. He recalls (for the reader’s benefit) his origins: He was a simple industrial spy, Elroy Soames, until one night he fell into a huge cyclotron, and the super-plastic mixture that was spinning inside it was absorbed into his skin. Discovering what he could do with his new abilities, he learned to control them and then used the monies made from his early capers to create some useful little devices. Karate Kid arrives on the scene, and attacks the villain. However, objects that are spinning fast enough tend to bounce back and that’s what happens, the villain knocking him down hard. As the Gyro-Master escapes he throws down some mini-gyros that causes Karate Kid to lose his footing as he chases after the villain. When the police and Iris rush in, the Gyro-Master decides to retreat, spinning into another room and disappearing. The museum curator explains to the police that the Milan Gyro was designed by Leonardo DaVinci and was on loan from the Italian government; it is priceless and irreplaceable and was due to be shipped backed to Italy the next day. If the display is not complete, the diplomatic repercussions could be horrendous. Karate Kid and Iris use the museum curator’s monologue to escape.

Elsewhere, in a complete change of scene, we witness the daily, happy life of a man named Benjamin Day. he receives a phone call and proceeds to go upstairs in his house to grab the tools of his trade - and go out and kill someone!

Meanwhile, Karate Kid and Iris return to Val’s apartment building. Karate Kid asks Iris to keep the posted police guard busy so that he can sneak back into his apartment. Once in the apartment, Karate Kid confronts the individual on the monitor globe, as he knows it is the only thing that could have killed his landlady, Mrs. Geichman. He learns that she was prying and had to be discouraged and that she’s not dead; her life functions will return shortly and she will have no memory of the events due to a memory erasing blast. The voices from inside the apartment bring the police to investigate, Iris being unable to delay them long, and the Kid attacks them and prevents them from arresting him. When Iris sees Val knock out the policeman, he mentions the monitor globe to her. She ask him to explain a few things and wants things to slow down because they're going too fast. Her statement makes Karate Kid realize that Gyro-Master must still be in the museum.

They rush back to the Metropolitan Museum, and Karate Kid sneaks into the building through a window. Going to the room where Gyro-Master disappeared, Karate Kid shouts for him to reveal himself, which he does, having been spinning so fast that he was invisible. Knowing that defeating Karate Kid this time will be difficult, Gyro-Master drops mini-gyros on the floor whose vibrations actually animate suits of armour in the museum. Karate Kid fights the animated suits of armour, but Gyro-Master uses the distraction to unleash some tear gas that almost blinds and confuses him. The villain tosses a grappling hook through the ceiling window in order to escape. Grabbing one of the mediaeval ornaments from one of the suits of armour, the tearful Karate Kid tosses it at the rope, cutting it, causing Gyro-Master to fall to the floor. Feeling the police would arrest him rather than credit him for capturing the villain, Karate Kid makes his way out of the museum, leaving the villain for the police.

Some time later, Iris and Karate Kid are walking through Washington Square Park. In a nearby alley, Benjamin Day clicks something on his oddly embellished walking staff. With an odd glow, Benjamin Day’s gear transforms turning him into...the Hunter!

Commentary:
This is one of those stories that have been typical of the Karate Kid series, where the story has been all right, but hasn’t really excited me. While the villain of the hunter guy from the end of the issue, who might be named Pulsar, seems to be interesting, the Gyro-Master was another cookie-cutter villain with an origin provided, but not really much of a motivation. I have to wonder why DC didn’t choose to use a more established super-villain (and that pretty much holds for the entire series, not just this issue’s villain). Surely Batman and the Flash between them have enough B-list and C-list villains that could have given the Kid more of a run for his money than the Revenger, Commander Blud and now the Gyro-Master?

Rick Estrada’s artwork continues to un-impress me. A good example of this is the business right at the beginning of the story with the Spin-Borer. We know that’s what it’s called because the villain pops out of his machine, and tells the reader! The double-page spread on the Spin-Borer is off centre, and not the most dominant part of the illustration; it seems to me that either the worker on the left or Karate Kid's butt on the right are more prominent than the Spin-Borer. I don’t think I’ve ever seen any Ric Estrada un-inked pencils so I can’t be sure what his style is, but this page below looks to me to be strongly influenced by Joe Staton (who inked the issue, for the record). While I haven’t counted the number of fights in the various issues of the series so far, the number of fights in this issue seemed to be pretty low this time out. And I can’t say that I’m thrilled with these constant bits of Karate Kid fighting various police officers. Stating that your comic is about All Out Action just doesn’t work when you don’t keep up a decent rate of combat for a martial artist super-hero character, you know?

Easily the most intriguing element of this story was the Benjamin Day sub-plot and his turn into the hunter, Pulsar, or whatever his name is. Much more interesting than the actual story villain of this tale. And that’s a cool walking staff!

Final Notes:
There is no letterer or colourist credited for this story… It was revealed in the letter column for issue #9 that the villain was originally meant to be the Top. The Flash villain the Top died in The Flash Vol 1 #243 (August, 1976), however, about a year before this issue, so he couldn’t have been used as the villain here. The editor and writer of the issue collaborated to use a villain in a similar vein, and thus the Gyro-Master was born. Shame, that, as the Top would have been interesting in this story.


Next Issue: Superboy and the Legion of Super-Heroes Vol 1 #226
Collapse