Here's the entry for today's classic Legion of Super-Heroes comics re-read. The introduction of Dawnstar, and as pretty decent story to boot. 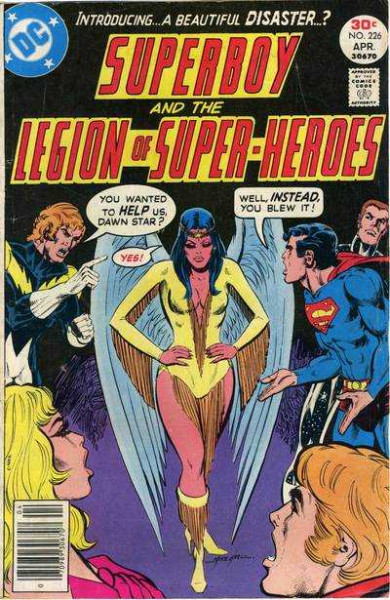 Synopsis:
At Legion HQ on Earth, Sun Boy and Star Boy chase after the Resource Raiders prisoners who have escaped their cells. The raiders are resourceful enough during their escape, but the two Legionnaires manage to recapture them before Wildfire even notices they’ve escaped. As they enter the main meeting room, the two Legionnaires learn that all Lightning Lad was able to learn from them was a set of spacial coordinates. Having plotted them, it turns out to be just an area of open space. While Saturn Girl is emphatic that Lightning Lad can plot the course, Wildfire says he knows of a way to track it. He introduces his teammates to Dawnstar, and asks her for her help in tracking the Resource Raiders. As the Legionnaires prepare to head into space, several of then complain that after two days as leader, Wildfire is treating them as the hired help. Dawnstar leads the Legion into space, and Lightning Lad is impressed by her abilities. Wildfire says that’s why he asked for her help - she’s a mutant who can hunt and track anything anywhere, even across the galaxy.

Moments later, Dawnstar leads the group to a location near the orbit of Pluto, which is the location they gave her, but there’s nothing there. However, Saturn Girl senses a convoy of ships nearby that is under attack by the Resource Raiders, in the hopes of cutting off supplies to the main guardian of the Solar System, the base on Pluto. The captives had given them the coordinates for their next raid, not their base. The Legionnaires are horrified to see the destruction wreaked by the Resource Raiders, and attack the Resource Raiders. Superboy tells Dawnstar that she’s not a Legionnaire, so that it’s not her fight, but she replies that there is evil present and would he have her ignore it? Especially when she sees the raiders killing innocent crew members. The Legionnaires are able to destroy one of the Raiders’ bubble/saucer ships, and are informed that this is the second time the Legion has interfered in their affairs. Next time, it will be a place and time of their choosing and the Legionnaires will die. The remainder of the Resource Raider ships take off. Wildfire asks Superboy to go after them, but he can’t do so as he’s helping several men to a ship before they suffocate while the rest of the Legionnaires are rescuing the injured and the wounded.

Superboy says that he can’t find any trace of the Resource Raiders; they must have used a space-warp to escape. In a petulant manner, Lightning Lad tells Dawnstar that she blew it. However, when Wildfire defends her actions, Dawnstar says she can still track the Raiders as space warps do not interfere with her powers. Dawnstar and the Legionnaires set off again, and the trail leads them back to Earth, specifically the Siberian Hydroponic Gardens. The lead proves true as the Raiders’ one-man (drone) fighters attack. They learn that the true purpose of the Resource Raiders is to wipe the the star system clean of resources, and then when they need them to live offer them back to the population, who will live as their slaves. Dawnstar easily avoids the attack, and leads Superboy and Sun Boy to an entrance near some storage vats. Not fooled by an optical illusion, she leads the two Legionnaires straight to the central complex, where they attack the Brain of the Resource Raiders amidst a series bio-electric consoles. Superboy and Sun Boy destroy everything, separating the raiders’ inhuman master from his controls. With matters wrapped up, the Legionnaires apologize to Dawnstar for being so rude to her, but she hopes to get another chance to work with them as the work was more rewarding than her usual tasks of guiding hunters to snare helpless beasts. Wildfire offers Dawnstar full Legion membership.

Commentary:
This is the second part of the story dealing with the menace (though I use that term loosely) of the Resource Raiders, and held a lot of promise. The story delivers for the most part, but suffers from poor writing and indifferent art. This is Paul Levitz’s second issue as Legion writer and it shows. The Legionnaires come off as a bunch of spoiled brats, bad-mouthing Wildfire behind his back for bringing in the winged tracker and being downright rude to Dawnstar herself. Aside from the characterization, however, it made no sense to have a dozen Legionnaires at the beginning of the story, but only five of them go on the mission to hunt down the Resource Raiders. However, the real problem for me was the confusing end sequence in the lair of the giant Brain. What exactly happened in the last page of the battle with the Brain? Fortunately for all Legion fans, author Levitz’s writing, as mentioned in the previous issues comments, will get better. Much better.

The artwork in the story is frustrating and to be perfectly honest, a bit of a low point for me personally. When paired with Bob Wiacek’s inks last issue, James Sherman’s pencils were a delight to look at. Here, with Jack Abel doing the inking, the artwork is somewhat uniform and standard in look and feel, somewhat dull and unexciting. The artwork is meant to be dynamic, and the outer space fight sequences give a bit of that, but don’t quite reach their goal. In the sequence where Dawnstar sees through the optical illusion that stops both Superboy and Sun Boy, the area is meant to be a maze but you can’t tell that because Jack Abel’s inking lines are heavy and thick. Penciller James Sherman’s beautiful lines are pretty much stifled out of existence. A shame, really.

That said, this issue introduces Dawnstar, soon to be the newest Legionnaire. Apparently of American Indian descent with natural, stunning wings, she’s an interesting character and her power to track anything, anywhere, even through space warps is intriguing. She also seems to be able to fly very fast in space, even outpacing a Legion cruiser, and doesn’t seem to require protection from the vacuum. Mike Grell’s design of Dawnstar is very nice, and James Sherman does justice to the character with his lines and there is a definite sleekness of form to the character, suitable of course for travelling through air or the vacuum of space. She will be joining the Legion, of course, but her story is just beginning here and she handles the rudeness and insults of the other Legionnaires well. She does come across as something of a mercenary, so it’ll be interesting to see what her real motive for joining the Legion is.


The issue’s second story is this one…

Synopsis:
Superboy and several other Legionnaires are reviewing the holotape of Brainiac 5's recent solo mission to Zerox, the Sorcerer’s World...

Brainiac 5 has gone to the Sorcerers' World in order to steal the mystic Star Stone from Mordru's treasures house, on behalf of Pulsar Stargrave. The reader gets a quick bit of background about the events surrounding the Legion’s meeting Stargrave and what occurred in that story. Stargrave had told Brainiac 5 that he is the Legionnaire's father, then had asked him to steal the Star Stone from Mordru to help in his battle against the wizard. Brainiac 5 quickly defeats one guard, who attempts to attack him with a lightning power bolt that Brainiac 5’s force-shield counters. Entering the treasure house itself, even the cautious Brainiac 5 is unprepared for the furniture that animates, though he manages to deal with that through force of will. He then fights a docile cat that transforms into a mystical black panther, and then turns on his force-shield and leaves it on. He is then confronted by an evil, mirror image of himself, but is able to overcome that foe as well by disbelieving that he could really have that kind of evil in his soul. Finally, Brainiac 5 confronts the Star Stone itself, which tells Brainiac 5 that it had five defenses. Its last defence is: the Truth. The Star Stone informs Brainiac 5 that Pulsar Stargrave is not his father - he is actually the original Brainiac, catapulted into the 30th Century, and is determined to make it his own. And that he has used Brainiac 5 for his own ends. Brainiac 5 believes the Star Stone, and decides to hunt down Stargrave alias Brainiac, and kill him.

When the tape has concluded, Element Lad tells the other Legionnaires present that they must find Pulsar Stargrave before Brainiac 5 makes good his threat, or Brainiac 5 will be expelled from the Legion for murder! The story continues in the next issue.

Commentary:
The back-up story for this issue is, to all intents and purposes, a Brainiac 5 solo story. It “continues” the plot that began in Superboy and the Legion of Super-Heroes Vol 1 #224, that introduced Pulsar Stargrave, but is a poor story in so many ways. The story was obviously thrown together in a hurry after Jim Shooter left DC Comics for Marvel, and editor Denny O’Neil needed to somehow continue and/or resolve the Pulsar Stargrave storyline. There are some nice moments in the story, notably the Star Stone’s unique defenses that it uses to protect itself from Brainiac 5, and Brainy’s referencing his learning some combat skills through the teachings of Val Armorr (aka Karate Kid). My biggest gripe with the story is Element Lad’s statement at the end that if Brainiac 5 kills Stargrave he’ll be expelled from the Legion for murder. Stargrave is an android at best, and as was established in Adventure Comics Vol 1 #342, it would not be “murder” if Brainiac 5 “kills” Stargrave.

The artwork on the story is not all that good, to be honest, and Jack Abel manages to take Mike Nasser’s usually exciting and dynamic artwork and render it dull in the extreme. This is not helped by the fact that on the first page of the story Superboy is mis-coloured as Brainiac 5 or that on the last page two unrecognizable Legionnaires might be Star Boy and Princess Projectra, but I actually can’t tell. That said, I suspect all of this can be accounted for by the deadline crunch that the story must have had, but that doesn’t make it excusable.

Final Notes:
In the lead story, Dawnstar is credited as having been designed by Mike Grell… Dawnstar is mentioned in the lead story as being 16 years old… Dawnstar makes her debut in the lead story, and shortly thereafter joins the Legion… In the back-up story, where are the White Witch and the other magicians of the planet Zerox? For that matter, where is Mordru?… The letter column includes another comment about the upcoming issue: "Next issue, Pulsar Stargrave, and after that, the death of a Legionnaire!"


Next Issue: Superboy and the Legion of Super-Heroes Vol 1 #227

Tonight's game session with the Friday night group has been cancelled.

This weekend is the long, Thanksgiving Day weekend here in Canada, so as a result the various players from the Friday gaming group are off doing their own turkey- and family-related things. As a result, no game.

This gives me another couple of weeks to figure what I want to run and play, though the idea was to do some Coriolis - The Third Horizon gaming again soon. That said, the Friday night crew told me that if I want to, I can run another session of Mermaid Adventures, as they had such a good time with it the other week.

Anyway, this means I've got time to figure out what to do.
Collapse