Gaming for this afternoon with the Sunday players was scheduled to take place.

However, this is the long Thanksgiving weekend here in Canada, so gaming for today is off as one of my players has other things that need doing today.

As a result, today's game session of the John Carter of Mars Roleplaying Game campaign is off. I can't say that I'm sad not to be gaming today.

This will give me a chance today to go out and cast my vote in the Canadian federal election at the advanced polling station near me, head out and shop for some water glasses, a toilet brush, and some other stuff, and have a good meal out today at Dunn's.

This evening, going to relax with my feet up.

Time for today's Legion of Super-Heroes classic re-read, this time out another of Karate Kid's tales from his spinoff comic. 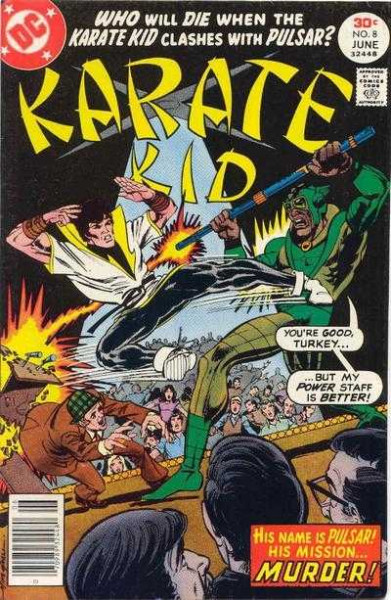 Synopsis:
In Washington Square Park, the villain known as Pulsar uses his energy staff to destroy part of the Washington Square monument, warning people he’s got a job to do and to stay out of his way. This gets the attention of Eddie “The Lip” Vacarro, Pulsar’s intended target, as well as that of Karate Kid, as he’s walking through the park with Iris trying to avoid New York’s finest. Karate Kid interrupts Pulsar before he can kill Eddie, and the two fight with the Kid seeming to get the advantage. Pulsar lives up to his name, blasting Karate Kid with his staff weapon, and goes after the fleeing Eddie. Using his head, Pulsar fires a blast that spooks a carriage horse that then proceeds to run Eddie over, killing him. Iris goes to see if Val is alright, but Karate Kid ignores her and takes off after Pulsar. However, as Pulsar rounds a corner into a deserted side street, he uses his power rod to transform back into businessman Benjamin Day. Karate Kid rushes past him, and says that Pulsar can’t have just disappeared like that. The police arrive on the scene of the crime at that moment, and take Karate Kid in again for the murder of Mrs. Geichman and now another victim as well.

Meanwhile, at the city morgue, Emily Geichman isn't dead after all, and comes back to life while two morgue technicians discuss the high rates of rent in the city and how sometimes they wish they could kill their landlords. Elsewhere, and some time later, in the office of Police Commissioner Banner, the latter is reading the trussed up Karate Kid the riot act when an underling comes in with a paper report from the morgue that Mrs. Geichman is alive and thus Karate Kid did not murder her. The frustrated Police Chief Banner is forced to release Karate Kid.

Elsewhere, the weary Benjamin Day returns to his suburban home in Long Island, but his wife tells him that a business associate named Kade is waiting for him. Benjamin Day is furious with Kade, but Kade is there to make Pulsar take on another "assignment." The reader learns about their relationship, that Benjamin Day is secretly Pulsar, he’s the Mob's hired assassin, and Kade is his superior or contact. Kade inquires if Benjamin no longer cares if Kade hits the switch on what appears to be a trigger device, and reluctantly Benjamin caves in.

Later that night, Commissioner Banner is addressing the Police Officers Convention at Madison Square Garden. The focus of his speech targets assassins like Pulsar and vigilantes like Karate Kid. Pulsar interrupts the festivities, blasting the podium to pieces, and we see that the Commissioner is his next target. At Karate Kid's apartment, Mrs. Geichman has come home. She tells Val and Iris about how his television almost killed her; he promises to her that he will have it looked at. She swears off TV, so turns on the radio instead. The three of them then hear the news about Pulsar holding Banner hostage at Madison Square Garden. Karate Kid rushes off, Mrs. Geichman saying that she worries about Val so. And the insurance problems if he should hurt himself, leaving the apartment through the window as he’s so prone to doing. At Madison Square Garden, the police are having trouble breaking through the doors to the room where Pulsar is holding Banner. However, Karate Kid shows up and bursts through using his combat-oriented feet. The Kid fights Pulsar in what is a re-match where the villain seems to have the advantage to start with, and where the Kid is clearly trying not to kill Pulsar. This allows Commissioner Banner to grab his gun. When Pulsar turns on him and destroys the gun with his force staff, Karate Kid attacks with his feet again, but has an unexpected side effect: his blow sends Pulsar careening into the lighting panel control board behind him, almost electrocuting him. Rather than let Pulsar die, Karate Kid kicks him clear of it. The recovering Pulsar is surprised that the Kid saved him, and apologizes for what he does next. Pulsar kicks the Kid in the groin and flips him over him, and then takes off and escapes down the hallway. Reaching a nearby exit, Karate Kid is surprised again that Pulsar has escaped once more. However, he notices the same man that he saw at Washington Park (Benjamin Day) in the crowd, and thinks that perhaps there’s a connection to Pulsar there. However, before he can follow up on his suspicions, he is approached by the Police Commissioner. Banner reluctantly thanks Karate Kid for saving his life and the two shake hands in a very (cheesy, to me) moment.

When Karate Kid returns to his apartment, Iris meets him outside the front door and in his apartment ”confronts" him with a kiss. She’s pretty clear that she wants to try to win the Kid away from Princess Projectra...who just so happens to be standing in his apartment, waiting for him! The story continues next issue.

Commentary:
This issue of Karate Kid’s own series is one that’s interesting in a few regards, but is lacking in others. The villain of this story, Pulsar, is one of the better ones seen through the series so far, part of the reason being that Benjamin Day (his alter-ego) is an interesting character with hidden motivations for doing what he does. One thing of note in the story is that for someone who works as a hitman and assassin, it would make more sense and be more efficient for Pulsar to get in and out of the scene of one’s hit without drawing attention to himself. The scene in Washington Park doesn’t make a lot of sense to me from that perspective.

Several things truly bothered me in the issue. The scene at the morgue with Mrs. Geichman and the scene back in Commissioner Banner’s office are quite disappointing and annoyed me no end. The morticians look too cartoony, and their reactions to Mrs. Geichman still being alive are played for laughs. And are we really expected to believe that the Police Commissioner of New York City is having a temper tantrum because he can't arrest a man for not committing a murder? Both scenes are ridiculous, and a bit over the top. One thing that truly annoys me in this issue from an art point of view is that during most of the fight scenes, while they are well executed and choreographed, there aren't any backgrounds in any of these scenes. I understand the artistic reason for not including any in maybe the first panel of such a scene, but after that a few shadow lines or sketched in onlookers would go a long way to make the fight scenes more realistic. From an art point of view, penciller Ric Estrada continues to use those annoying bird’s eye views of scenes. None of them are all that worthwhile, and don’t add much to the scenes in question. The establishing shot of Pulsar shooting at the horse and carriage, the confrontation between Benjamin and Kade, and the final confrontation scene that shows the door is next to the lighting panel work fine. The Benjamin/Kade confrontation is particularly good in this regard, as their individual body language is well done: Kade is playing darts while Ben is livid.

To be honest, the best scene of the whole issue is the last page (heck, I’d argue the last panel, with that look on Projectra’s face). The whole idea of Karate Kid voluntarily choosing to live in the 20th Century just seems wrong. He had enough to prove in his present (the 30th Century), so the idea that he would turn his back on the Legion in general and on Projectra in particular doesn’t sit right with me. Of course, when we find out what’s really going on and why he’s chosen voluntary exile, it makes more sense, from a character point of view. But I’m not sure why the DC editorial folks chose to play it out this way. With the re-introduction of Princess Projectra here in the final panel, that particular storyline is coming to an end.

Final Notes:
This issue marks the last Karate Kid cover illustration by Mike Grell... Although the colourist Liz Berube is credited in this story, the letterer is still uncredited... The main letter in this issue's letter column is by Mike W. Barr, who would soon join the DC staff. He is most famous for creating/writing Camelot 3000 and Batman And The Outsiders. His letter is actually highly positive about the Karate Kid series... Pulsar returns next issue as well as in The Brave & The Bold Vol 1 #198, making him one of Karate Kid's more lasting adversaries.


Next Issue: Superboy and the Legion of Super-Heroes Vol 1 #228
Collapse