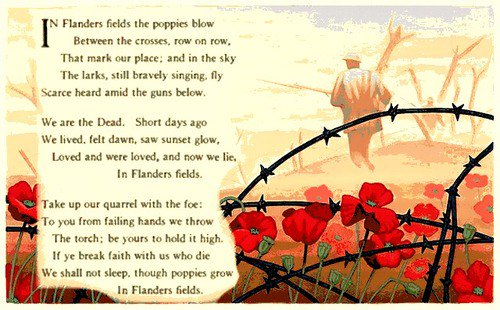 On this particular Remembrance Day, it seems doubly important to remember and give witness after some of the events here in Canada and abroad recently.

I just want to say *THANK YOU* to those who serve. And I want to thank those who served and died for our country and for the cause of peace all these years.

Well, in what was likely a poor decision on my part, given how sick I still am and how bad my cough is today, I went out yesterday to the Comic Book Shoppe</i> to pick up the comics that came out in the last month and to also get some more comic book bags and back boards so I can continue re-bagging the Legion of Super-Heroes comic collection, and the other stuff that I'm planning on keeping.

I managed to pick up all the comics that were waiting for me, as well as some preview materials and promotional stuff, but was annoyed to find that none of the comic bags and back boards were waiting for me, though they did have five bloody comic half-boxes for me. Which are uselessly going to sit in a storage room here at the house, since I don't have bags and back boards to put comics into and then into the comic half-boxes! Like I said, useless - and frustrating. :<

The main motivation for picking up the comics yesterday was because the first issue of the new Legion of Super-Heroes series (Version 8!) came out. Here is the issue, with the two variant covers included as well. 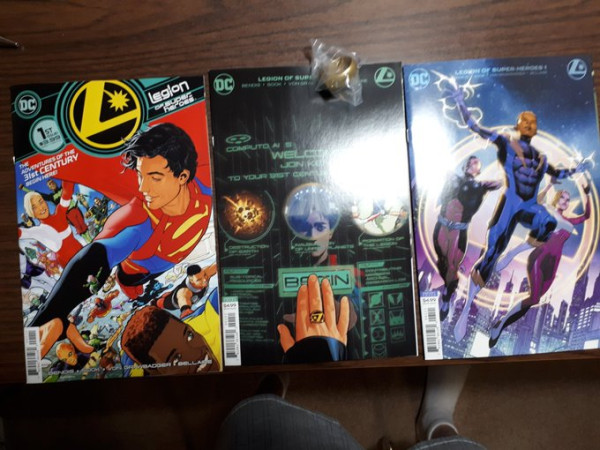 You'll notice at the top of the middle comic, there's a little plastic bag that holds a flight ring. These are the plastic flight rings that everyone who bought an issue of the comic received, while supplies lasted.

I'm not going to review the new Legion of Super-Heroes Vol 8 #1 here. (You'll have to wait on that review until I get to it, though I am going to ask folks whether they'd like to see current reviews as well as my re-reading of the classic Legion stuff.) I will make the following observations (hopefully without spoilers).

*****
1) This first issue of the new Legion of Super-Heroes title wasn't perfect (what comic is?), but it did have some excellent stuff going for it. Notably the artwork.

2) I had problems making sense of the opening sequence, and was somewhat confused by it. There is also an implication there as well that I'm not sure I understand, and why it's been handled that way.

3) I have to say that [REDACTED] got taken out pretty quickly, and doesn't seem a shadow of his former self. Demon Gangster? Geez. :(

4) I wasn't crazy about the name tags, as I found them difficult to make out. And what's the point of showing a name tag that's backward ('cause you're behind the character in question)?

5) I'm also not sure what is meant when Saturn Girl tells Superboy that New Metropolis, "the entire city", is Legion headquarters. Makes little sense to me, but hopefully writer Bendis will expand on that at some point.
*****

What does it come down to? I'm going to stick with the comic for now and keep reading, but I'm not really sure how I feel about this intro to the new LSH to be honest. I need to digest the first issue a bit more, to be honest. We'll see how it goes...

When it comes down to it, the only good thing that came out of yesterday's trip outside was lunch at Dunn's. A bowl of chicken soup with matzoh balls and a simple grilled cheese sandwich. Best part of the day.

But I'm feeling quite ill with whatever this bug is that I have today. Like I said at the top, probably not the best decision I've made this past weekend.

Going to lie down for a bit now. Hopefully nap.
Collapse