Since the new (2019) series of Legion of Super-Heroes has started up with issue #1 coming out this past month, I figure I'll post the current stuff as well as the classic stuff here. I'll start with their first new appearance in Superman Vol 5 #14... 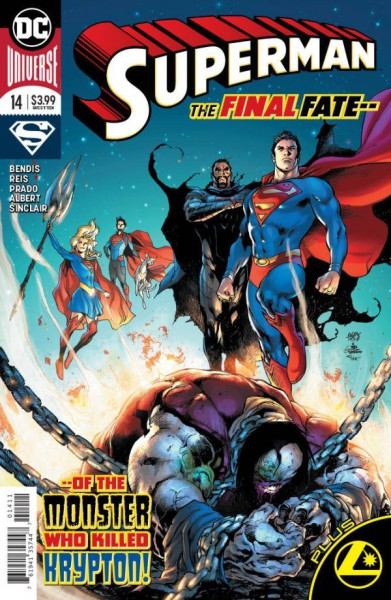 
Synopsis:
The issue opens with the House of El meeting with a large number of representatives from planets from across the universe. The House of El consists of Superman, Superboy, Supergirl, Krypto, General Zod, Ursa, and Lor-Zod. Superman says that the galaxy is on the brink of intergalactic war and that the lies and secrecy that are tearing the universe apart ends now.

The scene cuts to the day before. In the ruins of Krypton, Jor-El and Superman are in a spaceship. They cannot go outside due to the Green Kryptonite radiation from the ruins. Another ship also arrives in Krypton’s ruins. This ship holds Zod, Jax-Ur and Rogol Zaar. Seeing the ruins of Krypton enrages Zod, and he immediately attacks Zaar, breaking the deal they have. Zod tells Jax-Ur that their deception is over and to join him in attacking Zaar. There is a massive brawl in which the fight causes the side of the ship to be blown out and everyone is sucked into space. On Jor-El’s ship, Superman says that the radiation is going to kill them and that he has to go outside and save them all. Jor-El says that the radiation will kill Superman, too. He gives Superman a shield to wear that will protect him from the radiation for a short period of time. However, the shield is delicate and is meant for sightseeing only. Superman puts on the shield and races into space. Superman sees that Rogol Zaar is also being harmed by the Green Kryptonite radiation, and then realizes that Zaar is also Kryptonian. Regardless, Zaar and Zod continue fighting each other. Suddenly, Superboy (Jon Kent), Supergirl and Krypto enter the scene. Zod and Superman team up and punch Zaar, and then Supergirl strikes Zaar with a massive axe. Jor-El then tells the House of El to get out of there immediately or they will all be dead. Suddenly, huge Thanagarian warships appear on the scene - the Thanagarian Black Guard, the elite of the Thanagarian forces. The Thanagarian Black Guard exit the warships and say that the House of El is under arrest, all of them.

The scene shifts to Thanagar, where Ro-R-Yden, of the Thanagarian Security Council and the Chief of Intergalactic Intelligence, says that Rogol Zaar is in custody. He says that Jor-El is also under arrest, though Superman, Superboy, Supergirl and Krypto are not. Before Superman gets an answer to the question of what the charges are against Jor-El, a Khund fleet suddenly appears on the scene and attacks Thanagar. Ro-R-Yden yells that this is why they came to get the Man of Steel - the galaxy is being ripped apart! Ro-R-Yden says that nobody trusts anyone anymore and that nobody is policing the outer rim. All of this is over Krypton and Jor-El’s secrets from a hundred quarks ago.

And the scene cuts back to the present, with Superman finishing Superboy’s statement about an organization that can help neighbouring systems. Superman says that disasters like Krypton occur due to secrets and lies. Because leaders gather in secret. That they need to have conversations out in the open and in the public trust. Superman says that the House of El demands a complete interstellar truce across the entire known galaxy. And in exchange, they offer the immediate formation of the United Planets. A body of equal representation from each planet that will gather together and conflicts will be resolved and truces broken will be brokered in public. And when someone needs help everyone will know where to reach out to help. The assembled leaders from all the various planets across the galaxy just stand there in silence. Superman says that this is a lot to ask but that the time has come, and that there is no other choice. The gathered galactic leaders still just stand there in silence. No one offers to be the first planet to join the United Planets. Superboy asks Superman what they should do to get these galactic leaders to believe them.

And as if right on cue, the Legion of Super-Heroes arrives on the scene. Saturn Girl says that they have come from the 31st Century, and that they have come to tell everyone that this day was the day that changed everything. That this day put the whole galaxy on a path forward a real future. Cosmic Boy says that the decision to form the United Planets saved everyone. That in the 31st Century, this day of August 18th is known as Unity Day. Lightning Lad says that the Legion of Super-Heroes have dedicated their lives to the ideals of super-heroes in direct honour of this very day. Saturn Girl says that they are here with a gift. She says that each era has things it can teach the others, and that the best way for that to happen “is for you to join us in the 31st Century." Superman responds that the offer is a great honour, but that he has too many responsibilities in this era to leave. Saturn Girl replies that she was not talking to Superman - that her offer was to Superboy. Saturn Girl asks Jon if he would do them the honour of joining the Legion of Super-Heroes. The story continues in the next issue.


Commentary:
Right off the bat I will state here that I have no comments to make about the Unity Saga storyline here and what is going on in the tales running through the Superman family of comics, except as it relates to the Legion of Super-Heroes. I don’t read the comics, other than the Legion appearances, and have no idea of what’s been going on in the Superman titles. So, with that out of the way...

The appearance of the Legion in the story is just perfect. “We bid you greetings from the 31st Century...” begins Saturn Girl. It’s so very corny, and just perfect. The Legion of Super-Heroes debuted at a time when friendly and unfriendly visitors alike would greet mankind in exactly this manner at drive-ins all over America. I can well imagine that noted history buff Cosmic Boy (assuming that this one has the same traits) wrote Saturn Girl’s opening lines. And let’s be honest about how like the Legion it is to appear in the present day at a significant moment in history, as if their mere presence blesses events. In this case, I suspect there’s more going on, but it might be construed as a good omen given that none of the galactic leaders has yet agreed to join the new United Planets as yet. I guess the next issue will tell the tale in that regard, huh? :)

One thing I thought was interesting was the fact that author Bendis goes against the grain of just having the three original members of the Legion (Cosmic Boy, Lightning Lad and Saturn Girl) being the first to approach Superboy. It is a smart move to understand that the Legion needs to be reintroduced with a splash and having the entire Legion show up to recruit Superboy is a wonderful break from tradition. This conveys the primary and unique feature of the Legion, which is its massive and unique roster of characters. However, that implies a lot of power in order to transport the entire roster (twenty-eight, if I’m not miscounting) through time to this eventful moment.

Insofar as the members of the Legion of Super-Heroes are concerned, the Legionnaires look great, but different in this incarnation of the team. Twenty-eight Legionnaires are visible in the double spread on pages 20 and 21, many of them familiar to long-time Legion readers for the most part (Wildfire, Ultra Boy, Star Boy, Brainiac 5, Saturn Girl, Lightning Lad, Cosmic Boy, Timber Wolf, Bouncing Boy, Colossal Boy, to name a few), but there are differences in race and species among the Legionnaires, while others are totally new or designed differently to be unrecognizable for the moment. That said, it is good to see the Saturn Girl, Lightning Lad and Cosmic Boy (the three Legion founders) front and centre in the limited space given the Legion in this issue, though I was surprised to see that Cosmic Boy is Asian and that Lightning Lad is black (but seems to have the reddish hair, so at least that’s intact).

I don’t really have all that much else to add here, simply because there’s not much to really see of the Legion in this story, but I expect there will be more to say about the Legionnaires when the story continues in Superman Vol 5 #15. I will add that as a Legion fan, this comic isn’t worth the purchase price given the content involving the Legion. But it is their first, new appearance in current continuity, so there’s something to be said for that, right?