I'm still pretty sick with whatever this bug I've got is, but I've woken up this morning with a slightly more positive attitude. In that regard, here's one of my favourite videos from the amazing Delta Goodrem...

Just a terrific song, with a good message to it. :) 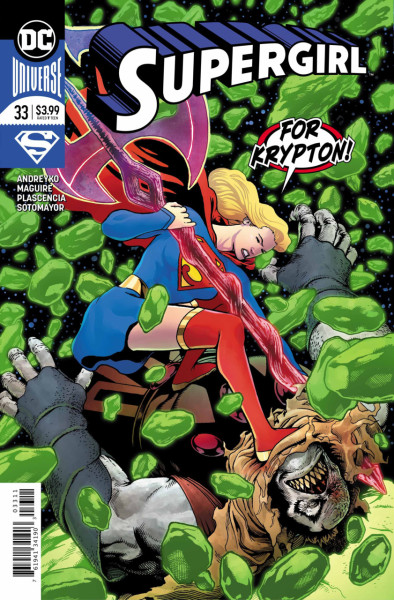 
Synopsis:
The issue begins with a recap of some of the events that Supergirl has experienced leading up to the events of Unity and the fight against Rogol Zaar in the comic [since I’ve not read these comics, I’m just generalizing it here].

The scene switches to the present on Thanager, with the Els (Superman, Supergirl, Superboy (Jon Kent) and Krypto) and General Zod in the Thanagarian prison they were taken to just before the idea of the United Planets was thrown out before the throngs of U.P. member worlds. The cell holds the burned out husk of Rogol Zaar’s axe. As Supergirl notes, it is a weapon that has racked up a body count - and it seems to belong to her now.

The story then flashes back to the ruins of Krypton and the battle in space (see Superman Vol 5 #14), though more from a Kara Zor-El specific angle. She flies in, and reclaims the axe as hers. Using the axe against Zaar, she unloads an energy blast that shatters his eye. Zaar is hurled into a massive grouping of Green Kryptonite rocks. He boasts that the only way she can defeat him is to kill him. Kara thinks she’s almost okay with that idea, but before she gets a chance to do so, the Thanagarian Black Guard fleet arrives, and takes everyone captive.

Back inside the cell, Kara reflects on how she is always leading with her pain and anger. However, with Zaar in custody she feels that the rage she’s been feeling has left her.

A Hawk guard comes to escort them to the Security Council. As per the events of Superman Vol 1 #14, a Khund fleet suddenly appears on the scene and attacks Thanagar. Ro-R-Yden yells that this is why they came to get the Man of Steel - the galaxy is being ripped apart! Ro-R-Yden says that nobody trusts anyone anymore and that nobody is policing the outer rim. Ro-R-Yden says that this needs to stop and that Jor-El said that Superman knows what to do. Superboy then interjects and says that he knows what to do. Superboy asks if they can call a time-out.

The scene cuts to where Superman is making his appeal for the formation of the United Planets, and asking who will join them. The gathered galactic leaders still just stand there in silence. No one offers to be the first planet to join the United Planets. Kara tells Jon that she can’t read them, it’s a tough crowd. And then a portal opens up...

...and the Legion of Super-Heroes emerges from the time stream. The scene plays out similarly to how it went in Superman Vol 5 #14, but is much simpler in dialogue on the part of Saturn Girl and Karate Kid.

The scene shifts again to the present, and Supergirl is communicating with her Brainiac 5-look-alike, Z’ndr Kol, the adopted son of Gandelo [whoever that is]. He now runs the Trilium Collective, and is their emperor of sorts. Kara and Z’ndr flirt before the transmission is lost.

The scene shifts again to a prolonged and superb scene between Kal-El and Kara. She tells him that she’s now decidedly at peace. The two talk and she tells him that she admires his diplomatic abilities, that everyone admires him, and that the universe loves him even if he can’t see it. And that she’s proud of her cousin. And she decides that she’s going to return to Earth and make it her home again. He asks if she needs help getting home, but she says that she was a science prodigy, and has incorporated Jor-El's teleportation system into her suit.

And with a fond farewell, where both admit they love each other, Supergirl and Krypto are back under the yellow sun of Earth. Below her lies National City.


Commentary:
Once again, I’ll reiterate here that I have no comments to make about the Unity Saga storyline here and what is going on in the tales running through the Superman family of comics, except as it relates to the Legion of Super-Heroes. I don’t read the comics, other than the Legion appearances, and have no idea of what’s been going on in the Superman titles. That said, I will say that one of the things that appealed to me about this issue of Supergirl’s own comic was the feeling of hope that gets stronger and stronger as the issue runs its course. It’s a refreshing change from what I’ve read of the DC universe the last few months.

There’s not a lot to say about the Legion in this story, to be honest. They appear in a double-page spread that shows us a much smaller group of Legionnaires than the same spread did in Superman Vol 5 #14. The dialogue here is very basic, as Saturn Girl introduces the group as the Legion of Super-Heroes, and Karate Kid says that they are there to celebrate Unity Day. He didn’t have a speaking part in the 3-pages that featured the Legion’s appearance in Superman Vol 5 #14. The Mission Monitor listing above gives you a good idea of which Legionnaires are more featured here then others, but it seems a solid group. They aren’t around long enough to give any idea of how their upcoming new series will go, but it’s a nice two-page spread that speaks of benevolence.

Once again, this issue of the comic isn’t worth purchasing if you’re a Legion fan, since you only get two pages of the Legion here, and only two sets of dialogue. But it’s a different view of the team from that presented in Superman Vol 5 #14, so one takes the Legion appearances where one gets them. I suppose.