Today is the start day of Hanukkah, the Jewish Festival of Lights that is usually always occurs early in the month of Christmas, and lasts a bit longer than Christmas does. Well, actually Hanukkah begins at sundown tonight, so we're all good.

I want to wish everyone out there a very Happy Hanukkah.

The gifts I would like this year aren't really all that complicated. Well, most of them anyway. First off, a year (relatively) free of illness. Second, a year free of shoulder/back/neck/arm/hand/anywhere else pain (caused most likely by the problems with my cervical spine) and foot pain (caused by whatever). Third, for my diabetes management to be under better control. For life to be less stressful for the most part. For an end to the coronavirus and a return to some semblance of social normality. And finally, for peace on earth, and an end to war.

So Chag Sameach to all my Jewish friends, and enjoy the Festival of Lights for this year!

Just a reminder to folks.

This seems like a good day for a donation to your favourite or preferred organisations waging these advocacy battles around the globe. Oh, and if you've got some suggestions for organisations worthy of support, please leave a note in the Comments section about this.

Time for another classic re-read of a Legion of Super-Heroes comic, this time out... The Earthwar Saga continues. Enjoy! :) 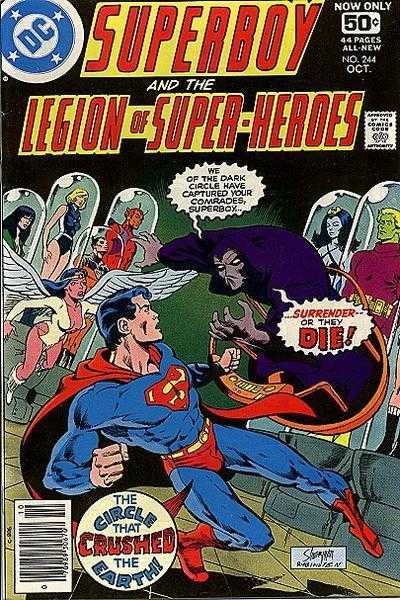 Opposition:
The Khunds; The Dark Circle; and the big reveal...


Synopsis:
In the first chapter that is nameless, In space, the eight Legionnaires who had been on Weber's World (Wildfire, Superboy, Ultra Boy, Mon-El, Dawnstar, Element Lad, Sun Boy, Colossal Boy) head for Earth at best speed to help against the Khunds. They are accompanied by Ontiir of Tsuron, head of Security for the Weber's World conference. Colossal Boy expresses doubts about Ontiir's motivation in coming to Earth with them, and summarizes the events of the Earthwar thus far and all the twists the story has seen thus far.

Dawnstar alerts the others that there is something up ahead. The Legionnaires come upon a heavily armed space station that attacks them. The station proves to be no match for this group of Legionnaires, and when they board it, Dawnstar says that there is indeed life on board the station deep within its heart. There, they find a massive block of inertron. Element Lad transforms the inertron into helium, and reveals the Dominator ambassadors contained within. With the diplomats free, they tell the Legionnaires that Ambassador Relnic is an agent of the Dark Circle and it was through his treachery that they were teleported away and captured. More importantly, the Dominators promise military support to fight off the Dark Circle and Khundish troops.

In Chapter 2, "The Last Line of Defense," on Earth, the Khunds are using a massive cannon to get past the Legion Headquarters force field. They face "annoying, but unimportant" defenses from the automated systems, but eventually make their way to the armoury to plunder the secrets of the Legion. However, they are met inside by the four retired Legionnaires - Saturn Girl, Lightning Lad, Bouncing Boy and Duo Damsel. Without the Legion code to hinder them, the former Legionnaires mop the floor with the Khunds. Lightning Lad laments the fact that he and Imra were interrupted on their honeymoon and forced back to duty. Imra says that she knows that, but also that they couldn't live with themselves if they didn't protect their adopted world. Reading the mind of the unconscious commander of the Khunds, Saturn Girl learns that the Khunds are expecting reinforcements from the Dark Circle. The situation seems hopeless.

At Science Police Headquarters, the S.P.s are fighting the Khunds to no avail and are falling like flies. S.P. Officer Shvaughn Erin is doing her best, but is captured by a group of Khunds. She is saved when Karate Kid appears from a time bubble, and attacks the Khunds, taking them down. He tells her that he came to Science Police HQ as he hadn't gotten any response from Legion HQ. He figures that since he was on detached duty in the 20th Century for a while, someone there can tell him what's going on. Shvaughn tells him that she can bring him up to date.

Out in space, in Chapter 3, "The Secret of the Earthwar," the remaining eight Legionnaires arrive, and disable the Khund invasion fleet. Element Lad points out that they can't hope to stop the Khunds this way, and Wildfire concurs, saying they'll just bring hostages to force the Legionnaires to surrender. He and the rest of the Legionnaires head Earthside, to the U.P. Presidential Palace to link up with Earth's defense forces there.

Back at Legion HQ, the Saturn Girl, Lightning Lad, Bouncing Boy and Duo Damsel are monitoring the others' communications, and Lightning Lad says that he's glad that Wildfire chose this crisis to mature as a Leader. The four decide to head towards the Presidential Palace as well. They get into an armoured tank to try to bust through the surrounding Khund forces. However, once they emerge from Legion HQ, an anti-matter grenade thrown by one of the Khund soldiers renders the battlewagon useless. Duo Damsel and Bouncing Boy are knocked unconscious. Saturn Girl and Lightning Lad leave them, and head towards the Presidential Palace.

At the Presidential Palace, the eight free Legionnaires arrive and take on the Khund forces. They mop them up quite easily and handily and then proceed into the building. In the central chamber, they face the five leaders of the Dark Circle, who flaunt their Legion and Substitute hostages. They threaten Earth with destruction via a negasphere if the remaining Legionnaires do not capitulate. However, the Legion chooses to fight instead. With a look between them, Superboy, Ultra Boy, Mon-El and Wildfire surround the negasphere so as to absorb/deflect the negative energy of the explosive device, while the other Legionnaires fight the Dark Circle. The Negasphere explodes, but even with the force contained everyone except Superboy is knocked unconscious. Saturn Girl and Lighting Lad arrive, overjoyed to see that the Dark Circle has been defeated, though the former is shocked to learn they survived a negasphere. However, the arrival of Karate Kid and S.P. Officer Erin puts a damper on things as well, as they have bad news that it's not over. Ambassador Relnic is revealed standing nearby, and the truth is revealed. Ambassador Relnic has never been there, for he has been replaced by - Mordru! This story concludes in the next issue!


Commentary:
And so we come to the fourth, and penultimate, chapter of the Earthwar Saga... The story itself is very well executed from a writing point of view The plot moves along quickly, as more and more characters take part in the action. The scenes shift nicely from combat/conflict matters to chatty, talkative scenes, and I appreciated how Levitz moved between the scenes this way. The story itself is well-plotted, and the big reveal at the end of the issue surprised me the first time I read the story back in 1978 or so. One thing that I really liked is that it made sense that Karate Kid would return, and his arrival was at a nicely timed moment to help Officer Erin. It's also clear that Saturn Girl and Lightning Lad were being positioned for a return to active Legion duty, but that Bouncing Boy and Duo Damsel were not. This fits very nicely with the personalities of the characters in question, and is a great nod to author Levitz's understanding of these four (ex-)Legionnaires.

I only have two minor problems with the story: Saturn Girl and Lighting Lad leave Duo Damsel and Bouncing Boy in the tank when they fly off to the Presidential Palace. Really? Shouldn't they have taken them with them? I would think that they wouldn't want their friends to be captured or killed by the Khunds. Second, when the other Legionnaires confront the Dark Circle, why let them negotiate at all? Why not take them down as soon as they fly in, and *then* talk with them? It seems a bit too much of a "suoer-villain-explains-his-plot" contrivance for my taste.

Art-wise, I cannot help but think how beautiful this issue would have been pencilled by James Sherman. Joe Staton does a really adequate, but very good, job here, but his space scenes aren't as...cosmic...as they should and need to be. The inker on the issue, Joe Giella, has no experience with the Legion, and it shows in his work here. One example is that on page 23, Lightning Lad is shown to be with the eight Legionnaires and Ultra Boy is drawn twice; they should have been Sun Boy and Element Lad, respectively. This strikes me, to be honest, as a bit of a rush job.


Final Notes:
This is the fourth and penultimate part of the Earthwar Saga, and concludes in next issue's finale of the story...

The title blurb on the issue cover is "The Circle That CRUSHED the Earth," while the actual title on the title page is "The Dark Circle That Crushed Earth"...

Karate Kid arrives in the 30th Century at the end of his solo series. He has brought his friend Iris Jacobs with him, still in her Diamondeth state. His last appearance was in Kamandi, The Last Boy on Earth! Vol 1 #58...

In a bit of hyperbole, the omniscient narrator groups Dawnstar in with "the fighting cream of the Legion, each ... capable of destroying a starship singlehandedly." A bit melodramtic I thought, and not wholly accurate when it comes to Dawnstar, but...

Saturn Girl and Lighting Lad are upset that the Khund invasion interrupted their honeymoon, even though chronologically they were married more than six months (issues) before...

Shadow Lass appears as a hostage on the cover and in the story, although she was never shown actually fighting against the Khunds...

In the scene where the hostage Legionnaires and Substitute Legionnaires are shown there is an additional mystery hostage present. In the upper right-hand corner on page 21, a man in a smock who looks to be a scientist or doctor can be seen clearly. He is definitely not a Legionnaire...

This issue boasts three Joes on the creative staff: penciller Joe Staton, inker Joe Giella, and cover inker Joe Rubinstein. That must be a record of some kind.

Next Issue: Superboy and the Legion of Super-Heroes Vol 1 #245
Collapse