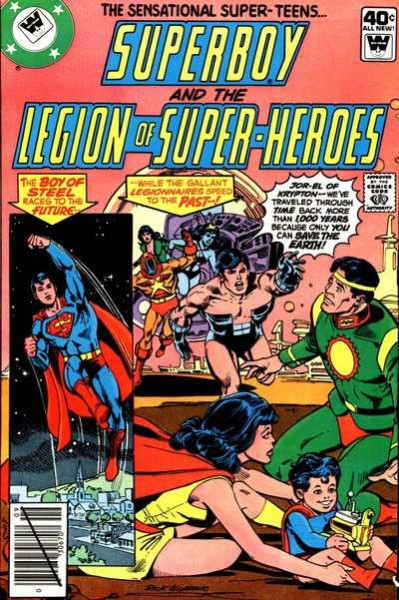 
Synopsis:
In Smallville, Superboy is completing his morning patrol and then heads to the General Store to help Pa unload an inventory of some canned goods. He changes back to Clark Kent in mid-air as he flies, hoping no bird-watchers have spotted him, which earns him a chastised talking-to from Pa Kent for risking his secret identity. Clark says that it's not just his glasses that make his secret identity, it's also his posture, weight placement, and other factors. Clark carries several boxes out of the back room, and Lana Lang sees him. He quickly empties the boxes of their cans at super-speed, showing Lana that he was able to carry so many boxes because they were all empty.
After Lana leaves, Clark takes off his glasses and explains to Pa how he was able to empty the boxes at super-speed. While he is speaking to his adopted father, an alien being (blue-skinned, blobby in shape, with tentacle-like appendages) appears in a small flash of light and switches out his glasses with another pair, unseen by either of them.

Some time later at school, Clark's super-hearing catches that a construction worker is in danger from a runaway bulldozer. He uses his heat-vision to save the worker, melting the tar causing the bulldozer to mired down, but the effort melts his (non-Kryptonian) glasses. He fakes being blind and stepping on his fallen spectacles, and then rushes off before Lana Lang can see them. Clark is puzzled by how the glasses melted, as he hasn't used non-Kryptonian lenses ever since he found bits of Kryptonian glass in the ruins of the rocket which brought him to Earth. As he ponders matters on the roof of the school, a time bubble arrives and four Legionnaires emerge from it.

Cosmic Boy, Shadow Lass, Wildfire and Shrinking Violet tell him that they need his help, as 30th Century Earth is in danger. They tell him that two days earlier, their time, someone broke into the Superman Museum and stole the Time-Ray Projector used by the young Lex Luthor many years ago. Earlier this morning, their time, something mysterious happened in the city of Tokyo, a brilliant ray of light flashed out of the sky, and when investigators checked it out, all the inhabitants of Tokyo had disappeared. Thinking that perhaps the people had been hit by a Phantom Zone Ray, Cosmic Boy and his four teammates went to the Superman Museum and borrowed a Phantom Zone projector. In Tokyo, Cosmic Boy was proved partially right - the people had been projected into a different dimensional plane similar to or adjacent to the Zone, but they could retrieve them. At that moment, a possibly telepathic voice pounded into the minds of the people of Earth. An alien called The Gorgli informed Earth that it was their new Master, and demanded 10,000 human slaves or it would kill the 10 million Japanese taken from Tokyo. Humans make excellent manual servitors because of their five-fingered hands and opposable thumbs. Earth's reply was an all-out attack by the Science Police on his ship in orbit, but protected by some sort of light-activated force-field, the Gorgli destroyed all but one of the five patrol ships. That left the President of Earth and the U.P. Council little choice - they called in the Legion. With all the other Legionnaires on Brande's planetoid, Cosmic Boy, Wildfire, Shadow Lass and Shrinking Violet take their last remaining cruiser and attacked the Gorgli's ship, but they were soundly defeated and crashed back to Earth with their cruiser destroyed by some sort light-based attack. It was then that the Science Police told the four Legionnaires about the theft of the Time-Ray Projector from the Superman Museum. When the Legionnaires checked it out, they found a chronal energy trail leading back to Superboy's time - and that's when they remembered about Superboy's special Kryptonian lenses. Superboy guesses that it was the Gorgli who stole his glasses.

Accompanying the Legionnaires forward to the 30th Century, Superboy attacks the Gorgli's ship, which is protected by his Kryptonian lenses powered light effects, including the force-field. Unable to penetrate through, Superboy attempts to vibrate the ship apart by circling it at hyper-speed, but the Gorgli uses the Kryptonian lenses to strike down Superboy with a massive energy burst.

Superboy suggests that they go back in time to Krypton to acquite another of the Kryptonian lenses. Using the time bubble once more, the four Legionnaires and Superboy appear in the workshop of Jor-El on Krypton on the day that it exploded. Covered by Shadow Lass's darkness powers, Shrinking Violet slips out of the time bubble, shrinks down, and goes to get one of the Kryptonian lenses. However, Violet is spotted by baby Kal-El, but he decides to help the "pretty lady" and her friends and not give them away. The Legionnaires and Superboy return to the 30th Century.

Back in orbit of 30th Century Earth, the Gorgli is frustrated and angry that the deadline it set has come with no answer from Earth. As it prepares to destroy the planet from orbit, the ray blast is intercepted by Superboy, now enhanced with the power of the counter-ray built by the Legionnaires using the Kryptonian lens they acquired. As Superboy and Wildfire attack the Gorgli's ship using the enhanced lens' power, the Gorgli's ship is destroyed. Superboy races in at super-speed, saving the Gorgli so it can be imprisoned for its crimes, while also recovering his Kryptonian lenses so that the people of Tokyo can be restored.

Some time later, Superboy regards Shrinking Violet sitting on one of the lenses, and says he can't help but feel that he's seen her this way before. Violet tells him to sit down, and says, "You see, it turns out we've been friends for longer than I thought..."


Commentary:
This story from the pen of Gerry Conway is an entertaining tale in its own right, but reads like one of the less-than-classic Silver Age Legion stories in which we used to get ten pages of Superboy in Smallville going through the paces at the Kent General store and trying to hide his identity from Lana Lang and then five or so pages of the Legionnaires running around and doing things and then the story coming to a conclusion with both the Legionnaires and Superboy finally working together. And essentially, that is what this story gives us.

It's an entertaining story for all of that, but it's very dull when it comes right down to it. The basic premise with the theft of Superboy's Kryptonian lenses in the present and their use by Sden...err, the Gorgli...in the 30th Century is pretty decent, but the story is dull in a lot of ways as there's a great deal of exposition in the story. Six and a half pages are devoted to explaining to Superboy what happened in the 30th Century that brought the Legionnaires back to his time, and while there are a few action sequences here (notably the Science Police attacking the Gorgli's ship and the Legionnaires doing the same thing shortly after), it's just...boring. You'd think that a story with time travel and the alien threat would make for a good romp and feature a bit of action to it, but it doesn't. My favourite moments in the story are when Wildfire tells Superboy about how it felt when the President of Earth approached the Legionnaires for help with the threat, and the bit where baby Kal-El catches "pretty lady" Shrinking Violet taking one of the lenses in the Krypton scene. Speaking of the Krypton scene, I do have to wonder why Jor-El, Lara and baby Kal were included (dare I say shoehorned?) into the story? Perhaps the Superman movie had something to do with it? However, surely there must have been some Kryptonian lenses in the Superman Museum in the 30th Century that could have been stolen by the Gorgli, rather than the convoluted trip back to Superboy's time. It was also a nice touch to bring back, even if only in a mention, the Time-Ray Projector used by the young Lex Luthor back in Adventure Comics Vol 1 #300.

The artwork in this issue is a mixed bag, I think. Joe Staton's pencils are quite vibrant and exciting this issue, with some interesting poses and expressions on the face of his characters. However, the inks by Vince Colletta reduce the effectiveness of Staton's work, and give the issue a somewhat muddy look to it at times, with sequences not seeming as sharply focused. The page styles varied from page to page quite a bit. The splash page looked startlingly like George Tuska's work, page 4 was pure Staton and Giordano, and page 15 looked a lot like Ric Estrada's work. That said, the story does have the look and feel of a Silver Age classic Legion story, so in that sense accomplishes what I think (and hope) it set out to do.

Oddly enough, when I sat down to re-read this issue of the Legion stories, I didn't actually remember the story at all! I'm not sure what that says about the Gorgli's one and thankfully only appearance, but while enjoyable to (re-)read, the story just fades into the background, I guess.


Final Notes:
The cover of this issue is misleading. The Legionnaires do travel back to ancient Krypton, but they don't ask Jor-El for his help...

Once more, Shadow Lass appears on the cover of the issue without a cape. Cover artist Dick Giordano does not seem to understand that Shadow Lass has a cape...

For the third straight issue in a row, there is a "Roll Call" kind of section at the top of the splash page. It is a box that shows a facial cut of the Legionnaires in this story, with their names underneath. Superboy appears in the panel that incorporates the "Roll Call" box, but isn't in that actual section...

The Time-Ray Projector used by the young Lex Luthor appeared in Adventure Comics Vol 1 #300, when young Lex Luthor sent the robot version of himself, Urthlo, to the Legion's time to destroy the team...

The Legionnaires mention that they are the only four members on Earth, and that the others are all on R.J. Brande's asteroid home. However, last issue we saw five different Legionnaires on Earth, all working to repair their ruined headquarters...

The villain of this issue, the Gorgli, is reminiscent of Sden the alien sorcerer from Superboy and the Legion of Super-Heroes Vol 1 #230, though he is blue rather than green, not all that large, and less menacing in appearance. Oh, and the tentacles are much, much smaller...

Last issue promised that this issue would feature, "This Is Your Life -- And Death, Brainiac 5!" which is also promised here for the *next* issue...

This is the last issue of the Superboy title that features Smallville, Ma and Pa Kent, and Lana Lang. In a few issues, this series will morph completely into The Legion of Super-Heroes Vol 2, and Superboy and his Smallville cast will move to their new series called The New Adventures of Superboy Vol 1.

Next Issue: Superboy and the Legion of Super-Heroes Vol 1 #256
Collapse