It's March 1st. The start of a new month.

February was very unkind to me, and that's putting it mildly. The health issues I've had have been the worst of it. The leg pain that I've been suffering from for some time now has gotten steadily worse, and February was a bad month with it. To a large extent, I've been unable to walk all that much for some time now, and there were days when the pain incapacitated me several days, the only relief I've had coming when I've been able to spend a chunk of time with my feet up. On the last Thursday of February, I went for my usual footcare appointment. My two pinkie toes have blood vessels that are very close to the surface, and the regular person who takes care of my feet wasn't there. Well, guess what? Yep, she cut the toenails too close and my two toes have been bleeding on and off for three days. And that's not to mention the sharp, burning pain on the toes and the fact that I can't wear socks or have a blanket over the toes else the pain is a lot worse. for long periods of the day, the only relief I've been able to get being spending time with my feet up. Add to that the sometimes severe abdominal and back pain that I've had for the last our months or so, and my life was pretty much a misery in February.

The weather for February was a mixed bag pretty much, with some pretty nasty snowfalls and bitterly cold days, but there were days where it was feeling almost like spring was around the corner with relatively mild temperatures. Just a very bizarre weather month. Who knows what's going to happen weather-wise in March, but hopefully it will be relatively mind.

Throw in the COVID-19 pandemic that still continues, now with variant forms of the virus, and even with the vaccine rollout starting in earnest, the virus is still winning. Hopefully, we won't see a third wave of the virus. ::knock on wood::

Yes, there were a couple of good things that happened in the month, but truthfully, not a month to remember. So bring it on, March! :)

Today is my friend, Gareth Ryder-Hanrahan's, birthday! Here's hoping that you have a terrific birthday today, mate!

May the Goddess bless you with good health, good fortune, prosperity, love, happiness, and joy, and may a warm breeze blow at your back for the coming year. May your work in the roleplaying industry continue to be successful, may your Muse continue to inspire you in your profession fiction writing, and may all your writing be blessed with few edits!

Be well, be happy, stay safe and stay healthy!

Today would have been the birthday of Roger Delgado. 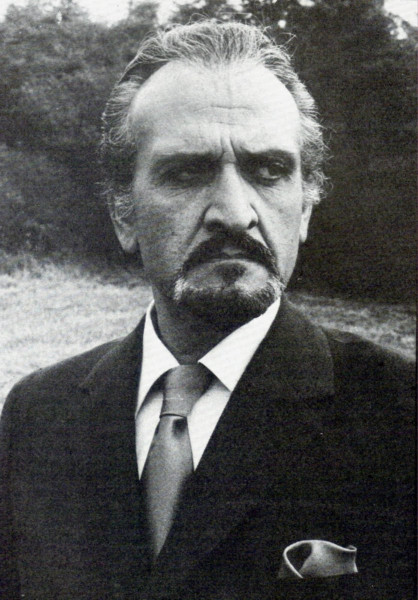 For the fans of Doctor Who... the Doctor has faced many foes over the years - Daleks (and their creator Davros), Cybermen, Sontarans, Ice Warriors, to name a few - but only one foe has stood the test of time as his equal. If the Doctor had gone the other route, followed the dark path... That was the premise for the character of The Master, the renegade Time Lord who was first portrayed by the late (and great) Roger Delgado.

Delgado begat the role of The Master, making his debut appearance in 1971 in the Doctor Who serial "Terror of the Autons", which also saw the first appearance of Katy Manning as Jo Grant. Delgado reappeared in a good number of subsequent serials during the Jon Pertwee years, and originally, it had been planned that the story of The Master would end and be tied up in one last serial, "The Final Game". However, in 1973 while filming another project, Delgado was sadly involved in a car accident and passed away, before his time, at the age of 55. Thus, "The Final Game" never saw the light of day.

While Roger continues to be missed from the world of Doctor Who, his influence on the tv show will never be forgotten. The Master may have regenerated countless times since that time, but Roger Delgado's legacy as the *first*, the original, the one *TRUE* Master is available for all to see. Personally, I adored Roger's performance as The Master, and have felt that none of the actors who've since taken the role on ever did or have done it justice (though Anthony Ainley had his moments). I still love going back and watching some of the Delgado serials/episodes of Doctor Who, and watching his sophisticated and refined performances.

So lift a glass today in memory of Roger Delgado, the first, the original, and the *best* Master, who would have turned 103 years old today.
Collapse