As mentioned elsewhere in my blog and in other places, one of the roleplaying games that I've been eagerly awaiting is The Troubleshooters RPG, an action-adventure tabletop roleplaying game based on the Belgian and French comics of the 1960s and 1970s (such as Tintin, Spirou, Blake and Mortimer, among others). Well, I've got my Kickstarter-backed pledge materials and they are...gorgeous! :)

To start with, there is The Troubleshooters RPG game rulebook itself, a lovely 236-page full colour rulebook with highly readable text, a lovely layout, and delicious artwork that is totally evocative of the game that is being presented here. Here are two photos, one the exterior cover with the dust jacket, and the other an interior photo from the book. 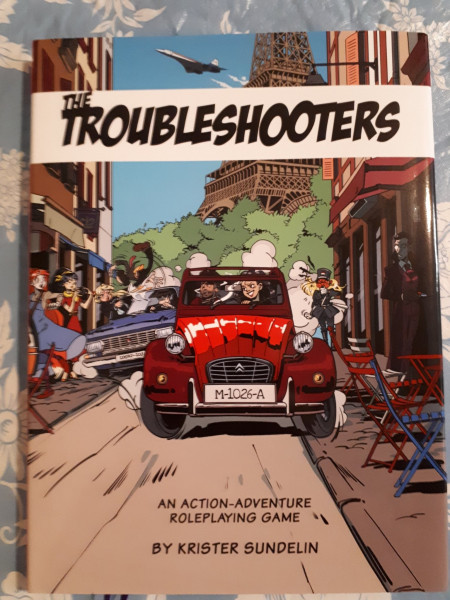 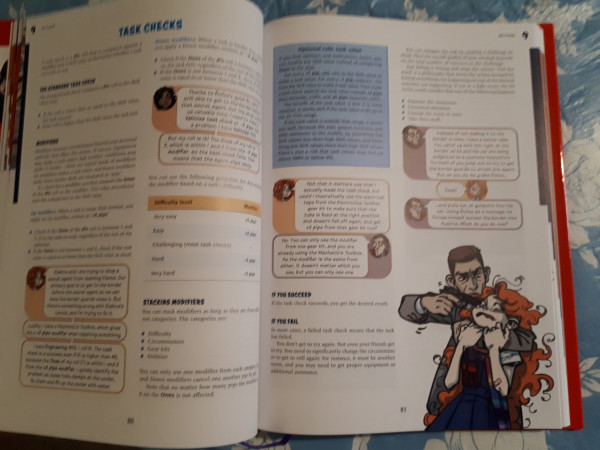 There is also a full fledged adventure, "The U-Boat Mystery," a 68-page full colour mystery and adventure for the game that has stunning artwork and lovely maps and blueprints. Here is both the outside cover and an interior photo from the book. 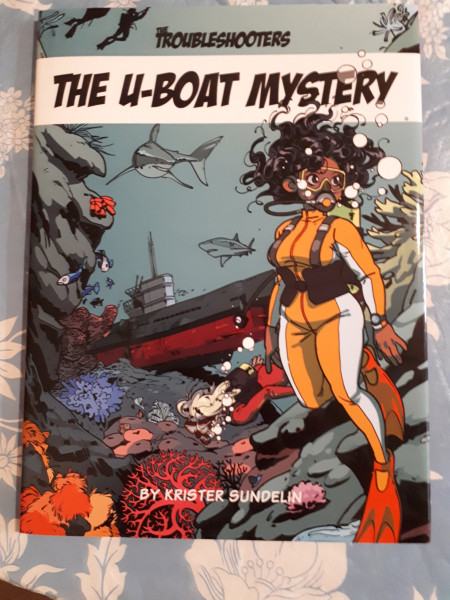 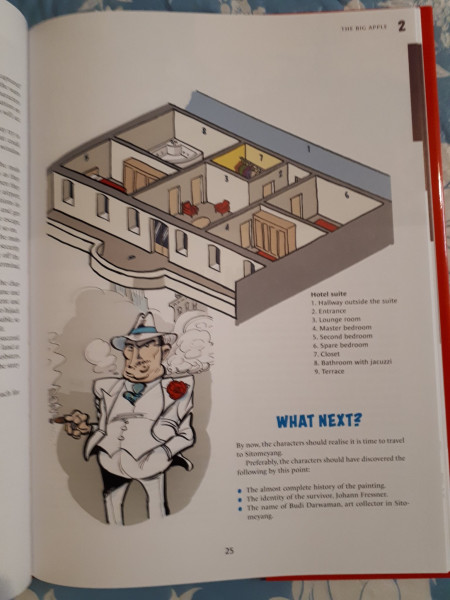 And what sort of roleplaying game would this be if one didn't have a GM Screen to go along with the game? Well, fear not, 'cause The Troubleshooters RPG definitely has that in spades, here called the Director's Control Display! Here are three pics of the Screen material, the first being the sheet with a description of the game item, the second being the English language panel from the Screen's exterior, and the third being an exterior view of the whole shebang. Just...brilliant! At least, the art is. 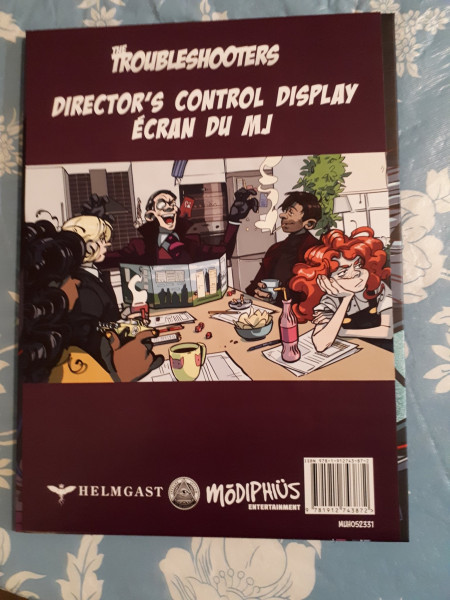 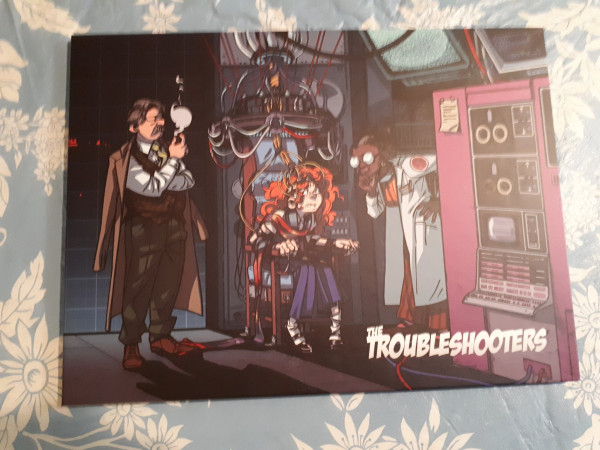 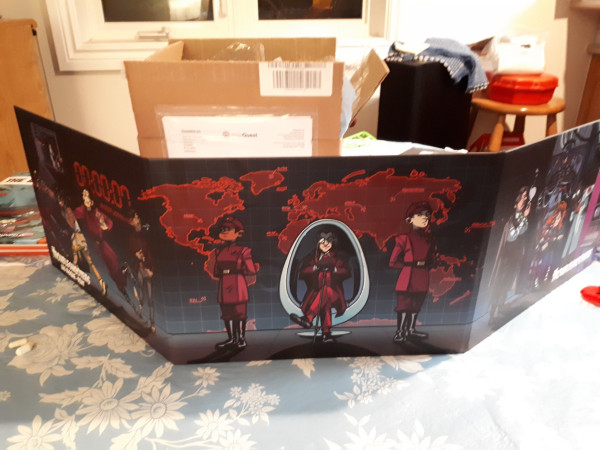 In addition, the game presents a City Map Pack with maps of Paris, Berlin, Brussels, and London, and a Chart and Blueprints Pack for "The U-Boat Mystery" that are extremely well done and provide all manners of visual support for the GM in the group. 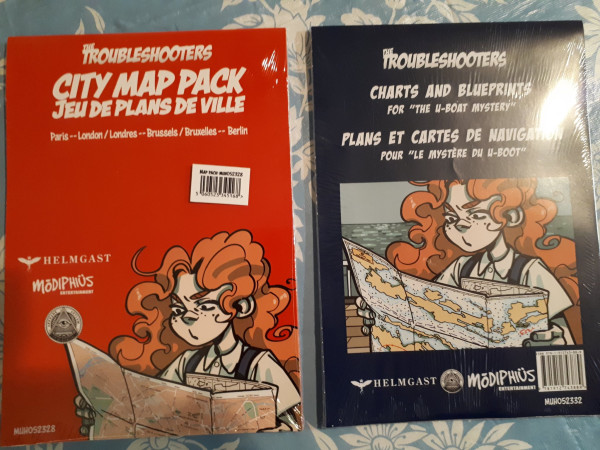 One can also add in a set of Passports and the Deck of Things to the game, if one desires. There are two types of Passports, regular and international, and these come in sets of 3 and 5, respectively. The Passports are, to all intents, the character sheet(s) for the game, and also hold room for all sorts of visa stamps and the like. Very stylish, very chic, and very appealing (other than the passport actual size). The Deck of Things is a 55 card set of gear and equipment that characters can have in the game. 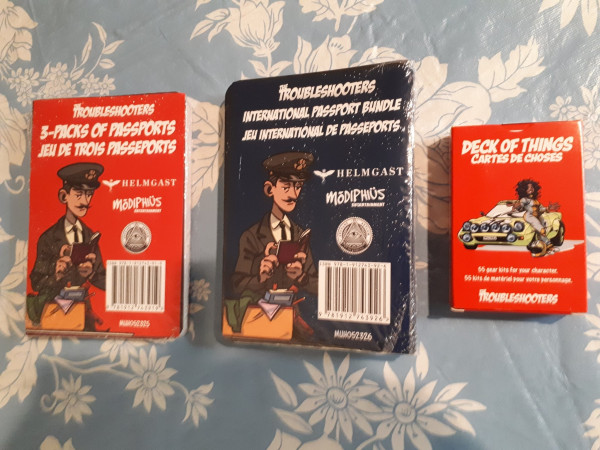 And finally, there is the Air Majestique airline ticket and folder, containing some stickers that one can use in the Passports (see above), and a few other goodies. There is also a set of dice for the game, including six D6s, and a set of D100s as well. One doesn't need them to run the game, but they are quite nice to have. :) 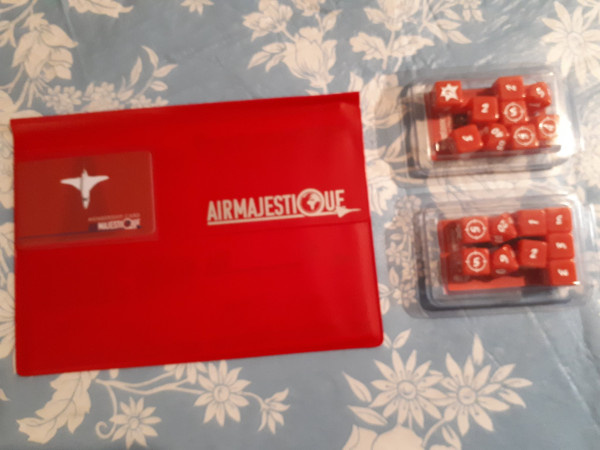 Overall, a terrific game with some lovely components, a bit gimmicky (but I was reeled in hook, line, and sinker by the Passports, and well one just *has* to *have* maps for stuff as well, right!?), in a genre that I've absolutely adored since I was 10 or 12 years old. So, who could resist? :)

It's been a relatively warm day, as November days go, but still quite col. Fortunately no rain (or snow). ::knock on wood::

I'll be gaming with the Friday night gaming group this evening; the players should be arriving within the next hour or so. Looking forward to it. Given the state of COVID-19 currently, we'll be taking the appropriate health precautions tonight as the group decides on when they get here, as per usual. Everyone wants to game, but knows we have to play safe in this time of the continuing pandemic.

Tonight, I'll be continuing on with the Friday night group's second adventure for the current DragonQuest RPG campaign, and I'm looking forward to seeing how the players and their characters deal with scenario material that I've got planned for them.

In the meantime, I need to go upstairs and make some supper.

Have a good evening, folks. :)
Collapse