As folks may know, I've been down in the dumps now for a while, due to some medical problems that I've been dealing with.

Yesterday afternoon, Kathy called to say that the Friday night players would be over to pick me up around 5:00 pm, as we were going out to supper, and then heading over to the RBC Bluesfest. They had all chipped in to buy tickets for the Lindsey Stirling show on Thursday, and that was their birthday present for and to me.

Kathy and company, including my goddaughter, Ellie, showed up at my place, and after chatting for a few minutes, we all headed out for supper. We headed over to the Kelsey's restaurant here in South Keys, and had a lovely, relaxed supper. Nothing fancy, just an average quality meal.

From there, we headed over to LeBreton Flats, where the RBC Bluesfest was being held. We got there in plenty of time for the concert, though the weather was starting to look ominous as the time for the talented Lindsey Stirling to take the Claridge stage approached, but the weather held during the course of the performance, and what a performance it was!

Lindsey Stirling is an American violinist, whose music first came to the attention of the public on YouTube, and quite talented. But she brings more than that to the music scene and to the stage performances. She put on a lovely show that incorporated various costumes, choreography, video images, and the lush sound of her violin soaring over an electronically padded blend of drums and keyboards. At one point, wearing a checkerboard pattern outfit, with her dancers in pink, plastic skirts, she showed how lithe she is and the athletic performer never stopped moving. I took a photo during the show with my phone, but it's not good, though here it is. 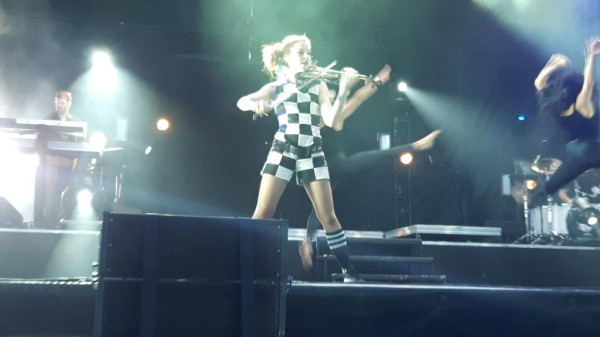 The show had all of her great songs in it (though I don't have a set list, so can't name too many specifics), but I enjoyed "Stars Align", "Shatter Me", and "Roundtable Revival", "Elements", "Transcendance", and a batch of others. She performed some of the tracks off her new, forthcoming album (which I'll be buying), and one of the new songs she unveiled, "Something Wild", was written for the forthcoming Disney movie, Pete's Dragon, and I rather liked that. Lindsey said that it was inspired by her own struggle for acceptance in the music industry. The show was just amazing, as she's really a pixie-like woman with stage presence and vitality, and really showcased her strengths. And the violin performance on this night was pretty darned fantastic, too! :)

By the time the performance finished, and we had made our way back to the parking lot, it had started to pour and the thunderstorm was about to hit. We took off, and went to Harvey's for a light, late-night snack, and Ellie and I took our insulin shots. I got home just around midnight, and was exhausted but somewhat elated by the evening (the lightning and all during the night probably contributed somewhat to the latter).

I crawled into bed after cleaning up and all, and prepared for a long Friday. It was a great evening of music, and I was glad that Kathy and the others thought of me in this regard. And believe it or not, I feel a bit better today. :)

Came home from work today to find a phone message on my answering machine.

The message was from Kathy, who has been in touch with the rest of my Friday night gaming group, and the news is that we are gaming this evening! This will be the first time that we've gamed together since the death of SteveB. I am so glad that we're going to game, and to be honest, I was afraid that the Friday gaming group was finished or at least going on a very long hiatus. That said, I know that this is going to be difficult for Kathy, but I think that it will be an enjoyable evening, where she can just put aside her on-going stuff and concentrate on something else. For me, the memories of SteveB as a gamer will definitely be present tonight. Kathy mentioned that she was also looking forward to getting into a game of Blue Planet again, and that she was looking forward to playing Desolation again as well.

This couldn't come at a better time for me, as I need all the help I can get at the moment playtesting the two scenarios of the Primeval Roleplaying Game that I've got for CanGames, 2011.

Anyway, will be eating an early supper (remembering to take my antibiotic!) and then heading out to the West End to play at Kathy's place. Expect to be home very late this evening.

Kathy called me after I got home this afternoon, asking me if I would be willing to take my goddaughter for the rest of Friday and into Saturday and part of the morning. Even though it was short notice, I agreed to do so, because (1) she's my goddaughter and 2) it's what you do for your good friends. So I'm looking forward to this.

Changes my plans, of course, but that's cool.
Collapse